"The Final Duel - Part 1", known as "The Fated Last Duel" in the Japanese version, is the two hundred and twenty-first episode of the Yu-Gi-Oh! anime.

This episode marks the beginning of the final Duel between Yugi Muto and Yami Yugi to determine the Pharaoh's fate. If Yugi wins, the Pharaoh will be able to return to the Spirit World; otherwise, Yami must remain in the "real" world for another 5,000 years.

Arrival at the Temple of the Realm of the Dead[edit]

Ishizu Ishtar: "Before the ritual can begin, the Millennium Items must be returned to the Stone from whence they came. The Eye of Wdjat will then peer into your soul Yugi, thus unraveling the Pharaoh's spirit from your own".

Solomon Muto: (thinking) "All of this began the day Yugi solved that puzzle. And it will all end the moment he returns it."
Yugi Muto: "All right, here it goes." (thinking) "(...) And my wish did come true the day I met my friends! And thanks to you Pharaoh, I'm ready to give it back."

Mokuba Kaiba: "Hey wait, so which one are we supposed to root for?"
Téa Gardner: (thinking) "If the Pharaoh wins, he gets to stay, which means we won't have to say good-bye."
Joey Wheeler: "We gotta root for Yugi guys, it's the only way to set the Pharaoh's spirit free."
Téa Gardner: (thinking) "Joey's right. I should want what's best for the Pharaoh, and that's for his spirit to move on. I have to be strong."
Yami Yugi: (thinking) "This is the first time in my life that I've hoped for my opponent's victory, but in order for this Duel to truly test our readiness to separate, I must fight with ALL my strength."
Yugi Muto: (thinking) "Pharaoh, now that you've left the Millennium Puzzle I can't hear your thoughts any more, but somehow I still know what you're thinking. And I feel the same way. If you've taught me anything is to put your heart into your Deck and Duel with everything you've got. And that's exactly what I'm gonna do!"
Seto Kaiba: "I guess we're about to find out who the true 'King of Games' is."

Joey Wheeler: "Yugi!"
Tristan Taylor: "You've gotta hang in there dude!"
Joey Wheeler: "The Pharaoh means business!"
Téa Gardner: "Yugi...!"
Duke Devlin: "Poor guy. Not only did he get clobbered by Obelisk, but thanks to "Swords of Revealing Light" he can't strike back!"
Yami Yugi: (to Yugi) "I told you I wouldn't go easy on you."
Mokuba Kaiba: "Check it out guys! Yugi is back on his feet!"
Seto Kaiba: "Big deal! There's still no way he can stand up to Obelisk"
Duke Devlin: "Then why is he smiling?"
Bakura Ryou: "Perhaps Yugi WANTS to lose so the Pharaoh doesn't have to go!"
Joey Wheeler: "No way, Bakura! Yugi may not wanna say goodbye, but there's no way he'd be happy about losing."
Téa Gardner: "So why the smile?"
Joey Wheeler: "He's having the time of his life! Think about it, Téa: this is Yugi's shot to finally PROVE himself! Usually he takes a back seat during Duels, but this time he's in control of his own Deck! So this time instead of standing BEHIND the Pharaoh, the two of them are face to face for one last Duel."
Téa Gardner: "Yeah, but can Yugi win?"
Joey Wheeler: "(thinking) It's gonna be tough. But if anyone can do it, Yugi can!"

Turn 1: Pharaoh Atem
Atem draws "The Tricky". He then Special Summons "The Tricky" (2000/1200) from his hand in Attack Position by discarding one card. Atem then Sets a card ("Bounce Spell").

Turn 2: Yugi Muto
Yugi draws "Swords of Revealing Light" and subsequently activates it. Now Atem's monsters cannot attack for the next three turns and all of his monsters must be face-up. Yugi then Normal Summons "Green Gadget" (1400/600) in Attack Position. Since "Green Gadget" was summoned, its effect activates, allowing Yugi to add "Red Gadget" from his Deck to his Hand. Yugi then Sets a card.

Turn 3: Pharaoh Atem
Due to Yugi's "Swords of Revealing Light", Atem cannot attack (3 more turns). Atem draws "Rebellion" and subsequently activates it to force Yugi's "Green Gadget" to attack its controller. "Green Gadget" attacks Yugi directly, but Yugi activates his face-down "Stronghold the Moving Fortress" to Special Summon the latter (0/2000) in Defense Position and use it to intercept the attack. The attack fails (Yugi 4000 → 3400).

Turn 5: Pharaoh Atem
Atem draws. He then activates "Tricky Spell 4" to Tribute "The Tricky" and Special Summon four "Tricky Tokens" (2000/1200 for each) in Defense Position (as Yugi controls four monsters). These Tokens cannot attack. Atem then Tributes three of his "Tricky Tokens" in order to Tribute Summon "Obelisk the Tormentor" (4000/4000) in Attack Position. "Obelisk the Tormentor" attacks and destroys Yugi's "Stronghold the Moving Fortress" (Yugi 2400 → 1400). Atem then Sets a card ("Summoning Clock"). 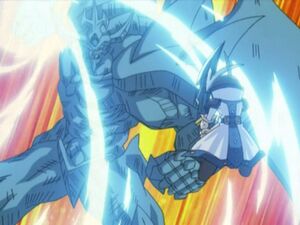 Due to the effect of "Turn Jump", the Turn Count moves forward by three. The effect of "Swords of Revealing Light" expires. At the same time the LV of "Silent Swordsman LV0" increases by three and it gains 1500 ATK ("Silent Swordsman LV0" → "Silent Swordsman LV3": 1000 → 2500/1000) and "Summoning Clock" gains three Turn Counters. Yugi activates the effect of "Ground Erosion" to send it to the Graveyard and negate the effects of "Obelisk the Tormentor" and as well as decrease its ATK by 500 for each Standby Phase that "Ground Erosion" has been face-up on the field ("Obelisk the Tormentor": 4000 → 2500/4000). "Turn Jump" also brings Atem back to the beginning of his Battle Phase, so he can choose whether to attack with Obelisk again or not. He chooses not to.

Atem then Tributes "Queen's Knight", "King's Knight", and "Jack's Knight" in order to Tribute Summon "The Winged Dragon of Ra" (?/?) in Attack Position ("Slifer the Sky Dragon": 3000 → 2000/3000 → 2000). (NOTE: In the anime, Atem also has to recite the Hieract chant to "unlock" Ra. It's chanted exactly as it's written on the card itself, so no-one but Atem himself and the Grave Keepers can understand it. The Japanese version has him chant in this idiom, so a transcription of it isn't possible.) Due to the effect of "The Winged Dragon of Ra", its ATK and DEF are equal to the sum of the respective ATK/DEF of the monsters Tributed to Summon it ("The Winged Dragon of Ra": ? → 5000/? → 4000).