Mokuba Kaiba: "How's Yugi gonna get out of this mess? There's no way!"
Seto Kaiba: "Yeah, that dork is definitely in over his head"
Solomon Muto: "I can tell you this much. Dueling the pharaoh is truly the ultimate test of Yugi's skills."
Marik Ishtar: "Incredible!"
Ishizu Ishtar: "Yes, since regaining his ancient memories, the Pharaoh is stronger than ever!"
Tea Gardner: "Joey, What's Yugi gonna do?"
Joey Wheeler: "I don't know Tea. Cause even though his trap card weakened Obelisk the Tormentor's Attack Strength, that big brute still has 2500 points. "
Mokuba Kaiba: "Don't forget about Slifer. One Lightning Blast and Yugi's monsters takes 2000 points of damage. "
Marik Ishtar: "And worst of all if the Pharaoh activates the Special Ability of the Winged Dragon of Ra, he can raise its attack points to almost 15000!! "
Seto Kaiba: "This isn't exactly brain surgery here folks: it's pretty obvious that only ONE of the two Yugi twins inherited the dueling skills so why even watch? Looks his little secret is out: Yugi can't duel his way out of a paper bag, so he got his look-a-like to duel for him." (starts leaving)
Joey Wheeler: "Get back here rich boy! This duel ain't over till it's over!"
Téa Gardner: "(...) Yeah how about showing a little respect?" 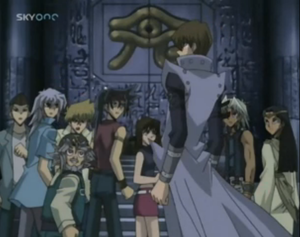 Kaiba's refusal about Yugi's Victory.
Seto Kaiba: "Do you losers honestly believe Yugi can still win?? (...) Then answer me this: what possible combination of cards would YOU use to defeat all three Egyptian Gods? (...) I rest my case. You're as clueless as Yugi is."
Joey Wheeler: "Ugh, look pal, I may not have the answer, but there is one. Come on Marik, you're the expert here: what's their weakness?"
Marik Ishtar: "Well INDIVIDUALLY they have drawbacks, but when all three are together, they're practically indestructible!"
Ishizu Ishtar: "Only FATE can decide the outcome of this ritual. If Yugi is unable to defeat his alter-ego, then the two are not yet meant to separate from one another. If this occurs, the Pharaoh will be trapped here for another 5,000 years."
Seto Kaiba: "(...) Come on Mokuba." (starts leaving again) "Hey Pharaoh, if you end up having to stick around for a few more years there IS a bright side: the two of us can finally have that rematch. And by the looks of this Duel, you're not going anywhere."
Yami Yugi: "That remains to be seen." 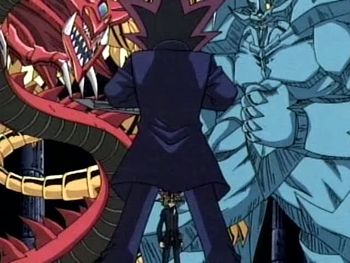 Yugi vs. Yami: The Final Duel is ON!

Yugi Muto: "Kaiba WAIT! What's the rush? (...) You OWE it to the Pharaoh to stay. You have a bond that goes back thousands of years and you should be here to say goodbye to him when he loses. (...) [I'm] More serious than I've ever been in my life. Those Egyptian Gods may be strong, but they're not undefeatable! And I'm gonna take them down ONE by ONE!"
Seto Kaiba: "(...) Come on! You mean to tell me you actually have a strategy in mind for defeating all three Egyptian God cards. (...) Fine, then THIS I gotta see. And when you fail miserably, I'll step in and show you what REAL dueling is all about."
Yugi Muto: (thinking) (...) It won't be easy, but I need to defeat all three Egyptian God cards. It's the only way for me to pass this test and free the Pharaoh by proving I'm ready to be on my own. Ever since our spirits joined together I've always let the Pharaoh take the lead during our duels, but every obstacle we faced together pushed me to try harder, and I always knew that some day I'd be good enough to walk by his side. I just hope that day is today.
Yami Yugi: "Yugi, I can see the uncertainty in your eyes and if you expect to win this duel you must first overcome your self-doubt. I believe THAT's why fate brought us together, so that you could learn to trust in yourself and be the duelist that you truly are inside, and so that I could learn from YOU. (...) I wouldn't be who I am without YOU, and I thought about everything that you taught me when I was building my deck."
Yugi Muto: "That's exactly what I did when I built mine! You taught me about bravery, and about having self-confidence even when all hope seems lost. And I thought about that with every card that I picked."
Yami Yugi: "And you taught me about friendship, and having compassion for others. In Duelist Kingdom you showed me there are some things more important than winning, like the safety of a friend. Each of us has given the other a gift."
Yugi Muto: "(...) Wow. So even though our minds have separated each of us has maintained the other one's strengths. And those strengths are represented in our Decks. So we're pretty evenly matched."
Yami Yugi: "That's right!"
Yugi Muto: (thinking) "That was just the kind of pep-talk I needed. I have to admit part of me was worried that the sides of this duel were uneven, but now I realized that even though the Pharaoh has ALL THREE Egyptian God cards, I have everything I need to STOP them. And that's exactly what I'm gonna do!" 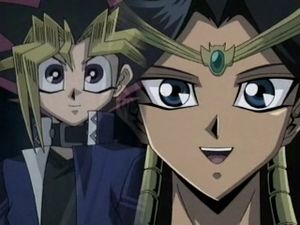 "Obelisk the Tormentor" attacks directly, but Yugi activates the effect of "Mirage Ruler" to send the latter to the Graveyard and return all of his monsters to the field that were destroyed during this turn's Battle Phase and increasing his Life Points by all the battle damage dealt to him. "Silent Swordsman LV4" (3500/1000) and "Valkyrion the Magna Warrior" (3500/3850) are returned to the field in Attack Position. Yugi then pays 1000 Life Points as per the last effect of "Mirage Ruler" (Yugi 900 → 3400 → 2400). A replay then occurs and Atem chooses not to attack with "Obelisk the Tormentor".

The effect of "Slifer the Sky Dragon" then activates, which will reduce the ATK of each monster Yugi just Summoned by 2000. Yugi then activates his face-down "Magnet Force", which redirects the effect of "Slifer" back at the three Egyptian God Cards ("Obelisk the Tormentor": 2500 → 500/4000) ("Slifer the Sky Dragon": 4000 → 2000/4000) ("The Winged Dragon of Ra": 5000 → 3000/4000). The effect of "Magnet Force" will remain active until the end of Yugi's turn. "Silent Swordsman LV5" attacks "Obelisk the Tormentor", but Pharaoh Atem activates his face-down "Mirror Force" to destroy all of Yugi's Attack Position monsters.