Mokuba Kaiba: "Impressive! Even though he lost his three best cards, the Pharaoh bounced right back! And now he's got the upper hand again!"
Seto Kaiba: "No, not quite."
Mokuba Kaiba: "What do you mean?"
Seto Kaiba: "Yugi may have fewer life points, but he managed to come up with an unprecedented strategy to defeat the Egyptian God Cards. I've never seen anything like that before. I can see now that I was wrong Mokuba, he is the King of Games."
Yugi Muto: "You mean that?"
Joey Wheeler: "Say what!? Am I going nuts, or did Kaiba just admit that he was wrong!?"

Yugi Muto: "Wait a sec! Are you telling me you sent Gaia to the Graveyard all the way back THEN? But why would you throw away such a powerful card so early in the Duel?"
Pharaoh Atem: "I was preparing for THIS. I have known from the very beginning that we would get to this point."

Yugi Muto: "WHAT? But how could you have predicted that?"
Pharaoh Atem: "It was simple. From the moment I chose the cards in my Deck I knew the course that this Duel would take. For although I held the three most powerful monsters in existence, I knew that I needed more. Yugi, what I'm saying is: I KNEW you would defeat the Egyptian Gods!"
Seto Kaiba: "That's impossible! There's no way he could have known how all this would go down."
Pharaoh Atem: "Yugi, destroying the three Egyptian Gods was merely the first step of this ritual. Now that they're gone the true test of our readiness to separate from one another can begin. So if you're ready to live on your own then PROVE it to me by winning this Duel! And now Gaia annihilate his Buster Blader with Spiral Lance Thust Attack.""

: Ishizu Ishtar: (thinking) "Yugi, there is only one soul with the power to save the Pharaoh, and that is you. Only by defeating him can you release his spirit to its final resting place. Please be strong!"

Pharaoh Atem: "It's my move, and now the card that I'm about to draw is the exact one that I need. And now the almighty 'Big Shield Gardna', come forth!"

Atem draws "Big Shield Gardna" and Summons it to the Field.

Joey Wheeler: "Alright, now I've seen it all."
Tristan Taylor: "That's nuts! How could he have known what card he was gonna draw?"
Bakura Ryou: "I suppose that's what they mean by 'luck of the draw'."
Marik Ishtar: "Not quite. That move had nothing to do with luck. Truth is, he KNEW exactly what card he was about to draw."
Téa Gardner: "What? But their Decks were shuffled right?"
Joey Wheeler: "Can he see the future? 'Cause if he can, I'd say that qualifies as an unfair advantage."
Ishizu Ishtar: "You're wrong. You see, the Pharaoh didn't PREDICT what his next card would be, his will power MADE it so. It appears the Pharaoh's determination was so strong he actually influenced fate with his own will."
Téa Gardner: "That's insane! Since when can fate be controlled?"
Joey Wheeler: "Look Téa, if I've learned anything from hanging out with Yugi it's that nothing's impossible."

Joey's Support of the Duel[edit]

Joey Wheeler: "Yugi's having the time of his life up there. And who could blame him? If he wins, that means he's ready to face the world on his own."

Tristan Taylor: "And the Pharaoh will finally be free."

Joey Wheeler: "What's up Téa?"
Téa Gardner: "I can't watch anymore. If the Pharaoh loses, this is the last time we'll ever see him. I don't know about you guys but I'm not ready to say goodbye yet. Please make them stop!"
Joey Wheeler: "Téa, this isn't easy for any of us but that Duel HAS to go on! Plus you know as well as I do, we couldn't stop this thing if we TRIED!"
Téa Gardner: "I guess so, but remind me why..."
Joey Wheeler: "Here's the deal: everything that's happened since those two met has been leading up to this. Just think about it: every single Duel that Yugi and the Pharaoh ever faced together was preparing them for this one! Every enemy they ever stared down, every strategy they ever planned, and every friend they ever saved helped shaped who they are today!! And now they need this test to see how far they've come. (...)Cause when they first met, these guys had a lot to learn and they needed each other to get by. But hopefully by now they're both ready to move on with their lives. Trust me Téa, this Duel is really all for the best and as tough as it may seem, we need to support those guys ALL the way."

Turn 11: Pharaoh Atem
Atem draws. He then activates "Polymerization" to fuse "Gazelle the King of Mythical Beasts" and "Berfomet" in his hand in order to Fusion Summon "Chimera the Flying Mythical Beast" in Attack Position. "Chimera" attacks & destroys Yugi's "Alpha".

Turn 13: Pharaoh Atem
Atem draws "Beast of Gilfer". He then Tributes "Berfomet" to Tribute Summon "Beast of Gilfer" (2200/2500) in Defense Position. Atem then Sets a card ("Book of Secret Arts").

Turn 15: Pharaoh Atem
Atem draws. He then Sets a card ("Dark Illusion"). Atem then activates "Awakening from Beyond" to add one card in his Graveyard to his hand and let Yugi draw two cards. Atem chooses the very first card he discarded during his first turn, which is revealed to be "Swift Gaia the Fierce Knight". Since "Swift Gaia" is the only card in Atem's hand, he Normal Summons it from his hand "Swift Gaia the Fierce Knight" (2300/2100) in Attack Position without Tributing. "Swift Gaia" attacks & destroys Yugi's "Buster Blader" (Yugi 2400 → 2200). Yugi then activates his face-down "Soul Rope" to pay 1000 Life Points (Yugi 2200 → 1200) and Special Summon "Witch of the Black Forest" (1100/1200) from his Deck in Defense Position.

Yugi draws "Pot of Greed" and subsequently activates it to draw two cards. 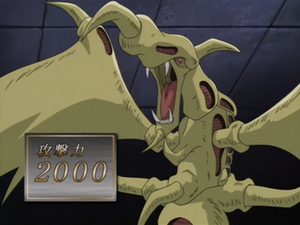 "Curse of Dragon" is Summoned.