Within Satellite, a location segregated from a luxurious utopia, New Domino City; lies Yusei Fudo, a young duelist and Duel Runner enthusiast who is plotting revenge against his rival and former friend, Jack Atlas, the current King of New Domino City in an attempt to reclaim his stolen Duel Runner and "Stardust Dragon" card. However, Yusei must first deal with Sector Security as they attempt to arrest his friend Rally Dawson for stealing a Duel Runner piece for Yusei's Duel Runner.

An announcer introduces the King of Turbo Duels to an excited crowd to which Jack Atlas then rides out onto the track, announcing his arrival to his fans. In the meantime, Yusei rides through the deserted and destroyed ruins of a subway.

Throughout New Domino City, the MC is announcing Jack's current Duel through various means to anxious audiences. Back at the track, both Jack and Hunter Pace begin the Duel by activating their "Speed World" Field Spell Cards, turning the stadium a bright lilac color upon activation, amazing the audience in the process. The MC explains the rules of Turbo Duels to the audience, informing them that due to "Speed World" being active, ordinary Spell Cards cannot be activated and that Duelists must rely on their Speed Counters. The Duel then begins with the MC announcing that Hunter takes the first move. As time passes, Hunter is shown to have an advantage with "Skull Flame". However Jack makes a quick comeback, easily Synchro Summoning his "Red Dragon Archfiend" and attacking "Skull Flame", winning Jack the Duel. In the meantime, Yusei's Duel Runner's engine has failed, causing it to break down. The MC announces Jack's victory to the audience, stating how he is still undefeated. Yusei then looks up through a crevasse in the road above at the moon.

Yusei pushes his Duel Runner back to his hideout to see his friends Nervin, Blitz and Tank are watching an interview with Jack after his current Duel on Yusei's television. The MC questions Jack on an instance in the duel where he struggled against Hunter's Trap Cards. In response, Jack snatches the microphone off of him and replies that if he went full-throttle at the beginning and defeated Hunter easily, the Duel would not have been entertaining for his audience, which received positive feedback from his fans who cheered. As his friends are fixated with the interview, Yusei revs his Duel Runner's engine, causing them to quickly turn the television off and talk to him. Tank apologizes for interrupting Yusei in his own home.

Yusei's friends inform him about Jack's Duel and how easily he toyed with Hunter. Yusei responds by saying he must have been a weak Duelist. They then question Yusei about his previous Duel Runner which Jack stole three years prior. Their conversation is swiftly interrupted by Rally, who excitedly runs down to the hideout, asking his friends for Yusei's whereabouts. He then runs to Yusei and hands him a brand new Duel Runner chip. Blitz questions Rally about where he found it and Rally responds that he found it among the garbage in Satellite, but is not believed. Yusei then programs the new chip into his Duel Runner and tests it out, amazing his friends with how much it powered up his Duel Runner.

Just as Rally tells Yusei to try it out, Sector Security appears above the hideout, telling Rally to come out as he stole the chip. They also explain that his marker allows them to track him where ever he goes. This causes Yusei's friends to begin arguing, but Yusei quickly intervenes, using his marker jammer to prevent Security from tracking Rally so they can escape whilst he draws them away on his Duel Runner. As Yusei exits, he is quickly followed by several Security vehicles. Whilst driving, Yusei is amazed by the speed output of his Duel Runner thanks to the new chip. He leads the Security officers to a desolate tunnel entrance. One officer, Tetsu Trudge steps out of his car and questions Yusei on who he is and where he got his Duel Runner from, to which Yusei proposes a Duel. Trudge questions Yusei on whether or not he even has cards to which Yusei shows him his Deck and slots it into his Duel Runner. Yusei states that if he loses, he will go with him willingly. The other officer protests, but Trudge tells him to be quiet and agrees to Yusei's offer. The other officer then tells his colleagues that it is no use and they leave. Yusei tells Trudge that even though he is an officer, he respects him as he is a Duelist to which Trudge calls Yusei "trash". They then both get onto their Duel Runners, prepare "Speed World" and drive off into the tunnel.

The duel begins with Trudge Normal Summoning "Assault Dog" and Setting one face-down card, ending his turn. Yusei then begins his move, with both of their Speed Counters increasing to one. He Summons "Speed Warrior" which dashes forward from Yusei's Duel Runner. Trudge mocks Yusei for Summoning a weak monster as it cannot defeat his "Assault Dog". However Yusei speeds up, with the effect of "Speed Warrior" activating, doubling its ATK to 1800. Trudge again insults Yusei by calling him "trash", which annoys him before attacking Trudge's "Assault Dog", inflicting 600 damage. Trudge Special Summons another "Assault Dog" from his Deck as one was destroyed by battle. Yusei Sets one card and ends. Trudge Releases his "Assault Dog" to Summon "Handcuffs Dragon". He attempts to attack Yusei's "Speed Warrior", but Yusei responds with "Scrap-Iron Scarecrow" in an attempt to negate the attack. Although Trudge is surprised, he was prepared and activates "Wiretap", negating the effect of "Scrap-Iron Scarecrow" and returning it to Yusei's Deck. He then continues his assault with "Handcuff's Dragon", which traps and destroys "Speed Warrior" within its cuffs. Trudge then turns around, and mocks Yusei's Deck whilst overtaking him. Yusei follows him, turning to defensive tactics, Summoning "Sonic Chick" in Defense Position and Setting 2 cards.

Trudge begins his turn by discarding "Tactical Espionage Expert", "Guard Dog" and another copy of "Assault Dog" to Special Summon his "Montage Dragon" whose ATK becomes 3000, shocking Yusei. Trudge orders "Handcuffs Dragon" to attack "Sonic Chick", crushing it with its cuffs. Trudge then skids across the track, ordering "Montage Dragon" to attack Yusei directly with "Power Collage", decreasing his LP to 100 and Speed Counters to 1. Trudge swerves around a corner, insulting Yusei and his Deck again. Yusei closes his eyes and believes that his Deck will help him make a comeback, drawing "Junk Synchron" in the process. He Summons "Junk Synchron" and Trudge is shocked to see that he owns a Tuner monster. Yusei then activates "Graceful Revival", resurrecting "Speed Warrior". He tunes his two monsters to Synchro Summon "Junk Warrior". Yusei then activates a Speed Spell Card, "Vision Wind", reviving "Speed Warrior" causing the ATK of "Junk Warrior" to increase to 3200. Trudge is twice more shocked to see someone from Satellite with a Synchro Monster and Speed Spell.

Yusei orders "Junk Warrior" to attack "Handcuffs Dragon", to which Trudge laughs as "Handcuffs Dragon" decreases its ATK to 1400 and prevents it from changing its battle position. Trudge tells Yusei that his victory is ensured as the two drive onto parallel walkways. However, Yusei responds with his "Equip Shot" Trap Card, attaching "Handcuffs Dragon" to "Montage Dragon" and forcing it and "Junk Warrior" to battle which results in Trudge losing. Trudge's Duel Runner stops, venting steam up into his face. He deprecates himself for losing to that "Filthy scum". Yusei then drives up to him and tells him "Any card, so long as it exists, has the potential to be useful. Someone who'd reject cards by calling them trash like you doesn't have the right to call himself a Duelist." He then drives off, leaving an angry Trudge behind who vows to crush Yusei. Yusei enters a desolate road overlooking a bright New Domino City in the distance. He gets off of his Duel Runner and stares at the city before saying "I'm coming for you Jack".

Turn 3: Trudge
During the Standby Phase, the effect of "Speed World" activates (Yusei: 1 → 2 SPC, Trudge: 1 → 2 SPC). Trudge Tributes "Assault Dog" in order to Tribute Summon "Handcuffs Dragon" (1800/1800) in Attack Position. "Handcuffs Dragon" attacks "Speed Warrior". As a monster Yusei controls was attacked, he activates his face-down "Scrap-Iron Scarecrow" to negate the attack. As Yusei activated a Trap, Trudge activates his face-down "Wiretap" to negate the activation of "Scrap-Iron Scarecrow" and shuffle that card into the Deck face-up. Until Yusei draws that card, the third effect of "Wiretap" will prevent him from activating another card with the same name. "Handcuffs Dragon" destroys "Speed Warrior" (Yusei: 4000 → 3100 LP).

Turn 5: Trudge
During the Standby Phase, the effect of "Speed World" activates (Yusei: 3 → 4 SPC, Trudge: 3 → 4 SPC). Trudge sends the Level 4 "Assault Dog", the Level 3 "Guard Dog", and the Level 3 "Tactical Espionage Expert" from his hand to the Graveyard in order to Special Summon "Montage Dragon" (?/0) in Attack Position through its own procedure. Due to the effect of "Montage Dragon", its ATK becomes equal to the combined Levels of the monsters sent to the Graveyard to Special Summon it times 300 ("Montage Dragon": ? → 3000 ATK). "Handcuffs Dragon" attacks and destroys "Sonic Chick". "Montage Dragon" attacks directly (Yusei: 3100 → 100 LP, Yusei: 4 → 1 SPC).

A cheerleader, who is identical to Blair (left)

This episode features an amount of cameos of characters similar to those from other series.

In the Japanese version, we see a list of Mukuro Enjo's opponents, all of whom have similar names to characters from the Yu-Gi-Oh! Duel Monsters anime.

A girl looking like Blair Flannigan appears as a cheerleader after Jack's Turbo Duel.

Ushio was a hall monitor, who bullied Joey and Tristan for Yugi and demanded payment. 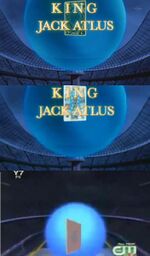 This is a listing of differences between different versions of this episode. Changes that are central to the entire series (such as different naming and card explanations) are not listed here, otherwise.