"The Take Back, Part 1", known as "The Special Pursuit Deck Returns: Regain the Bonds with a Friend" in the Japanese version, is the eleventh episode of the Yu-Gi-Oh! 5D's anime. It first aired in Japan on June 11, 2008.

In order to get back his Deck and Duel Runner, Yusei meets a man named Blister, but he is soon pursued by Trudge, who still wants to get his revenge on Yusei.

Yusei Fudo walks through the neon-lit Downtown District of New Domino City. Two men in suits follow and observe him. Yusei remains oblivious as he recalls what Armstrong said about the Securities having possession of his Deck and Duel Runner. He reaches a bar called Bootleg, remembering Tanner's advice about meeting Blister here, Yusei enters and the two suited men cautiously follow him. He sits at the counter before the bartender turns to serve him. The spikey haired bartender, with a criminal marking each of his eyes begins to mock and patronize Yusei. Yusei calmly asks for some milk. The bartender furiously grabs him by the collar asking if he's trying to yank his chain, but releases him as he sees Yusei's stalkers enter. (This was not included in the English version, due to possible contents of violence.) The barman gasps in shock after Yusei shows him the "Giant Ushi Oni" card. He then serves him the milk on the house and notices the two suited men. He nods to indicate to Yusei their presence and sends Yusei outside. The two people follow Yusei out as well.

After Yusei leaves, a rider leaps off a roof on a Duel Runner. He grabs Yusei, stuffs him on the Duel Runner and rides off. The stalkers pull out a tracking device, but Yusei's marker suddenly disappears from the device. The rider is shown flashing a device over Yusei's criminal mark, jamming its signal. He introduces himself as Blister. Helicopters now scout the area in search of Yusei.

At a seemingly abandoned office, Blister types something on a laptop. Yusei asks Blister what he is. Blister smirks and replies that he's not quite sure himself, but he'll get Yusei almost anything. He describes himself as a "Jack of all trades". Yusei remains silent while Blister continues to explain that he needn't worry about pay, because Tanner paid him before being sent to the center. He then asks Yusei what he can do for him. Yusei tells him that he plans to infiltrate the Security storage warehouse building. Blister turns to look at him, now with a shocked expression.

Yusei's fake "Taro Daimon" ID. (In the English dub, the name on this card was "Yusei Adams".) 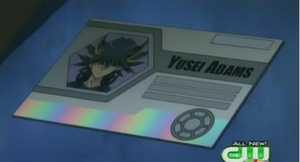 Yusei's fake ID in the dub.

Blister prepares a fake id for Yusei, which describes him as an electrician named Taro Daimon (In the English dub, it was changed to Yusei Adams). He also manages to pin point the location of Yusei's Duel Runner. While he's hacking, Yusei finds a picture of Blister with another duelist holding a trophy. Yusei notices the other duelist is holding a "Machina Sniper" card. A damaged "Machina Sniper" is also found, beneath the picture. Yusei asks Blister if he was a duelist. Blister gets mad and yells at Yusei not to be going around touching other people's stuff. Unremorsed by his scolding, Yusei holds up the picture and notes that Blister was a Tag Turbo Duelist. Blister sighs that he wasn't a pro, he only defeated duelists in the exhibition league. He then drops the subject and calls Yusei over to show his progress. Despite obtaining the password to the warehouse, Blister is still certain Yusei will end up back in the Facility. Either way he doesn't care.

Meanwhile Trudge, who is hiding outside, laughs and says that he won't allow Yusei to give him the slip. He recalls anointing himself to be the one to remove Yusei from New Domino, back at Security headquarters.

The picture of Aero and Blister.

The next day, Blister gives Yusei a bag of essentials telling him that the rest relies on his luck. As Yusei reaches for the bag, Blister demands to know why Yusei is embarking on this mission, knowing that he'll get caught. Yusei replies that the bonds of his friends are there and that he's just taking back what was stolen from him. Blister jeers at the idea of doing this for friends. Yusei then cleverly glances at the picture he was looking at earlier. Blister's tone changes as he says that he understands. He once had a friend, he tells Yusei, but all he left was an unrealistic reality of living dead with profound despair. Although he hasn't changed his mind on how he remarked on what Yusei said, and tells him that bonds of friendship is just a fantasy. You eventually only try think of yourself, just like him. He then recalls an incident where his friend Aero got badly injured in a Riding Duel accident. Fortunately Aero lived, but will never ride a Duel Runner again. Blister splutters and says that he's already as good as dead. He picks up the "Machina Sniper" card, saying that it is what their bond ended up as. He was sent it after the accident, but feels Aero did it in spite of him for walking out himself. He angrily proclaims that risking your life for a friend is impossible when you get down to it. So you're as well off not making friends. Yusei remains silent and leaves to proceed with his mission.

After Yusei leaves Blister repeats to himself, "What a load of nonsense." He glares out the window at Yusei, who is now being silently followed by Trudge.

Yusei disguised with a hat enters a building. After the building closes and the lights go out, Yusei emerges from the male toilets. He goes to the top floor, where Blister located his Duel Runner. Using the "Yusei Adams" ID card, Yusei gains access to the storage room, where the Duel Runner is detained. Using a kind of tracker, he pinpoints its location, but is suddenly dazzled by an barrage of spotlights.

Trudge, who is standing up on the platform next to the lights with another Security, says he knew, with Yusei being Satellite scum, he would try something, but he can hardly believe he went as far as sneaking into the warehouse. Yusei shouts that this belongs to him and his friends. Trudge disagrees saying it's property of New Domino City, as is scum from Satellite. Trudge announces that he'll send him back to the Facility and sets a group of Securities on Yusei.

Yusei leaps inside the crate holding his Duel Runner. Inside Yusei gets on his Duel Runner at 7:09 pm and smashes through the crate while riding it. He races on narrowly making it through a closing door, but is followed by Trudge on his own Duel Runner. Trudge activates his "Speed World" at 7:11 pm, causing a Turbo Duel to start.

As they duel Yusei tries to find a way of escaping the building, but other Security members monitor the Duel and close any doors Yusei tries to escape through. Escaping seems hopeless for Yusei, but Blister then contacts him telling him to push on. Yusei speeds forward straight in the direction of a door. 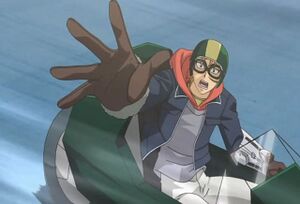 Blister rides a Duel Runner with his tag partner, Aero, in the sidecar. The Duel Runner in front of them spun out of control and fell over. Blister hit into it causing him and Aero to get knocked off track. The duo sped towards a factory. The joint holding the side car on now damaged from the crash, broke, causing the car to move away from the bike. Blister tried to grab Aero's hand, but spun away after seeing how close they were to the factory. Aero, left with his arm outstretched calling for Blister continued towards to the factory. Blister stops the Duel Runner and falls off, while witnessing the explosion as Aero crashed into the factory.

Yusei then tunes "Quillbolt Hedgehog" with "Junk Synchron" to Synchro Summon "Junk Warrior" (2300/1300) in Attack Position. However, Trudge activates his face-down "Discord Counter" to return "Junk Warrior" to Yusei's Extra Deck and Special Summon "Junk Synchron" (1300/500) and "Quillbolt Hedgehog" (800/800) from Yusei's Graveyard to his side of the field in Defense Position as well as forbid Yusei from Summoning any monsters until the End Phase of his next turn.