Due to Rex Goodwin's special permission, a consolation game is to be held. Luna is called to participate. Leo is unable to substitute and Luna reluctantly comes forward. Her opponent, Professor Frank, has a trip to the Duel Monsters Spirit World planned.

Lazar talks with Frank in a poorly lit chamber. Light peers in through a bared window, leaving most of Frank's face hidden in shadow. Lazar apologizes for having Frank lose his Duel on purpose, due to the turn of events. There is a certain duelist they would appreciate him saving his abilities for.

The crowd watch Yusei, who has just won his Turbo Duel against Hunter Pace. Leo boasts to Dexter about Yusei's skills, until he is shot down by Luna, who reminds him how he lost in the first round. Leo buries his shame, acting innocent, as he says Luna is the one who lost. As the two bicker the MC announces that Goodwin has made a proposition. All players who lost in the first round are to participate in a consolation game. Leo gets excited ready to play as Luna again. As Leo looks though his Deck, considering reorganizing it, he asks Luna if he can borrow her clothes again. Another disagreement between the duo is cut off by the MC as he prepares to call out the participants in the next Duel. Luna's name is called out, Leo stands up, without having made any change in outfit, but the spotlight drops on Luna.

In a competitor's room Greiger notes that that must be the real Luna, the imposter, he dueled, showed some fine dueling. He wonders how the real thing will fare. Luna gets uneasy, considering what to do. She doesn't want to duel, considering she gets really tired from dueling. The crowds chants for Luna begin to heat up. Leo sits back disappointed, that after getting a chance to duel Yusei, he's sorry to see it has to end like this. Luna reluctantly steps up and gathers her Duel Disk under her arms.

Luna walks down to the arena.

As Luna leaves her companions, Yanagi asks Leo about her Deck. Leo tells him how Luna had built a "Spirit Deck", since she was able to communicate with Duel Spirits, who told her to make a Spirit Deck. Slightly puzzled, Tanner asks that that be ran by him again. Leo continues as he says that she gets tired after hearing the Spirit's voices, explaining why she gets tired after a Duel. Timidly Luna makes her way down a flight of steps to the arena with the spotlight and the audience's attention following her.

Luna falls into a coma.

Jack having just learned Luna is a Signer talks with Rex Goodwin, who explains that the consolation game, is to affirm that she is a Signer. A click of his finger summons a holographic screen of Zigzix. Whilst twirling, Zigzix takes lapses to explain that they need a small reading on his D-Sensor to prove she is a Signer. A wave of Goodwin's hand dismisses the projection. He then pulls another holographic screen of Luna. He touches some buttons on the screen, as he tells how they entered her in the tournament upon learning of an incident from eight years ago. A swish of his hand pushes the screen over to Jack and causes a number more screens of Luna eight years ago to crop up around it. He informs Jack, that eight years ago, Luna had fallen into a coma, while dueling. Pointing his finger in front of him calls up another projection of Leo in the audience. Leo had always been by her side, calling her name. One month later she recovered, he explains. Lazar interrupts as Jack asks how this relates to Signers, telling him that after the coma, she claimed to have been in the World of Duel Monster Spirits for that time. Lazar works the magic with the projections as he brings up one of the Nazca Lines, while talking about theories of the origins of Duel Monsters. Goodwin continues that after the eight years, neither of the twins have any recollection of those events. He feels that taking her back to that world is in order, as they might learn her true power.

The MC calls out the prodigy Luna. Her Duel Disk fits on neatly, thanks to Yusei's adjustments. Frank is introduced. He walks out and bows to Luna, saying he is glad to meet her acquaintance. Uneasily, Luna lets out a "same". He asks how about finding the real her, hidden within the inner depths of her consciousness. Luna then hears another voice, make a squeaking whisper. She responds to it mentally, "Yeah, you have the same uneasy feeling".

Hoping to end the Duel as soon as possible, she Summons her first Spirit, "Sunny Pixie". Frank brings out "Symmetry Rorschach". He uses the monster to conduct the Rorschach test. He asks her what the monster looks like to her. Luna is bewildered by the circumstances, but in the crowd, Yanagi and Dexter call out that its "Crystal Skull" and a butterfly respectively, but Leo is worried about what Luna's opponent is up to. Reluctantly Luna says "A Spirit?", as the monster then takes on the form of her monster. The monster then grows a demonic head and attacks her "Sunny Pixie". Luna yells as her monster is destroyed by it. Frank's voice remains calm and open, says that the test has revealed that she is afraid. He then asks if she is afraid of spirits and fairies. Luna attempts to begin to explain that that's not how it is, but is cut off by Frank. He says it is fine, he shall clear any worries she has. To do so she must courageously enter the world of the Duel Monster Spirits. He is aware that she can talk to spirits, so deduces that her being in a world of spirits isn't strange at all. Luna wonders how such a world can exist.

Frank then uses the effect of "Symmetry Rorschach", revealing the top card of her Deck. Luna is slightly relieved to see "Kuribon". Frank, calm as always, asks her if she is able to hear its voice. Knowing it to be true, Luna begins to get more uneasy, she then turns to face Leo in the crowd, right before a flashback of her past. She hears Leo calling her name, but is unsure if that just happened or if she had imagined it. Leo begins to feel Luna's fear.

Frank continues the Duel, Sets two cards and passes to Luna. Luna brings out "Kuribon" to her aid. But Frank plays "Light to the Depths", hypnotizing her as he does so. The sixth card "Ancient Forest" is activated. After explaining its effect, Frank interprets it as a world that doesn't tolerate conflict.

Luna awakens in the World of Duel Monster Spirits. Despite the tranquility of the place, she still feels afraid. Back in reality, Luna remains in a trance. Frank plays "Gestalt Trap" on "Kuribon". In the Spirit world, the shackle from the Trap appears and wraps itself around "Kuribon". Followed by "Immortal Homeostasis", also targeting "Kuribon". Next Frank Tributes "Symmetry Rorschach" for "Ido the Supreme Magical Force". In the Spirit World, Luna attempts to attend to "Kuribon", but is then confronted by Frank's monster. 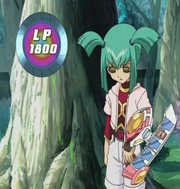 The Tranced Luna in reality.

In reality, Luna remains motionless. The crowd begin to yell at her, that she's going to lose, if she continues like this. Dexter notices Leo is experiencing the same loss in concentration.

"Kuribon" takes "Ido the Supreme Magical Force's", blow but survives due to the effect of "Immortal Homeostasis". Despite its survival Frank explains that "Kuribon" experiences a world of pain, due to its immortality. He then reminds Luna of her true mission. Remembering conflict isn't tolerated in the forest, Luna watches Ido get destroyed. Her smile of relief is cut short as it revives itself.

In reality, the tranced Luna draws and takes damage from "Immortal Homeostasis" before Summoning "Sunlight Unicorn" and equipping it with "Horn of the Unicorn". (The English anime mistakenly has 8 Level Stars on the "Sunlight Unicorn" card.) 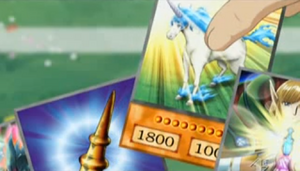 In the dub, "Sunlight Unicorn" is incorrectly shown as a Level 8 monster; it is actually Level 4.

In the Spirit World, the unicorn appears ready to assist Luna. A voice than begins calling her name. She looks around and the voice asks her, if she came to fulfill her promise to protect the Duel Monster Spirit World from the evil ones.

Turn 3: Luna
Luna draws "Kuribon" and subsequently Normal Summons it (300/200) in Attack Position. Frank then activates his face-down "Light to the Depths" to send the top five cards of Luna's Deck to the Graveyard (among them are "Swords of Revealing Light" and "Fairy King Truesdale"). The next top card after those cards, "Ancient Forest", is then added to Luna's hand. If Luna does not activate the card that was just added to her hand by the end of this turn, she will take 2000 damage.

Luna activates "Ancient Forest". Now, monsters cannot be summoned in Defense Position or be changed into Defense Position and if a monster attacks, it will be destroyed at the end of that turn's Battle Phase.