"Second Round Showdown, Part 1", known as "Uncompromisable Feelings: My Mission is with my Hometown" in the Japanese version, is the twentieth episode of the Yu-Gi-Oh! 5D's anime. It first aired in Japan on August 13, 2008 and in the US on January 24, 2009.

The first day of the Fortune Cup comes to a close. Before their Duel begins tomorrow, Yusei and Greiger have a friendly talk during the night.

Leo is furious with Luna for forcing the game into a tie. Luna says that it's better than a loss and she wasn't going to win anyway at that rate. Luna notes that Leo seems to have no memory of talking to her in the Duel Monster Spirits World. She begins to wonder what Frank meant by Signer. Looking down, she fingers her sleeve, considering checking her arm, where the dragon birthmark was showing. Yanagi asks if she's okay, while the others point out that she spaced out for a while during the Duel. She assures them she's fine.

Yusei tells the twins that he'll take them home today, shortly before the MC announces the end of day 1 and draws up the standings for the semi-finals. Leo's eyes fall on Yusei's next opponent, Greiger, as he recalls his Duel with Greiger in the first round. Tanner says that Greiger shall be a formidable opponent. Yusei agrees. Since it's a Turbo Duel, Tanner is interested in what kind of Duel Runner Greiger has. This catches Leo's attention. Leo figures knowing about Greiger's Duel Runner in advance might give Yusei the upper hand. Leo tells the others to go without him, that he's just remembered he has to do something.

Blister and a few others walk off a cargo ship into a harbor in Satellite. A bald man walking off the ship hands a notepad to a man at the harbor, who checks it and tells them that they're loading recycling material tonight and asks if they can make it in time for departure. The bald man turns to the others coming off the ship and tells them to do what they like until then. A driver starts calling people over to his van to come this way to the Satellite black market. Blister joins the driver, who is familiar with him and sits in the back.

Jack punches at Greiger. This scene is removed in the dub. 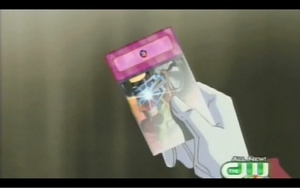 Lazar giving a card to Greiger.

Lazar hands Greiger a card, telling him they've readied the card he spoke of. Greiger slides it into the Deck box strapped to his leg. Lazar mentions that it is a powerful card. Greiger has a chance of beating Yusei, if he masters that card, Lazar says. Goodwin explains that they are counting on him to awaken Yusei's qualifications as Signer. Greiger says that he understands and brings up the topic of when Goodwin's goal is reached. Goodwin continues his sentence that then KaibaCorp will provide the aid reconstruct Greiger's village. He asks Greiger how long he has been away from his village. Greiger promptly replies, 1 year and 116 days. In order to return ASAP, he plans to carry out his mission without fail.

Greiger leaves the room. He is confronted by Jack in the hallway. Jack tells Greiger that he is in the way. Greiger turns to the side, sarcastically saying "Pardon my manners... King". Jack abruptly says that he meant, him as a whole is in the way. Jack continues that Yusei will advance in the tournament either way. Only he, himself, is capable of defeating Yusei. Greiger facing him is just a waste of time. Greiger tells Jack that he is a pathetic king. Swiftly Jack unsuccessfully punches at Greiger without any consideration. Greiger simply blocks the blow catching Jack's fist. Greiger continues that Jack hasn't even noticed his own mission. Jack asks "What mission?", but Greiger simply replies that he also has a mission, one which Jack cannot stop.

The face of Greiger's Duel Runner, that scares Leo.

Leo sneaks around a storage area. He comes to Greiger's garage and climbs in through the window. After turning on his flashlight, he is frightened upon seeing what he thinks is a ghost. His screams set off an alarm.

Meanwhile Yusei is at Tops in the twin's apartment. He sits to dinner with Luna, who notes that Leo is late. Yusei gets up to search for Leo. Luna says that she's coming too. Yusei refuses, telling her that she needs rest. Luna assures him that she's fine, but she'll feel worse if she stays.

Much later Greiger arrives at his garage, finding Leo asleep.

Blister finds the place in a mess.

The driver advises Blister to be on the look out for Securities as he leaves. Using an electronic tracer he finds his way to Yusei's friend's base. He calls out for Rally, Nervin, Blitz and Tank, but the place is in a mess and no one was there.

He contacts Yusei via the monitor on Yusei's Duel Runner. He informs him that he didn't find his friends, but he broke into their network and found no record of them being caught by Security, but he'll keep up his search.

Greiger emerges from an alley, with Leo over his shoulder. He says he'll explain later, but not to worry Leo is not injured. Together they all go back to Tops.

After Luna falls asleep, Yusei and Greiger step outside. Greiger explains that his security system must have went off, locking Leo inside. He deduces that Leo had come to find his Duel Runner. He lets Yusei know he is aware, Leo did not act under his instructions. Greiger explains that he would not blame Leo. He knows how fond he is of Yusei. Greiger relates, explaining how Leo and Luna remind him of his brother and sister back home.

Greiger stares into the night sky, noting the lack of a single star. He turns to Yusei and asks him what he is fighting. Yusei prompty replies proudly that he is fighting for his hometown. Greiger informs him that they are both fighting for the same reason. Greiger begin to tell his story. He is from the other side of the world. His tribe descends from those who served the People of the Stars. Yusei points out that he must know of the Crimson Dragon. Greiger continues that the Crimson Dragon is attempting to resurface and Goodwin plans using its power to lead the world in the right direction. Yusei asks if he believes that. Greiger reminds Yusei that they are both from poor towns and says that Goodwin promised to help his town if he co-operated. Yusei tries to convince him not to trust Goodwin. Slightly upset, Greiger says that they are cut from the same cloth, but they are in different positions. Neither of them can compromise their beliefs. Yusei's eyes tighten, before he announces that their Duel shall stand to that. Greiger leaves saying he is glad to have learned Yusei is a proud duelist, but vows that he will win tomorrow.

The MC calls out the standings for today's first Duel. Yanagi looks around their seats and asks where Leo is. Luna informs him that Leo had something to tell Yusei.

As Yusei prepares for the Duel, Leo comes over to him, apologizing for last night. Yusei understands, but orders Leo to apologize to Greiger after the Duel, regardless of whether he wins or loses. Leo promises, before Yusei leaves as he races out for his Turbo Duel, introduced as "the Shooting Star of Satellite",. The crowd's attitude to Yusei has now melted away as he finally receives cheers from them.

Next Greiger, "the Black Storm," speeds out of his tunnel, leaving the audience in awe at the size of his Duel Runner. Jack sits unstimulated by the Runner, but remarking on having a look at Greiger's "mission".

The players line up. Greiger vows that he will win, but changes his words and announces that he must win! Greiger quickly Summons his ace monster "Flying Fortress SKY FIRE". Stating to have Yusei frozen in place, he will win and carry out his mission.

Yusei enters his Battle Phase and activates the effect of "Speed Warrior" to double its ATK ("Speed Warrior": 900/400 → 1800/400). "Speed Warrior" attacks "Spell Reactor・RE", but Greiger activates his face-down "Fake Explosion" to prevent his monster from being destroyed by battle (Greiger 4000 → 3400).

Greiger then activates the second effect of "Fake Explosion" to Special Summon "Summon Reactor・SK" (2000/1400) in Attack Position. Greiger then activates his face-down "Delta Reactor" to send "Summon Reactor・SK", "Trap Reactor・Y FI", and "Spell Reactor・RE" to the Graveyard and Special Summon "Flying Fortress SKY FIRE" (3000/2500) in Attack Position, ignoring the Summoning conditions. At the end of the Battle Phase, the effect of "Speed Warrior" expires ("Speed Warrior": 1800 → 900/400).