"The Fortune Cup Finale, Part 2", known as "Destiny of Signers! The Future Guided by the Crimson Dragon" in the Japanese version is the twenty-sixth episode of the Yu-Gi-Oh! 5D's anime. It first aired in Japan on September 24, 2008 and in the US on March 7, 2009.

The Duel between Yusei Fudo and Jack Atlas heats up. Even though the Signers are transported into the past that is related to the Crimson Dragon, Jack is still determined to win the Duel.

Awakening of the Crimson Dragon[edit]

As Yusei and Jack continue their Duel, the sky fills with dark clouds. Yanagi wonders if this could be a result of two Signers dueling. Tanner tells him to get real and concentrate on cheering for Yusei.

In Goodwin's box room, Lazar asks if there's any significance in continuing the tournament, now that they have confirmed the identity of the four Signers they were searching for and considering the concerns Trudge had for the safety of the citizens. Goodwin asks Lazar, does he not want to see the power of the Crimson Dragon. But without having all five Signers that's not possible, Lazar thinks, before suddenly turning to Goodwin and stating with shock that Goodwin is implying the fifth Signer is in the premises. He gets excited and asks "Does this mean the Crimson Dragon birthmark is complete?" Goodwin declares that they will see something interesting once the Duel is over.

As the two dragons fight, red streams of light crashes from the sky and take of the form of the Crimson Dragon. The majority of the spectators are suprised and wonder where it came from. Yanagi, Mina and Sayer display mixed reactions of concern.

The Ener-D lab goes out of control.

Goodwin contacts Zigzix, who is greatly excited about the surge in Ener-D. Goodwin tells him to shut down the Ener-D machine. Zigzix is upset by this and asks why; Ener-D has never been this operational before. Goodwin reminds him that its an order and if he values his life, he should comply and asks if he wishes to vanish, like Greiger's hometown. The high levels of Ener-D become more the technology at the station can handle. Thinking about what Goodwin said, Zigzix now begins to worry and orders the personal to quickly shut down Momentum.

The dragon head birthmark in the preservation tank.

Yusei expresses his concern about the Duel; If they continue, there's no telling what could happen. Jack replies asking if Yusei is scared and tells him that someone who fears what is laid before them is not fit to be called a duelist; If all creation scatters to pieces, Jack will continue the Duel.

With all conditions in order, Goodwin decides its time to bring the divided power of the Signers together, which will bring the Duel into another dimension. He reaches into a preservation tank, containing an arm with the dragon head birthmark. In the English dub, he says that he is the fifth signer while doing this. The Crimson Dragon soars over the stadium, spreading its wings out fully.

Visions of the past and future[edit]

People of the stars.

Yusei and Jack find themselves riding on a stream of light in a strange starlit setting. The Signers, Akiza and Luna follow behind them in two red bubbles. They approach the Sky Temple, where an abundance of people bow before five others at the temple. The stream of light directs them upwards and over the temple. Jack notes that these must be the People of the Stars. Yusei looks closely at the five and sees they all have dragon birthmarks. Jack wonders if they've been transported to another time.

As they continue to travel along the stream, they see New Domino City and Satellite. A Dark Signer spider mark smashes through a number of buildings in Satellite, drawing the shape of a large spider. Jack guesses this is the future. Even while witnessing this mass destruction, Jack insists they continue the Duel. He claims since the Duel brought them there, ending it should bring them back to reality.

Yusei continues and inflicts damage to Jack's LP, which causes Jack to suffer actual pain. On Jack's turn he damages Yusei. Akiza and Luna notice Yusei feels real pain from that attack. Akiza wonders if this is the same as her power.

Jack plays one his famed cards "Speed Spell - End of the Storm", forcing Yusei to Tribute "Stardust Dragon" to negate it or he'd lose the Duel. This allowed Jack to play "Sneak Exploder" which would defeat Yusei next turn. But Yusei revived "Stardust Dragon" with its effect and played "Meteor Stream" which would defeat Jack if it resolves. Recognizing this as the card responsible for Jack's defeat last time they dueled, Jack explains that his last defeat was an illusion to dramatize the fact that he is the true King. He then Chains "Crimson Fire", but Yusei chains "Shining Silver Force", negating the damage and destroying Jack's Spell and Trap Cards, including "Sneak Exploder". This allowed Yusei to begin his turn without taking the damage from "Sneak Exploder". 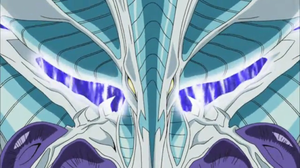 The players then return to reality, where Jack's Duel Runner begins to spin out of control tossing him off. "Stardust Dragon" and "Red Dragon Archfiend" are still present, but petrified. Their holograms however soon fizzle a bit before disappearing away.

Apart from Luna, none of the spectators to know how the Duel went. Leo then points at the scoreboard, and Tanner, Yanagi, Leo and Dexter see Jack's LP are at 0. Luna calmly states Yusei won the Duel and that means he is the champion now. Up at the tower, Goodwin and Lazar have seen the end result of the Duel too and while Goodwin is unfazed at the end result, Lazar is completely shocked that Jack lost the Duel.

Yusei rushes over to Jack to see if he is alright. Jack is ashamed that he as King, lost again. Yusei explains that Jack lost by giving into his pride of trying to be King.

The MC is unsure of the situation, but Goodwin appears on a monitor next to him "What's the matter? The match is over." The MC calls out that Yusei is the winner and they have just witnessed the birth of a new King, Yusei Fudo.

"Stardust Dragon" attacks "Red Dragon Archfiend", but Jack activates his face-down "Tuner's Mind" to return "Red Dragon Archfiend" to his Extra Deck and revive "Twin-Sword Marauder" (1600/1000) and "Dark Tinker" (1000/1300) in Defense Position. A replay occurs and Yusei uses "Stardust Dragon" to attack "Twin-Sword Marauder", but due to "Tuner's Mind", the attack is redirected to "Dark Tinker", destroying it instead. The effect of "Synchro Blast" then activates (Jack 2800 → 2300). Jack draws one card as per the effect of "Dark Tinker".

Jack activates "Speed Spell - Overboost" to increase his Speed Counters by four (Jack's SPC: 7 → 11). Jack then activates "Speed Spell - End of the Storm" to destroy all monsters on the field and inflict 300 damage to each player for each of their destroyed monsters, but Yusei Tributes "Stardust Dragon" to negate and destroy "Speed Spell - End of the Storm". Jack activates his face-down "Sneak Exploder". During Yusei's next Standby Phase, Jack can send "Sneak Exploder" to the Graveyard and inflict 500 damage to Yusei for every monster Jack controls.

Mistakes in the English version[edit]