"Surely You Jest, Part 2" known as "Stir Up the Divine Winds! Black Feather Arms Wing" in the Japanese version, is the forty-fourth episode of the Yu-Gi-Oh! 5D's anime. It first aired in Japan on February 4, 2009 and in the United States on August 1, 2009.

Crow and Lazar continue their Duel, with Crow still thinking Lazar is a Dark Signer, while the Signers prepare to travel to Satellite to face the Dark Signers. 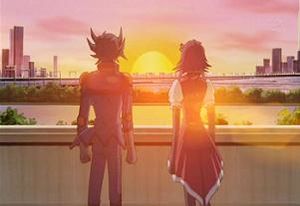 In New Domino, Akiza and Yusei stare from a balcony into the sunset. Akiza wonders if sunsets were this vivid five thousand years ago. Yusei replies that it probably was but it is the future that is uncertain and they must protect this world. Akiza smiles and agrees. Elsewhere Leo and Luna make the most of the sunset, while staring at its beauty.

Up on the roof Jack lies flat on the roof with a panoramic view of the red sky. He fixates his attention on Carly's glasses. Mina rushes up to Jack to report a problem, but pauses after spotting Carly's glasses. Jack interrupts, as he reminds her he asked what the problem was. Mina clicks back to reality and tells him that something bad has happened in Satellite.

Meanwhile in Satellite's B.A.D. Lazar and Crow continue their Duel. Lazar jokes that he will have Crow dancing in the palm of his hand and Special Summons "Jester Confit" with its effect. Crow is bewildered as he tries to make sense of the move. Lazar Summoned another monster with 0 ATK, which caused his other monster, the ATK of "Jester Lord" to drop back to 0. All he can guess is Lazar is planning another "wacky combo". Lazar Sets 1 card in his Spell & Trap Card Zone. Crow asks Lazar what he's scheming and calls him crafty. Lazar replies that the same goes for him, before sliding out the projection of Crow's details again, thinking to himself that he shall have a clear view of what Crow is thinking.

Crow begins his turn, but Lazar activates his face-down, during Crow's Standby Phase. Lazar's card is "Late Penalty", another Continuous Trap. It forces Crow to skip his Battle Phase, if he has no monsters during the Standby Phase of the same turn. Crow swears at Lazar and accusing him of playing dirty for stopping his attacks 2 turns in a row. Lazar laughs and asks what dance Crow will be performing.

While Crow thinks about his move, Lazar glances at the projection of Crow's details and looks up information of a card in Crow's Deck, "Fake Feather" and thinks it should prove problematic should Crow be able to use it, selecting Lazar's Trap, "Imperial Manners".

Although Crow cannot attack, he declares that not Summoning a monster, would go against his Duelist pride. He Summons "Blackwing - Sirocco the Dawn" Lazar worries that with a "Blackwing" monster, he could play "Fake Feather". Crow Sets a card in the Spell & Trap Card Zone. Lazar expects this to be the end of Crow's turn, but Crow plays "Reload" shuffling the last card is hand back into his Deck and drawing a new one. Lazar remarks that such a tactless gamble would make Crow unfit for a clown. Crow Sets the card he drew into his Spell & Trap Card Zone and invites Lazar to bring it on. He announces that he'll dance naked if Lazar can predict this move.

Crow ends his turn and laughs away. Lazar smiles, as he is certain Crow is after getting "Fake Feather". He activates the effect of "Jester Confit", returning it and "Blackwing - Sirocco the Dawn" to both players' hands. Both monsters burst into smoke, which upsets Crow, who whines that it took a lot of time to Summon "Sirocco of Dawn". He then remembers, now that "Jester Lord" is the only monster on the field again its ATK will rise. Since there are 5 in the Spell and Trap Cards on the field, "Jester Lord", now juggles 5 fireballs and stands at 5000 ATK.

While Crow cries about Lazar got him, Lazar begins his turn. Lazar tells Crow that he is aware of his act and he won't be deceived into dropping his guard and attacking, because of how Crow is displaying his frustration. Lazar then thinks; If "Fake Feather" was the first card Crow Set, he would have kept "Sirocco" in his hand. So Lazar thinks that that card isn't "Fake Feather", so it must be the other. He plays "Distrain Card" preventing the second card Crow played from being activated. Next he attacks with "Jester Lord", but Crow flips the first card, which to Lazar's utter surprise is "Fake Feather". Crow uses it to take on the effect of "Imperial Manners" destroying "Jester Lord".

Crow tells Lazar that he had been onto his plan, since he Summoned "Jester Confit" and remained 1 step ahead. Lazar is intrigued that duelists such as Crow exists among Satellite rats. Rat or Crow, Crow say he more brains than a pet from the city. Lazar finds it a rare feat that someone can boast about being a rat.

Lazar continues the Duel and Crow takes 800 damage from the other effect of "Distrain Card". Lazar Special Summons "Jester Confit" once more and equips it with "Spirit Burner". Lazar ends his turn and describes how his lockdown combo has Crow struggling.

Crow laughs and says that Lazar was right, the last card he set was his key to victory. He begins his turn, draws "Blackwing - Blizzard the Far North" and activates his face-down, "Trap Stun". "Trap Stun" negates the effects of all other Trap Cards until the end of the turn, freeing Crow of all their restraints. He Summons "Blackwing - Blizzard the Far North" and uses, which sits on his Duel Disk. It pecks away at his Graveyard, as he uses its effect to revive "Blackwing - Bora the Spear". Next he tunes both monsters and chants "Pitch-dark power, lodge in its great wings and stir up divine winds. Synchro Summon! Gust fiercely, Black Feather - Arms Wing!", as he Synchro Summons "Blackwing Armed Wing". "Armed Wing" attacks "Jester Confit". Since "Confit" is in Defense Position, "Arms Wing" gains 500 ATK and inflicts Piercing damage. "Arms Wing" destroys "Confit" and drops Lazar's Life Points to 1200. 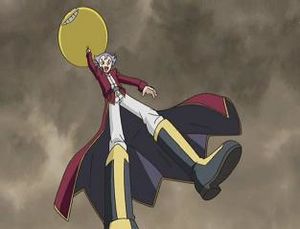 Lazar manages to calm down and finds the Duel interesting. He prepares for the part of the Duel that will dictate which of them is the true clown. The room begins to shake as an earthquake hits. Lazar, who has some idea of what's going on, puts his cards in his pocket, drops his Duel Disk and runs. he tells Crow they must leave as soon as possible. Crow is disgusted that he's abandoning his life as a duelist to run away and unstraps the Duel Disk cuff and fires it at Lazar. Lazar says his real life is more important right now and ejects a balloon from his sleeve. The balloon inflates and lifts him away. He advises Crow to run if he values his life, although it may be too late. 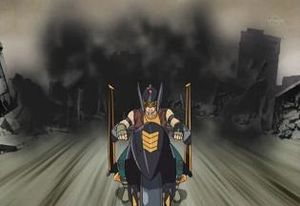 A black mist starts to fill up the premises. Crow dashes to the Blackbird and speeds ahead, keeping a distance between himself and the mist. Elsewhere, other Satellite residents, become engulfed by it and disappear. The mist catches up to Crow and leaves behind the Blackbird, amongst some other Satellite folk's cards.

Back in New Domino, Mina shows Jack, Yusei, Akiza, Luna and Leo footage of Satellite after the smoke filled the area. She tells them some sort of abnormality occurred in the deepest part of Satellite, they are currently unable to contact Sector Security in Satellite and the footage they have may not hold very long. Straight away, all screens in front of them lose their signals. Jack refuses to do nothing and declares that they are flying to Satellite right away. Yusei worries about his friends in Satellite, as Mina prepares to execute Jack's plan. 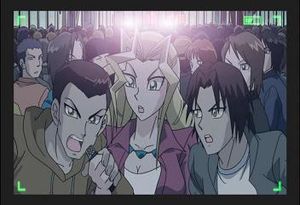 Civilians have gathered outside Security's headquarters' to demand answers concerning the appearance of the flaming lines in the city that that caused hundreds of people to disappear. A member of Security unsuccessfully tries to calm them down. Angela tries reporting live on the scene, but civilians flock around the camera demanding Goodwin to give them answers.

Angela manages to crawl free form the people crowding her camera. She is contacted by Goodwin, who instructs her to calm down the crowd. Angela points how exceedingly difficult that is, but Goodwin reminds her he has done favors for her in similar situations and is counting on her. Regardless of favors, Angela tells him he isn't giving her much material. Goodwin hangs up and receives a call from Mina. Goodwin knows what she is about to say and instructs her to tell the Signers that they are preparing their departure at once. After Mina closes contact, Goodwin lifts up his hand and removes his glove, revealing his metal hand.

The helicopter arrives and Trudge emerges. He ends up in a quarrel with Yusei. He drops it as Mina starts talking to him. He says it will be his honor to serve her and blushes as he informs her that he shall be capable of the mission.

Before everyone boards the helicopter, Yusei asks Goodwin to promise that after they defeat the Dark Signers and return everything to normal, Goodwin will complete the Daedalus Bridge. Goodwin asks if Yusei intends to emulate the man from the legend, and Yusei replies that if the story Goodwin told him is true, there will be no reason to discriminate the people from Satellite if they complete this task. Goodwin agrees and the other board the helicopter. Yusei thinks to himself that he will reunite Satellite and the city even if it means his life.

From the helicopter, the twins spot Tanner, Yanagi and Dexter waving to them. Seeing them reminds Yusei that they must win this battle for everyone's sake.

Turn 5: Crow
Crow draws. Lazar activates his face-down "Late Penalty" on Crow's Standby Phase. Now whenever Crow has no monsters during his Standby Phase, he will be forbidden from conducting his Battle Phase this turn. Crow Normal Summons "Blackwing - Sirocco the Dawn" (2000/900) in Attack Position without Tributing since Lazar has monsters on his field and he doesn't. Crow sets a card. He then activates "Reload" to return the card in his hand to his Deck and draw a new card. Crow then sets a card. On Crow's End Phase, the effect of "Jester Confit" activates, returning itself and "Blackwing - Sirocco of Dawn" to their owners' hands ("Jester Lord": 0 → 5000/0).

The Duel is postponed at this point due to an earthquake tremor.