Crow and Greiger continue their Duel while Yusei tries to stop it. During the Duel, Crow remembers his childhood in which he learned the importance of strategy and friendship.

Yusei, Trudge, Leo and Luna continue to make their way to the Killer Whale geoglyph. After Yusei ponders on who it could belong to, he turns the others and instructs that they stay behind as things are about to get dangerous up ahead. None of the three are pleased to leave him go alone. However Luna insists that they'll be fine, since her birthmark will protect them, if them from being sacrificed inside the geoglyph. Yusei allows them to come along, but says he'll run ahead to see who's dueling and they may follow him afterwards. Without any further notice, he ramps, launching his Duel Runner off the road and into the Turbo Duel circuit created by the geoglyph. 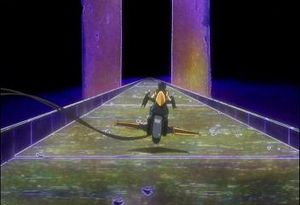 Crow pulls himself back on course.

Meanwhile, Crow, who has just been knocked off course, angrily pushes some buttons in the handlebars of his Duel Runner in his desperation not to lose, firing a grapple hook, which attaches to the Turbo Duel circuit and activating its wings, allowing him to glide back safely. Greiger sees Crow back on course and silently comments on his persistence. He Sets 1 card his Spell & Trap Card Zone. He ends his turn and, "Trap Reactor・Y FI's" ATK and DEF return to normal, as "Diving Exploder's" effect wears off.

Crow remembers what Yusei said about how dueling a Dark Signer, means putting your life on the line. Regardless he feels the stakes are no match for the fate of the children sacrificed earlier. 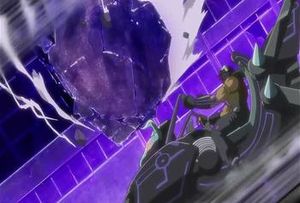 The piece of the building falls towards Greiger.

He begins his turn, drawing "Blackwing - Bora the Spear". Both players' SPC rises to 2. Crow activates "Speed Spell - Angel Baton", drawing "Blackwing - Elphin the Raven" and "Blackwing - Mistral the Silver Shield" and discarding "Elphin the Raven". He then Summons "Silver Shield" in Defense Mode and Special Summons "Blackwing - Bora the Spear" alongside it. "Bora the Spear" blasts "Trap Reactor・Y FI", with its "Death Spiral" attack. The explosion knocks a huge chunk off a building onto Greiger. However Greiger emerges with no visible damage, outside a loss of 900 Life Points. Crow is shocked to see how little an effect it has on him and that "Y FI" didn't even get destroyed. Greiger explains that he had played "Fake Explosion" after Crow declared the attack. This prevented "Y FI's" destruction and now allows Greiger to Summon "Summon Reactor・SK" from his hand. Crow analyzes the situation and believes Greiger plans Summoning "Spell Reactor・RE", allowing him to combine them to bring out "Flying Fortress SKY FIRE", like he did against Yusei during the Fortune Cup.

Greiger boasts that it's only natural he shall win the Duel as Crow is a non-Signer. Yusei then approaches the two Turbo Duelists and identifies the 2 of them. He is shocked to see that Greiger has become a Dark Signer. Greiger states that he has been reborn to seek vengeance on Goodwin through the powers of the Dark Signers. Seeing Yusei, as Goodwin's pawn, Greiger pronounces Yusei an enemy of his.

Yusei tries talking them into stopping the Duel. Crow refuses, as the Dark Signers caused the children he took care of to disappear and he feels he must avenge them. Crow mentions that his parents were killed in the Zero Reverse incident and recollects on what he did afterwards.

As far as Crow can remember, he wandered around Satellite with no place to go. He was lonely, without friends or people to love him and miserable. Looking around, he would sometimes find food and a bed and sometimes he wouldn't. 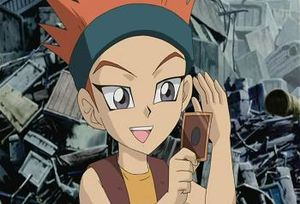 While wandering through a landfill site, he found a Duel Monsters card, "Crow Goblin". He left the dump, after finding more cards. In the present, Crow says, looking back, that Duel Monsters had saved him. 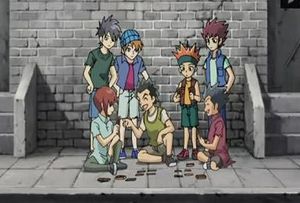 Crow with his new friends learning how to play Duel Monsters.

While wandering through the city with his findings, he is confronted by a group of older children. He is a bewildered at first, as they glare at him funny. But after asking him what cards he has, they start hanging out together. Having never went to school, Crow could barely read, write or do maths, but through Duel Monsters the other kids taught him. Despite having no money or education, Duel Monsters gave him friends.

Among the friends were Yusei and Jack. After meeting them, he realized that he wasn't alone anymore. Duel Monsters has saved him from the lonely world he was imprisoned in.

Crow remarks that now there are plenty of kids in Satellite in the same situation as he was. He had wanted to share with them the lessons he had learned from Duel Monsters.

Greiger says he'll take Crow on, for vengeance is the darkness of one's heart which will never die out. Yusei pleads with them to stop; they have both suffered the same wounds and should be understanding of each other, not fighting. Crow shouts back to Yusei, asking where are they supposed to vent their anger. Yusei responds that revenge just breeds more revenge. Crow's mind agrees with Yusei, but his heart pushes him to continue the Duel. He pleas with Yusei to understand and as his friend to just watch their Duel. Crow's tears hit Yusei's visor and he agrees to see the Duel through to the end.

Greiger continues the Duel, starting his next turn. He draws "Darksea Rescue" and both players Speed Counters rises to 3. He Summons "Spell Reactor・RE" and uses the effect of "Summon Reactor・SK"; Releasing all 3 "Reactor" monsters, he Special Summons "Flying Fortress SKY FIRE" from his Deck. Using the "Sharp Shooting" effect of "Flying Fortress SKY FIRE", he sends "Dark Tuner Doom Submarine" from his hand to the Graveyard and destroys "Blackwing - Mistral the Silver Shield". Using its "Death Airraid" attack, "SKY FIRE" takes out "Blackwing - Bora the Spear", but Crow uses the effect of "Blackwing - Mistral the Silver Shield" to reduce the damage to 0. Greiger then ends his turn.

Crow remembers the hard time "SKY FIRE" gave Yusei during the Fortune Cup. Had he not learned of its effects back then, he would have taken the damage head-on.

Crow begins his turn and draws "Blackwing - Gale the Whirlwind". Both players' SPC rises to 4. Crow concentrates on "SKY FIRE's" effects; it will destroy the first card he plays or Sets and inflict 800 damage. He plans how to work around this and Summons "Blackwing - Vayu the Emblem of Honor" in Defense Position. This triggers the "Death Drop" effect of "SKY FIRE"; a series of shells are dropped onto "Vayu", destroying it and inflicting 800 damage to Crow.

The impact of the attack, causes Crow to lose control of his Duel Runner, but he slides out its wings, which keep it from toppling over. Yusei fears that although Crow survived that attack, his body won't be able to take many more.

Crow activates the effect of "Blackwing - Vayu the Emblem of Honor", removing from play itself and "Blackwing - Elphin the Raven" from his Graveyard, and he then performs a Synchro Summon. Chanting, "Darkened gales, become the wings which will soar to the heavens. Synchro Summon! Black Feather - Armored Wing" as he Summons "Blackwing Armor Master". Crow Special Summons "Blackwing - Gale the Whirlwind" alongside it. Greiger deduces that Crow predicted "Vayu" would be destroyed by "SKY FIRE", which up give him the chance to Summon these 2 monsters. Although he stands assured that it doesn't hold a candle to "SKY FIRE", who is superior in terms of ATK.

However, Crow sends "Armor Master" to attack "SKY FIRE". Using its "Black Hurricane" attack, "Armor Master" launches a punch at the stronger monster. Yusei recognizes this move, from when he and Crow Tag Dueled Sector Security. Due to its effect, "Armor Master" isn't destroyed and Crow takes no Battle Damage. Greiger asked why Crow attacked in vain and Crow directs his attention to the wedge it drove into "SKY FIRE". By removing the Wedge Counter, the ATK of "SKY FIRE" hits 0, allowing "Blackwing - Gale the Whirlwind" to easily dispose of it. 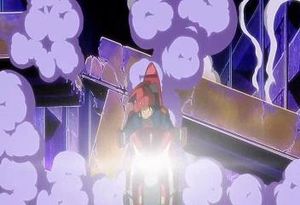 As his monster explodes, Greiger's Duel Runner is knocked out of control and crashes into a supporting pillar of a bridge. Yusei speeds past the collapsing bridge to catch up with Crow, leaving Greiger behind.

Crow boasts to Yusei that he's held out well for a non-Signer dueling a Dark Signer. But Yusei is sure that Greiger won't go down so easy. Greiger reappears behind them damning Crow and his tricks. His Life Points and SPC drop to 1800 and 3 respectively. Remarking that Greiger cannot catch up with him Crow Sets 1 card in his Spell & Trap Card Zone and ends his turn. Taking Crow's words into account, Greiger says that if can't catch up with Crow, he'll just have to drag Crow back to him.

Greiger starts his turn. His SPC raises to 4, while Crow's raises to 5. Since he has no monsters out, he Special Summons "Dark Tuner Doom Submarine" from his Graveyard. The presence of the Dark Tuner causes a mark to glow on his face. Disgusted that Greiger Summoned a Level 9 monster so easily, Crow causes such play "cheating", but Greiger calls it the powers of the netherworld. Next he Normal Summons "Darksea Rescue".

He Dark Tunes both monsters and chants "When the shadows are devoured by even darker shadows, the curtain pulls back and reveals a world without light! Come forth, Dark Flat Top", as he Dark Synchro Summons "Dark Flattop". The massive battleship descends from pitch-black clouds onto the field. Crow laughs and remarks that although the monster is bigger, it doesn't mean it is better.

"Blackwing - Bora the Spear" attacks "Trap Reactor・Y FI", but Greiger activates his face-down "Fake Explosion" to prevent his monster from being destroyed by battle this turn (Greiger 4000 → 3100). Greiger then activates the second effect of "Fake Explosion" to Special Summon "Summon Reactor・SK" (2000/1400) from his hand in Attack Position.

Turn 4: Greiger
Greiger draws "Darksea Rescue". During the Standby Phase, the effect of "Speed World" activates (Crow's SPC: 2 → 3; Greiger's SPC: 2 → 3). Greiger Normal Summons "Spell Reactor・RE" (1200/900) in Attack Position. He then activates the third effect of "Summon Reactor・SK" to send it, "Trap Reactor・Y FI", and "Spell Reactor・RE" to the Graveyard and Special Summon Flying Fortress SKY FIRE" (3000/2500) in Attack Position. Greiger then activates the second effect of "Flying Fortress SKY FIRE" to send "Dark Tuner Doom Submarine" from his hand to the Graveyard and destroy "Blackwing - Mistral the Silver Shield". "Flying Fortress SKY FIRE" then attacks and destroys "Blackwing - Bora the Spear", but Crow activates the effect of "Blackwing - Mistral the Silver Shield" to reduce the Battle Damage he takes to 0.

Turn 6: Greiger
Greiger draws. During the Standby Phase, the effect of "Speed World" activates (Crow's SPC: 4 → 5; Greiger's SPC: 3 → 4). Greiger then activates the effect of "Dark Tuner Doom Submarine" to Special Summon itself from his Graveyard (0/300) in Attack Position as he controls no monsters. He then Normal Summons "Darksea Rescue" (0/0) in Attack Position. Greiger then dark tunes "Darksea Rescue" with "Dark Tuner Doom Submarine" in order to Dark Synchro Summon "Dark Flattop" (0/3000) in Defense Position.