"Soul Binding Gate! The Sealed Future!" is the one-hundred-and-fortieth episode of the Yu-Gi-Oh! 5D's anime. It first aired in Japan on December 22, 2010. The episode was never dubbed, but became available to the world with official subtitles via Crunchyroll on March 10, 2015.

Having seen through Sherry's trick, Akiza and Crow break the effect of the Field Spell "Ecole de Zone". But using the power of card which was a keepsake from her father, Sherry uses "Z-ONE", activating a new Field Spell "Soul Binding Gate".

"Z-ONE" was just destroyed, allowing Sherry to activate its effect. With it, she declares that shall send her opponents to their grave. Akiza questions Sherry's motive again and learns that she wants her family back. Wondering what this means, Akiza asks what wish Sherry asked Z-one for. Sherry reflects on a meeting she had with Z-one after being sucked out of the dimension shuttle.

Z-one explains that he has the power to grant any wish. Sherry then agrees to use her strength to defend his cause in exchange for him granting her wish in return. With that Z-one assigns her the task of defeating Yusei. Sherry is surprised at first, but insists that she doesn't care as long as they have their deal. Z-one then asks Sherry to lend him her power and the card "Soul Binding Gate" appears beside them. 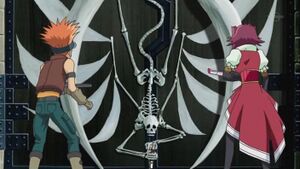 With the effect of "Z-ONE" Sherry removes the Field Spell Card "Soul Binding Gate" from her Deck from play, allowing her to play "Z-ONE" on the field with the effect of "Soul Binding Gate" and the inability to be destroyed. A large wall and gate wrap around the Planetary Gear, and a skeleton fixed to the gate clasps its hands around Sherry's body. Sherry vows to prevent Akiza and Crow from ruining Z-one's plan, even at the cost of her life. Crow is curious about this, but Sherry urges them to continue the Duel.

Akiza Summons "Crystal Rose Spirit", but Sherry points out that the copied effect of "Soul Binding Gate", destroys monsters Summoned with ATK lower than Sherry's Life Points and inflicts 800 damage to each player. The monster is destroyed and Akiza, Crow and Sherry's Life Points drop to 1150, 1700 and 3200 respectively. The three players suffer a massive amount of pain from the damage they suffice, which Crow realizes is caused by "Z-ONE". Since its real damage, Akiza assumes that losing will cost them their lives, which Sherry confirms.

Since Sherry has 3200 Life Points, Crow thinks it would be difficult to Summon a monster with enough ATK to avoid immediate destruction. He thinks about using the effect of "The Soul Binding Gate" to lower Sherry's Life Points and subsequently the the minimum ATK, but that would also cause him to lower Akiza's Life Points and quickly drop them to 0. Akiza realizes what Crow is thinking and orders him not to worry about her. She Sets a card in her Spell & Trap Card Zone and ends her turn.

Crow starts his turn. His hand contains "Chaos Life", "Blackwing - Hurricane the Tornado" and "Level Wing". "Hurricane the Tornado" is the only monster in his hand, and can allow him to Synchro Summon later. However since it only has 0 ATK, he decides against Summoning it, so he Sets the other two cards and ends his turn. Sherry laughs at his refusal to Summon a monster, and asks if this is how friends protect each other.

However, Sherry did not plan her victory with only a direct attack. Instead, she uses the effect of "Sorciere de Fleur" to Special Summon "Crystal Rose Spirit" from Akiza's Graveyard, which gets destroyed again. Sherry bids farewell to Akiza and claims that Crow's defeat would quickly follow. However Crow refuses to let Akiza lose and activates "Chaos Life". Since an effect was about to reduce a player's Life Points to 0, "Chaos Life" negates the damage and increases their Life Points by the same amount. The three players Life Points return to 1150, 1700 and 3200.

Sherry attacks Crow directly with "Sorciere de Fleur", but Akiza activates "Crystal Veil". By removing the "Crystal Rose Spirit" in her Graveyard from play, she inflicts damage to Sherry equal to half its ATK and negates the attack. Sherry's Life Points are dropped to 2500 and Crow and Akiza exchange thanks.

Sherry asks if they think that that one move is going to make her lose. She claims that the result of the duel will be the same with or without the effect of "Soul Binding Gate".

Crow pleads with Sherry to end the Duel, but with the chance of reuniting with her family Sherry refuses and says that Crow would do the same thing given the chance. Crow disagrees, but Sherry is sure that the truth would speak differently. To demonstrate, she uses the power of "Z-ONE" to show them a vision. 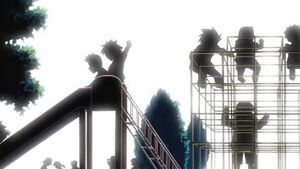 The playpark in the world Sherry says Z-one can make.

Crow and Akiza find themselves in a play park. Silhouettes of a number of children, including Crow's orphan friends; Daichi and Ginga and present. In the vision the children's parents are alive. Daichi and Ginga run and hug them as they are called. Sherry explains that this is the world changed by Z-one's power, a world where people get everything that they wish for. Deep in his heart, Sherry says that Crow knows that the Zero Reverse ruined people's lives. However in this world people are able to see their real families, she explains. Once the Duel is over, Sherry says that she shall be going to this world. The vision ends and Sherry ends her turn.

Akiza realizes that Crow has been moved by the vision, but urges him not to listen to Sherry as they must save the city, Yusei and the others. She asks him whether it is truly worth it to bet the safety of the people of Neo Domino City on a slim chance of getting the children's parents back.

Akiza begins her turn and draws "Synchro Stream", with which she sees as possible way to get through to Crow. To Crow's surprise, Akiza Summons "Blue Rose Dragon", which gets destroyed and drops her, Crow and Sherry's Life Points to 350, 900 and 1700. The effect of "Blue Rose Dragon" then allows Akiza to revive "Black Rose Dragon" from her Graveyard with its effects negated. It is not destroyed as its ATK surpasses Sherry's Life Points. She Sets "Synchro Stream", entrusting the duel to Crow and ending her turn. 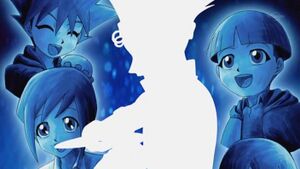 Crow thinks of the children.

Before Crow draws, Sherry advises him to think carefully, reminding him that by giving up this Duel, he can have the children reunited with their families. Crow thinks of Taiga, Kokoro, Ginga, Daichi, Hikari and reuniting them with their families. Akiza tries to remind him of their true mission, but Crow is reluctant since he might cause her to lose. Sherry points out that Akiza has only 350 Life Points and if Crow Summons a monster with less than 1700 ATK, she will lose. Akiza tells Crow how Yusei had saved her from the darkness of her Psychic Powers because he put his life on the line to change her. Because of that moment, her powers faded and a new her was created. Akiza tells him firmly that if you believe in your own potential and live on, you're bound to change the future. She tells him to believe in the future of those children and live with how things are to the fullest, then asks him if that isn't how he thinks. Crow takes what Akiza said to heart, reflects on how Yusei and Jack have always helped him out and apologizes to everyone for nearly making a mistake.

Crow stares back now determined at their opponent. Sherry questions Crow on how he can abandon the only chance of everyone getting back their families, but Crow responds that he believes in the future of the city and in Yusei.

Crow draws "Rendering Tuning", looks at all his cards and examines the Duel. He wonders why Akiza Summoned "Black Rose Dragon" if she is trying to protect her Life Points. Thinking about her face-down card, Crow gets an idea of what she's doing and believes in Akiza. He activates "Blackback", reviving "Blackwing - Bora the Spear" from his Graveyard and losing the ability to Normal Summon this turn. With 1700 ATK, "Bora" is not destroyed. Crow then activates "Rendering Tuning" to Special Summon "Blackwing - Hurricane the Tornado" from his hand. Due to its effect, the ATK of "Hurricane" becomes that of "Black Rose Dragon", also preventing it from being destroyed. With his final card, "Level Wing", he increases the Level of "Hurricane" to 4. He tunes his two monsters and Synchro Summons "Black-Winged Dragon".

Sherry asks what awaits someone like her who has lived their entire life waiting for revenge. her father only left her the power of the card "Z-One". Again, Crow asks her what her parents would say if they saw her now. Sherry yells at him to stop: she spent her life trying to avenge her parents, but hasn't seen them in that time and asks how Crow would know how that feels. Crow claims that being able to live on is enough, and that destroying a city to bring back lost family members is unnecessary. Crow exclaims that if people believe in the future, anything can happen. Sherry repeatedly yells at him to stop and the skeleton lifts her up higher.

Elsewhere Z-one views a diagram of the Planetary Gears and sees one of them stop. 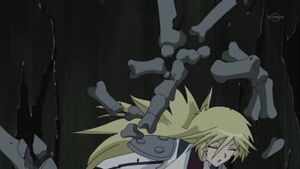 Back at the gear, the walls created by "Soul Binding Gate" begin to crumble. As the skeleton shatters, Crow rushes over to try and save Sherry as she falls. Seeing the danger he's putting himself in, Akiza runs after him.

On the way to the other gears, Jack, Leo, Luna, Yusei and Vizor realize that Crow and Akiza have done it.

As Sherry lies on the ground, she hears her father's voice and has a flashback of her childhood.

Sherry and her father flashback[edit] 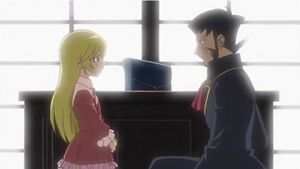 Sherry's father had once told her that the way of life prevents people from knowing if they will be happy or sad, but tells Sherry that she must never give up, and task herself to do justice so the future can look brighter. He then gives her the teddy with the "Z-ONE" card hidden inside.

Sherry says that her father was right and apologizes. 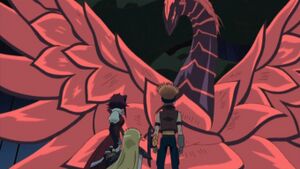 Crow and Akiza, who were lying injured next to her get up and wonder what happened. They look up and see that Black Rose Dragon protected them from the larger parts of the crumbling wall. It then heals them and vanishes, leading Crow to speculate the true nature of psychic powers.

Sherry asks Akiza and Crow what she can do in her current state. If she has nothing left, Crow suggests that she assist them in changing the future. Taking another look at "Z-ONE" Sherry remembers her father advising her to task herself to do justice and agrees to help. Crow suggests that they get going to the center gear, where Yusei should be waiting for them.

... continued from the previous episode.

8/2900/0) in Attack Position (The effect of "Soul Binding Gate" doesn't activate at this point as the monster that was just summoned has ATK that is equal to or higher than Sherry's Life Points).

1 → 4). Crow then tunes "Blackwing - Bora the Spear" with "Blackwing - Hurricane the Tornado" in order to Synchro Summon "Black-Winged Dragon" (

The following cards were used in this episode. Cards in italics debuted here.