This chapter was first printed September 21, 2009 in the 11/2009 issue of theV-Jump magazine. It was later reprinted in the American Shonen Jump magazine, and in volume 1 of the tankōbon.

Yusei Fudo faces the Skeleton Knight in a Duel.

The Skeleton Knight leaps down from the altar to Yusei and imposes a Turbo Duel with Sect as the ante. Yusei refuses to use his friend as an ante. Seeing Yusei is attached to his friend, the knight calls Yusei a human duelist. He puts down his spear and suggests Yusei duel for his soul instead. Yusei accepts. 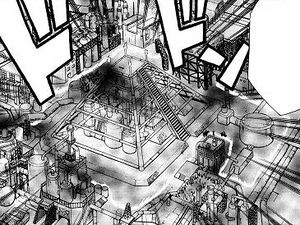 The flames forming the Duel circuit.

Flames erupt from the ground and form a wall around the altar. This is to be the circuit for their Turbo Duel. Both duelists line up and Yusei is surprised to see that the Skeleton Knight is using his horse, rather than a typical Duel Runner.

The two speed off. Yusei moves well into the lead, getting around the first corner, allowing him to go first. He draws a card, but feels a strange presence and hesitates.

Yusei Summons "Junk Armor" in Defense Position and plays "Junk Splash" inflicting 500 damage to the Skeleton Knight times the number of "Junk" monsters he controls. The Skeleton Knight is hit by a shower of screws, lowering his Life Points to 3500. Yusei smiles and asks the knight how he felt about that. He Sets a card in the Spell & Trap Card Zone and ends his turn.

Looking back at his move; he played a monster in Defense Position and damaged his opponent, Yusei doesn't see any flaw there. However the Skeleton Knight asks him what he is afraid of. Yusei pauses and wonders if there is something he should be fearing. The Skeleton Knight laughs as he says that Yusei does have a reason to be afraid of him.

The Skeleton Knight begins his turn and Special Summons "Hellfire Spearman Ghost Lancer" from his hand using its effect. He gets it to attack "Junk Armor". "Ghost Lancer" leaps into the air and jabs its lance into "Junk Armor", cutting it in two. Since it inflicts Piercing damage, the tip of lance passes through the monster and hits Yusei, inflicting 800 damage. Yusei is surprised by the magnitude of the pain he took, as his shoulder pad is broken off and his Duel Runner starts to spin out of control. Yusei manages to regain control and is shocked to have taken such a hit. He wonders what he's up against, but starts to see his soul is attached to this Turbo Duel. 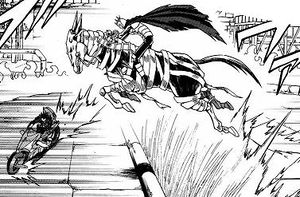 Yusei and the Skeleton Knight, as they pass the wall of fire.

Continuing forward, Yusei sees a wall of fire up ahead. He pulls a sharp turn and drives around it. The Skeleton Knight is surprised that Yusei could bear the Dark Sense. He leaps over the flame and overtakes Yusei.

The Skeleton Knight claims that Sect's unwholesome atmosphere was the cause of his defeat. Yusei gets mad hearing the knight speak ill of his friend. He vows to win and Sect back with the pride of a duelist.

Yusei begins his turn and plays "Advance" to Special Summon "Junk Blader" from his hand. Next off he Summons the Tuner monster, "Screwturn the Apprentice Warrior". Yusei tunes his two monsters to Synchro Summon "Mighty Warrior". 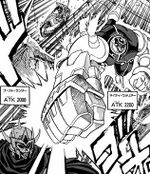 Yusei attacks the Skeleton Knight, while riding along the wall.

Yusei speeds ahead, and uses an out of place girder to ramp high into the air. He rides along the side of a wall at the edge of the factory and continues his attack as he does so. "Mighty Warrior" uses its "Mighty Knuckle" attack to destroy "Hellfire Spearman Ghost Lancer". The Skeleton Knight's Life Points drop to 3300. "Mighty Warrior" then launches its fist as a missile at the knight, as its uses its "Rocket Knuckle" effect to inflict damage equal to half "Ghost Lancer's" ATK to the knight. The Skeleton Knight takes another 1000 damage, lowering his Life Points to 2300. Yusei lands off the wall in front of the knight. 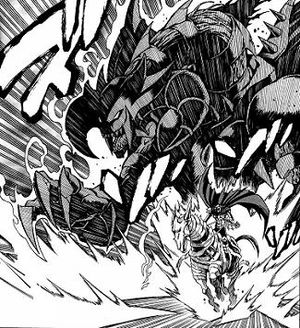 The monster Summoned by the Skeleton Knight.

The Skeleton Knight begins his turn. He Summons "Hellfire Sleeping Beauty, Ghost Sleeper" and plays "Ghost Fusion". Yusei gazes up in shock at the massive monster that the Skeleton Knight has Summoned. The Knight tells Yusei that he is about to witness his power.