This chapter was first printed October 21, 2009 in the 12/2009 issue of theV-Jump magazine. It was later reprinted in the American Shonen Jump magazine, and in volume 1 of the tankōbon.

Yusei Fudo continues his Duel with the Skeleton Knight. The knight Summons "Underworld Dragon Dragonecro". Yusei is injured and almost knocked out, but manages to come back.

Yusei is right in front of the Skeleton Knight with 3200 Life Points, while the knight has 2300. Yusei has "Mighty Warrior" on his side of the field. The knight has "Hellfire Sleeping Beauty, Ghost Sleeper" and is just after playing "Ghost Fusion". Yusei vows to win the Duel for Sect. 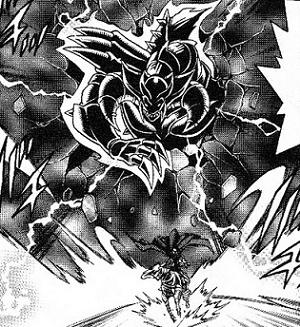 The entrance of "Underworld Dragon Dragonecro".

The Skeleton Knight thanks Yusei for the pain and in return he shall show him some of his power. "Ghost Fusion" activates and fuses " Hellfire Sleeping Beauty, Ghost Sleeper" with the "Hellfire Dragon, Ghost Wyvern" in is Deck. The two monsters are dragged into a vortex. The souls are calling the master of the Underworld, the knight explains. A new creature emerges by breaking a hole in the dark. The monster, "Underworld Dragon Dragonecro", is Summoned to the Skeleton Knight's side of the field in Attack Position with 3000 ATK. Yusei is surprised to see such a massive creature and the entrance it made.

The Skeleton Knight starts his Battle Phase. He has "Underworld Dragon Dragonecro" attack "Mighty Warrior". "Dragonecro" takes a bite from "Mighty Warrior" and pulls out a blackened version of the same monster. Yusei's Duel Runner starts to swerve and his Life Points lower to 2400. 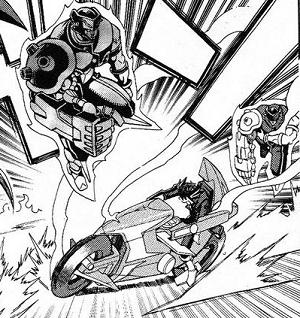 Yusei struggles to stay conscious as he comes close of a wall of fire. He starts to wonder if he can even beat a monster with such a Dark Feel. Meanwhile over on the alter, Sect starts to barely move and says Yusei's name. Standing himself up, he stats that he doesn't believe his rival Yusei will be defeated here and that he shall be the only duelist to defeat Yusei. He screams out Yusei's name, causing Yusei to quickly regain control of himself and pull clear of the fire.

Yusei activates his face-down card "Shock Draw", allowing him to draw 1 card for each increment of 1000 damage he took last turn. He draws 3 cards and convinces himself that the monster he's up against can be defeated and refuses to lose the Duel. 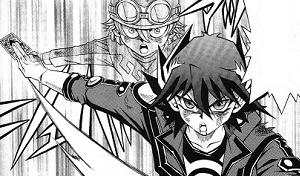 Yusei and Sect draw the card.

Yusei begins his turn. As he draws, Sect makes the same hand movements. They both close their eyes and touch their arms, where Yusei has his Deck fastened. Imagining Sect behind him in the same position, Yusei draws his next card; "Righty Driver".

Yusei and the Skeleton Knight are now side-by-side. Yusei Sets 2 cards in his Spell & Trap Card Zone. The knight laughs that this interesting that Yusei could push him this hard.

The Skeleton Knight starts his turn and leaps up to higher ground. Yusei notices him speeding up and vows not to let him get ahead and speeds up.

The knight commands "Dragonecro" to steal a new soul. The dragon starts to close in on "Lightning Warrior". Sect screams out Yusei's name, while the knight hopes that this should finish Yusei.