The kanji in this chapter's Japanese name is normally read as Zettai Ōja!! meaning "Absolute King!!". However the furigana make it Kingu!!, meaning "King!!".

This chapter was first printed December 21, 2009 in 2010's issue 2 of the V Jump magazine. It was later reprinted in the American Shonen Jump magazine, and in volume 1 of the tankōbon.

Jack stands at the edge of Satellite and looks across the city, quite annoyed as he states that this is the birthplace of Duel Runners. 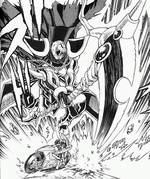 Yusei has Sect on the back of his Duel Runner, as he rushes to get him medical attention after their encounter with the Skeleton Knight. Suddenly Yusei notices a giant scythe-wielding monster ("The King of Divine Punishment, Dark Highlander", who is unnamed in this chapter) and swerves his Duel Runner, barely avoiding being struck by its weapon. As Yusei wonders what this monster is, Jack appears overhead on his Duel Runner, the Phoenix Whirlwind. He ramps down, landing next to the monster and facing Yusei. He is impressed that a Satellite scum could avoid such an attack.

Jack spots Yusei's Duel Runner and asks if he's a Turbo Duelist. Yusei asks if it matters, but Jack challenges him to a Duel. Yusei looks over his shoulder, back at Sect and declines in favor of helping him. He agrees to have the Duel later and speeds off.

Jack interprets this as Yusei running away and chases after him, refusing to let him get away. Yusei spots Jack coming after him and speeds up. He quickly turns and enters a tunnel. Jack smiles that this is fun and doubts that Yusei can outrun his fully tuned Phoenix Whirlwind. 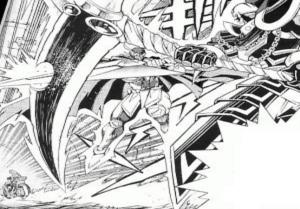 Jack's monster prepares to make another swing at Yusei. Realizing he can't outrun Jack, Yusei plays "Junk Blader" onto his Duel Runner, causing the monster to appear and defend him. In doing this, Jack says that they are now dueling and that Yusei has accepted his challenge. Seeing no other option, Yusei agrees to duel.

The monsters disappear and both players Life Points are set at 4000, as they begin an orderly Duel.

Since Jack controls 1 monster and Yusei has none, Yusei Special Summons "Junk Forward" using its effect. Yusei thinks to himself that he just needs to get to the end of the tunnel to reach the hospital and before he gets there, he should end the Duel as quickly as possible.

Jack smiles and activates his face-down card, "Dark Flare". This allows him to Special Summon a Level 4 or lower FIRE monster from his hand, after a monster is Special Summoned. He uses it to Summon "Red Lotus King, Flame Crime" in Attack Mode, which inflicts 400 damage to Yusei for each FIRE monster, Jack controls. Yusei's Life Points lower to 3600. 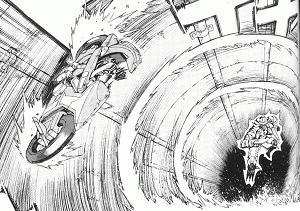 Yusei notices that Jack's Sense is quite different than that of other Turbo Duelists he's faced in the past. Still injured from his last Duel, Yusei is unsure if he can defeat Jack. For Sect's sake, Yusei thinks he can't afford to lose this one. 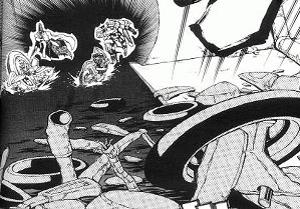 Yusei Summons "Screwturn the Apprentice Warrior". Jack sees the Tuner monster, but doubts that he also has Synchro Monsters. Yusei tunes his 2 monsters; "Screwturn the Apprentice Warrior" (Level: 2) and "Junk Forward" (Level: 3) to Synchro Summon "Scar Warrior" (Level: 5). Yusei spirals along the inside of the tunnel to charge up his Sense. Jack jokes about him doing acrobatics and Yusei has "Scarred Warrior" use its "Brave Dagger" attack to cut the head of "Red Lotus King, Flame Crime" off. "Red Lotus King, Flame Crime" is destroyed and Jack's Life Points drop to 3600. Yusei is surprised to see Jack is unaffected by his Sense.

Both duelists exit the tunnel and find themselves in a field of mangled Duel Runner parts. Yusei is shocked, but Jack laughs that he'll show him a real Sense; the Sense of a king, who will pulverize his Duel Runner to bits.

Cards in italics debuted in this chapter.