"One-Shot Run" ( Wanshotto Ran) is the eight chapter of the Yu-Gi-Oh! 5D's manga.

This chapter was first printed in March 21, 2010 in the 05/2010 issue of the V Jump magazine. It was later reprinted in the American Shonen Jump magazine, and in volume 1 of the tankōbon.

While riding his Duel Runner along the shore, Yusei reflects on his meeting with Lazar. Lazar gave him an invitation to the D1 Grand Prix, with a card required for entry inside. He tells Yusei about the D1 Grand Prix; it aims to gather the strongest duelists from around the world, regardless of race, religion or criminal record. Even someone from Satellite may enter. Silhouettes of Hunter Pace, Kalin Kessler, Sherry LeBlanc, Carly Carmine, Bolt Tanner, Tetsu Trudge and Greiger are shown as he says this.

The D1 Grand Prix is a battle to find the strongest Turbo Duelist in the world, the Turbo Duel Emperor, Lazar explains. A silhouette of Jack Atlas is shown as he says this. The Emperor shall receive everything, including fame and riches, he informs Yusei. However Yusei replies that he is not interested. Lazar acts surprised. He calls this a commendable feature on Yusei's behalf and in that case, asks how Yusei feels about pride. The winner of the D1 Grand Prix gets to face Jack Atlas, Lazar tells Yusei, pointing out that this could be a good opportunity for Yusei to get back his lost pride.

Lazar turns to leave, calling back at Yusei to think about it; give it about a week's worth of thought, for that is when the tournament starts. He sniggers and walks off. Yusei looks at the invitation card, "Checkered Flag of Glory" and thinks about a rematch with Jack. He returns to the hospital and sits next to Sect's bed, still staring at the card.

In the present, Yusei holds the card and stands at the end of a pier, looking towards New Domino City. 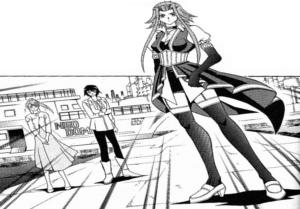 Yusei looks back and sees Akiza Izinski, who is with Mei and Sakura, having just got off a boat from the city. Akiza asks if he is a Turbo Duelist and says that she is looking for the one who dueled Jack Atlas. She wants to ask a few questions and notices the "Checkered Flag of Glory" in Yusei's hand.

Mei and Sakura inspect Yusei's Duel Runner. Mei calls it worn-out, but Sakura tells her that that is a rude way of putting it. She tries to think of a politer expression, pauses and says that it is rugged. Akiza notices that the Runner does display signs of prolonged use, but the parts important to the Turbo Dueling are kept intact well; a sign that Yusei looks after it. Mei tries to touch the Duel Runner, but Yusei yells at her. He apologizes afterwards, saying that he does not like other people touching it.

Yusei asks what would happen if he was to say that he knew Jack. Akiza responds that she and Yusei shall face each other in a One-Shot Run. Mei and Sakura are both surprised. Yusei on the other hand, doesn't quite understand what she means. Akiza explains that a One-Shot run is a one-on-one battle between both players ace monsters, whose ATK are equalized. Mei mentions that it is a traditional Duel style at Queen's Duel Academy. Yusei thinks he understands; if the ATK are equal, the battle will depend on the power of the players' Sense. Yusei remembers how his Sense didn't work on Jack, but accepts the challenge, thinking he must give this his all.

Both duelists have a shield, divided into six crests attached to both sides of their Duel Runner. Whoever is left with the most crests after the battle will be the winner. The two players face each other, with significant distance between them. Yusei and Akiza introduce themselves by name and Summon their ace monsters; "Lightning Warrior" and "Queen Angel of Roses", both of which have 2400 ATK.

Yusei and Akiza race towards each other. Yusei believes the only way he can raise his Sense is to speed-up, so he does that. Akiza suspects hesitation in Yusei's riding, deducing that he is uncertain about his power.

With Yusei's speed maxed-out, "Lightning Warrior" and "Rose Queen" collide. Yusei's Sense is enough to fully knock off one of Akiza's shields, much to her Mei and Sakura's shock. Akiza is also surprised, considering Yusei's hesitation. However, as it turns out, Akiza had managed to knock off all twelve of Yusei's crests. Akiza explains that Virtual Solid Sense also known as Sense is linked to a Duel Runner's speed, materializing the Solid Vision and increasing their force. The increase of Sense can be influenced by factors other than speed, such as distance and timing. Just recklessly increasing his speed, won't be enough to beat Jack, she tells Yusei.

Akiza calls Mei and Sakura back, so they can return to the city. Her friends are puzzled. Sakura asks why Akiza isn't going to ask Yusei about Jack. Akiza explains that she touched Yusei's Sense and that was enough to tell her what kind of Turbo Duel he had with Jack. She holds up her own "Checkered Flag of Glory" and wishes Yusei that she may see him again in the D1 Grand Prix, before departing.

With his head hung over, Yusei considers that there may be duelists stronger than him in the D1 Grand Prix. He looks up and smiles, saying that that got him fired-up and he shall be going to the D1 Grand Prix. 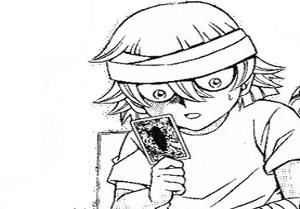 Sect gets a new card.

In the hospital, Sect has a dream about the Skeleton Knight. According to the ancient edicts, the knight says that he shall grant Sect's wish. Sect wakes-up frightened, but finds himself holding a card; a card that is not his.