This chapter was first printed on May 21, 2010 in the 07/2010 issue of the V Jump magazine. It was later reprinted in the American Shonen Jump magazine, and in volume 2 of the tankōbon.

Greiger vs. Yusei. Yusei is suddenly put in a tricky situation by a Fusion combo. Greiger follows up by Summoning monsters, aiming for a One Turn Kill.

Sect arrives at the stadium, wearing at the poncho and wonders if Yusei managed to make it on time. He looks up at the scoreboard, which says that Greiger and Yusei have 4000 and 1600 Life Points respectively. He's surprised to see that Yusei's is behind. He yells at Yusei to show everyone the outcome of his special training. Akiza looks over at Sect as he does so.

Greiger vows to crush Yusei in order to get his rematch with Jack Atlas. Yusei realizes that are both in the tournament for the same reason. Greiger rams his Duel Runner into Yusei's and speeds on ahead.

Greiger Summons "Pump-Action Commando". The other participants, who are watching, realize that Greiger has not yet used his Normal Summon for the turn and due to "Ignition Beast Volcanon", he has left Yusei's field open. "Pump Action Commando's" ATK is 1600, which is identical to Yusei's Life Points, they note, so Greiger is going for a One Turn Kill.

In Goodwin's box room, Lazar sniggers that they are going to see a One Turn Kill this early in the tournament. Mina reads out some stats on Greiger: He's the Mid-American Champion and is fearfully known as the "Undefeated Giant". Jack smirks and points out that he is not quite undefeated. Mina apologizes and Lazar laughs. 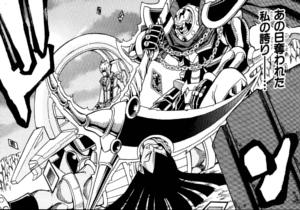 Greiger glances up at Jack and in the box room and recalls his defeat to Jack. A flashback shows Greiger lying on the ground with Jack's monster, "The King of Divine Punishment, Dark Highlander" holding its scythe up to his neck. Greiger's cards are fluttering around, while Jack sits nearby on his Duel Runner. Greiger cannot forget such a day, having his pride stripped away. Jack said that he was disappointed as he had been expecting to face a man called the "Undefeated Giant", but realizes that Greiger is no more than a mere dump. In the present, Greiger believes that he will reach Jack again soon. 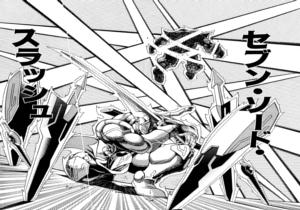 Yusei says that he feels sorry for Greiger, since Yusei believes himself to be one who will face reach Jack. Yusei announces that he shall win the D1 Grand Prix to reclaim his lost pride. Greiger along with the other contestants realize that Yusei is just like them. Hunter Pace says it's a nonsensical reason.

Yusei Sets a card in his Spell & Trap Card Zone and ends his turn. 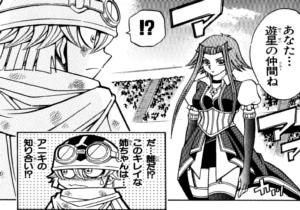 Sect getting shy when Akiza speaks to him.

Akiza approaches Sect and asks if he's with Yusei. Sect gets shy and wonders if Yusei knows this pretty lady. Sect starts acting tough and introduces himself as Sect Ijuin, Yusei's rival. Akiza asks him about Yusei's training; If it means he has developed a new Sense. Sect is stunned and wonders if Akiza has psychic powers. Akiza smiles at him and he says that she is right.

Yusei and Greiger finish their first lap, leaving with two more. Greiger compliments Yusei on his Sense, but says that he himself shall still be the winner. Greiger activates "Extra Fusion", fusing "Bombing Beast Fire Bomber" and "Firebird, the Burning Skywing" from his Extra Deck to Fusion Summon "Blaze Fenix, the Burning Bombardment Bird". He had been saving his "Sense Pressure" for Jack, he says, but shall use it on Yusei. This sounds interesting to Yusei, who accepts his challenge.

Greiger enters his Main Phase 2 and Sets a card in his Spell & Trap Card Zone.

Yusei enters his Main Phase 2 and Sets a card in his Spell & Trap Card Zone.