This chapter was first printed July 21, 2012 in the 9/2012 issue of the V-Jump magazine. It was later reprinted in volume 5 of the tankōbon.

In order to test the power of Yusei's Duel Dragon, Goodwin manipulates Leo and Luna to go after him. Now, Yusei has to face Leo and Luna once more in a Duel, but this time, the power of their dragons will decide the match.

Leo and Luna stand in a Duel Zodiac. While Leo impatiently waits for Yusei, Luna reads her fairy tale book, "The Black Magician of the Forest". The story tells that there was a black magician who was a selfish bully that would transform into a dragon to terrorize villagers, and curse those who stood up to him. Angered, the king asked the wisest old woman to punish the black magician and she requested that she take a broken scarecrow with her. The scarecrow swore on the rising sun to punish the magician and remove the curse that had been put on him. At the magician's house, the two discussed ho to defeat the magician's dragon form, and the woman told the black magician to mend his wicked ways or she would eat him. With the scarecrow using his shadow to trick the black magician into thinking that he was a monster, they captured the magician and he agreed to lift his curses, telling them to look upon the morning sun and think of their original shapes. The scarecrow did so, and he returned to the form of a handsome prince, hugging the old woman in gratitude, thus lifting her curse and returning her to the form of a young maiden. They went to see the king, were rewarded, and lived happily ever after. As she finishes it,closing the book, Yusei appears, wearing Sect's broken glasses around his neck, and faces the twins. Leo comments that it's about time. Luna calls him the black magician, telling him that she will punish him by order of the king, Shadow Miasma rolling off her. Yusei thinks that the twins are blocking his way again.

Meanwhile, Goodwin, who watches them through cameras, remembers when Leo used the money they earned through Turbo Duels to buy Luna the book, when they were still young. To Luna, the book is a precious treasure, and the depth of her feelings for it makes her vulnerable. He tells her to carry out the king's orders, his orders, calling Luna the wisest old woman in the country.

Then, the Duel begins. Leo tells Yusei that he's going to pay for that last duel with interest. Yusei replies that he's going to win this Star Ticket and break out of the second stage. Leo takes the first turn. Luna orders Leo to activate a Field Spell, activating her Fairy Tale Field Spell Card, "Fairy Tale Prologue: Journey's Dawn." She then tells him to get two monsters onto the field. Leo does so, Summoning "Wonko, Noble Knight of the Forest" and then Special Summoning the Tuner monster "Bat, The Forest Ninja," since there is a Field Spell in play. Yusei notes that's seven Levels total, and wonders if he's going to Synchro Summon "Power Tool" Then Luna begins the chant to Summon her Duel Dragon, "Ancient Pixie Dragon". Leo tells her to wait, pointing out that the Duel's just getting started, and telling her that he's got a strategy here. Luna eventually concedes, as Leo thinks that she's acting funny, and thinks that it feels that it'd be dangerous to Summon that Duel Dragon. Looking at a Trap Card in his hand, "Those We Protect" he thinks that he'll finish the Duel before she can call "Ancient" and that he's her big brother, it's his job to protect Luna. He Sets a card and ends his turn.

Yusei is surprised that they haven't Synchro Summoned, drawing. He Special Summons his "Junk Forward" from his hand since his opponent controls monsters, and then Summons "Screwturn, the Apprentice Warrior" Leo comments "attaboy, Yusei. Way to hustle," as Yusei tunes the Level 3 "Junk Forward" and the Level 2 "Screwturn" to Synchro Summon "Scarred Warrior." It attacks "Bat, The Forest Ninja", but Leo doesn't think so and he uses the effect of "Wonko, Noble Knight of the Forest" to redirect the attack to itself since there is a Field Spell in play, and "Scarred Warrior" destroys it with "Brave Dagger." However, when a monster destroys "Wonko," its ATK is reduced by 500. "Wonko's" sword hits "Scarred Warrior" and reduces its ATK to 1600. Luna gets angry at Leo, complaining that he is mistreating her monster. However, he soon calms her down, pointing out that they only take half the damage due to her Field Spell, reducing them to 3500 Life Points. Yusei ends his turn, and Luna asks if this is Leo's strategy. He states that it is, as he knew that Yusei would bring out a Synchro monster early, so he messed it up for him. She thinks that it's a bore, as he took damage without Synchro Summoning in the last Duel with the "black magician" and ended up losing though a tactical error. She thinks that he really is a broken scarecrow, but nothing like the book.

Back to Leo's turn, he draws and then activates the effect of "Journey's Dawn" to replace it with "Fairy Tale Chapter 2: Seething Sun." Yusei is shocked to see a Field Spell that automatically changes to a different card, and Leo enjoys his reaction - "Fairy Tale" is a sequential Field Spell. Luna corrects him, it's cycling, not sequential. As the sun cycles, the travelling party goes through trials as well. Leo Summons "Chip, the Forest Thief" and tunes the Level 4 "Chip" with the Level 3 "Bat," but instead of "Ancient Pixie Dragon", he Summons his "Power Tool Mecha Dragon". Luna complains that Leo isn't letting her Duel, but Leo denies it, he only Summoned "Power Tool" because his ATK is higher than "Ancient's." He claims that she's blowing things out of proportion, but Luna just tells him to shut up. Leo attacks Yusei's "Scarred Warrior", putting all of his Sense on it; however, "Scarred Warrior" is not destroyed due to his effect. Leo points out that "Seething Sun" doubles battle damage, and Yusei is reduced to 2600 Life Points. Ending his turn, Leo thinks that he'll keep forcing Yusei back with "Power Tool," if he beats Yusei, Luna will comes back. 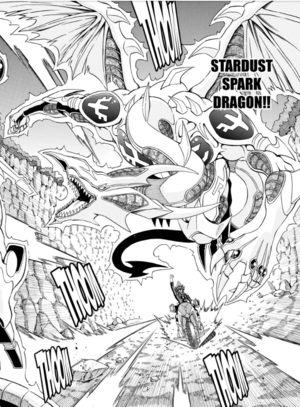 Yusei recalls the Duel Dragon from their last Duel, and notes Leo's resolution to protect Luna through his Sense, but remembers Sect, thinking that he also has feelings he can't abandon. Beginning his turn, Yusei draws "Quick-Span Knight" and he Summons it, tuning the Level 3 "Quick Span-Knight" with the Level 5 "Scarred Warrior," chanting "Flash of light that splits the sea of stars! Shake our souls and roar through the world!" as he Synchro Summons his new partner: "Stardust Spark Dragon". Both Leo and Luna observe what Luna calls the "black magician's" "dragon form."

Turn 2: Yusei
Yusei Special Summons "Junk Forward" (900/1500) from his hand via its own effect, as Leo controls monsters and he doesn't. He then Normal Summons "Screwturn the Apprentice Warrior" (500/800). Yusei tunes the Level 3 "Junk Forward" with the Level 2 Tuner monster "Screwturn the Apprentice Warrior" to Synchro Summon "Scarred Warrior" (2100/1000) in Attack Position. He attacks "Bat, The Forest Ninja", but the effect of "Wonko, Noble Knight of the Forest" redirects the attack for itself as a Field Spell Card is active. "Wonko, Noble Knight of the Forest" is destroyed; The effect of "Fairy Tale Prologue: Journey's Dawn" halves the battle damage, (Leo & Luna: 4000 → 3500) and the effect of "Wonko, Noble Knight of the Forest" decreases the ATK of "Scarred Warrior" by 500, as it was destroyed by battle ("Scarred Warrior": ATK 2100 → 1600).