Akiza seemed to have the Duel dominated, but is surprised by Sect evolving his Duel Dragon, turning the tables in the Ritual Duel.

Andre is thrown from his Duel Runner, his Life Points falling from 1200 to zero. He mutters that his opponent is tough, but points out that he helps run the tournament, and he asks Lazar, who is sitting on his Duel Runner, why he's blocking his way. Lazar dismounts, explaining that Andre was the second to make it through the Duel Gate to the second stage. Holding up a card, he explains that he's been ordered to seal Andre. Andre is horrified when Lazar materializes a card bearing Admire Derby's image, and clarifies that it isn't just him, lots of Andre's friends are here andhe won't be lonely. More cards appear, bearing the images of other Duelists in the D1 Grand Prix; Greiger, Ramon Kagura, Adolf Mueller, Bolt Tanner, and Hunter Pace. Andre is horrfied, as Lazar holds up a blank card, sealing him away as the price of his defeat. Andre is stated as having retired, with the Level 1, Level 10 and Level 11 Star Tickets. He muses that having the Duelists as both hostages and food for the Ultimate God is killing two birds with one stone and that Master Goodwin's resourcefulness in impressive. If the Duel Priestess loses, perfect, but if she wins, they'll use these hostages. He snickers as he holds up cards with Ran Kobayakawa, Mei and Sakura sealed inside, but his face takes on a darker turn when he notices Yusei driving past behind him, and growls that there are some things that he just can't overlook.

Yusei's only seen a maze of a factory since he's passed through the Duel Gate, and he wonders where it all leads. Then he sees light up ahead, with "Beelze, King of Dark Dragons" and "Hell Grub" squaring off against "Moonlight Dragon Black Rose." He screeches to a halt and dismounts, knowing that Sect is fighting, but he doesn't recognize the other Dragon. Jack explains that it's "Moonlight Dragon Black Rose," a Duel Dragon, and Yusei turns to see him watching the Duel from beside his own Duel Runner. He explains that it's bound to Akiza Izinski. Yusei wonders why Akiza is fighting a Turbo Duel with Sect. Goodwin and the Skeleton Knight both turn to look at the new arrivals, and Goodwin laughs that they're here. 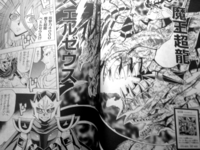 Up above, Sect only has 400 Life Points compared to Akiza's 4000. Sect cheekily comments that that winner's five of Akiza's is different now, and has gone off course. He muses that he might just win this after all. Akiza replies that trials like this are only natural on the road to achieving her destiny. She will overcome them, she will win, and she will shatter their wicked ambitions. Sect sneers, calling it fun. He weaves his Duel Runner through the air, claiming that he likes watching elite snobs who ride on predetermined tracks crash and burn. Akiza replies that there's no point in trying to unsettle her, as she and "Black Rose" will ride straight ahead. She activates "Black Rose's" effect; Sect Special Summoned a monster on this turn, so she'll return it to his Extra Deck. "Beelze" vanishes in "Black Rose's" "Rose Ballad," but Sect chuckles, claiming that he was waiting for that. He activates a Quick-Play Spell Card, "Hell Tuning." When a monster has left the field, he can exclude five "Hell" monsters from the Graveyard, and then use the monster that left the field to perform a Synchro Summon. He yells that watching Akiza dance to her belief in destiny was hilarious, and tells her to dance her last dance for him. He tunes the Level 8 "Beelze" and the Level 2 "Hell Grub," much to the shock of Yusei and Jack, the latter of whom wonders if the Synchro Monster will be even greater than "Beelze." Sect, his eyes glowing beneath his helmet, chants "O trillion maggots writhing on the earth! Transform yourselves and bury the heavens! The whole world is in the palm of our hand! Dominate it!" His skin heals and his scleras turn black as he Synchro Summons the 4000 ATK "Archfiend Uber Dragon Beelzeus." The Skeleton Knight muses that Sect is finally used to his Shadow power, and tells Sect to rise to the pinnacle of darkness.

Sect orders "Black Rose" to offer up its life to the king, activating "Beelzeus'" effect, reducing one monster's ATK to zero and allowing Sect to regain and equal amount of Life Points. Using its "Beelzeus Supremacy" effect, "Beelzeus" stabs "Black Rose" with a stinger, draining its life and colour. Sect claims that he doesn't care about destiny or future, as Turbo Duelists live right now, in this moment, this world. As his Life Points rise to 2800, he declares that he'll crush that selfish future of hers with his Shadow power. Akiza protests that she wasn't clinging to destiny, she just didn't want to see that hell repeated. Sect sneers that her wish didn't get through, and attacks with "Beelzeus." Yusei screams Akiza's name in horror as Sect tells her to fall before the fly-lord, and "Beelzeus" blasts energy from its torso mouth at "Black Rose," with "Beelzeus Extermination Forces," disintigrating the Duel Dragon and Akiza's Duel Runner. Akiza pummets from the sky, her Life Points reduced to zero. The Skelton Knight congratulates Sect as Jack sees a solar eclipse begin. Goodwin sneers in triumph.

Deep in the Aerial Fortress Seibal, a massive humanoid figure kneels dormant on the floor, restrained by chains. Its eyes, nothing more than black pits suddenly flare, blasting off their protective lids.

A shock wave blasts out from the altar, and Yusei looks up to see Sect holding Akiza's body, who has only just noticed them. Jack calls him a worm and tells him not to look down upon him. Yusei sadly observes that the Shadow power has an even greater hold of him now. The Skeleton Knight welcomes Yusei to Seibal, and Sect tells them that they'll be waiting for them. They ascend to the fortress, and Goodwin is next, as the two see him for the first time. Jack mutters that there's no point in fishing around for fine words, and when Goodwin asks his adopted son what's wrong, Jack yells that it won't be Goodwin who controls the Ultimate God, as it belongs to Jack. Goodwin reassures him that all who participate in the ritual have a chance to control the Ultimate God. He tells Jack that he's truly glad that he chose him as his son, to think a sewer rat like Jack would come so far. His foresight did not steer him wrong. Jack tells him to can it. Goodwin muses that his ambition has waited 5000 years, and now he's just one step away from achieving it. He tells them that they'll fine everything they want at Seibal, and invites them to follow him if they want to thwart his ambition, vanishing into the Fortress. Both Yusei and Jack are furious, Yusei thinks that he won't let Goodwin get away with this, and he'll rescue Akiza and Sect. Goowin can count on that. Jack angrily thinks that he'll make Goodwin regret calling him a sewer rat. Suddenly, Lazar approaches, explaining that the only way up to Aerial Fortress Seibal is up that pillar of light, but he can't let Yusei go.

The omake at the end of the chapter reveals that, an hour earlier, Jean and Andre had met up. Jean had only managed to get the Level 1 Star Ticket, while Andre had the Level 10 and 11 Star Tickets. Jean bemoans his inability to get more Star Tickets so that they could both go to the final stage together. Andre reassures Jean that he'll take the Star Ticket and Jean's wishes with him. As Andre raced off, Jean watched him, listed as having retired, while a giggling Lazar watched from behind a tree.