"The Final Showdown!!" (最終決戦！！ Saishū Kessen!!) is the fifty-ninth chapter of the Yu-Gi-Oh! 5D's manga

The final Duel between Yusei and Rex begins. Yusei, the King Who Unlocks, confronts Rex with his "Duel Dragon", "Stardust Spark Dragon"; However, Rex Summons the God, and uses the power of all other "Duel Dragons" against Yusei.

Aerial Fortress Seibal begins to rumble as Goodwin and Yusei face off. A strange Duel Runner appears for Goodwin and floats in the air, much to Sect's shock. Akiza points out that it isn't just the Duel Runner, but the fragments of Seibal are defying gravity as well. Goodwin claims that the laws of nature are becoming part of his power due to the power of the Ultimate God. Jack furiously notes that Goodwin stole their power and now only Yusei can fight him. Akiza laments that Yusei is already exhausted from his Duels and he still has to do this. Sect reassures her that Yusei will win. The two Duel Runners start off as Yusei and Goodwin declare, "DUEL!"

Yusei vows that he will defeat Goodwin and take back everyone's souls and cards; he's going full throttle from the start. But Goodwin accelerates ahead of him with ease and claims that his Duel Runner was created in Seibal, a super-ancient civilization. It may be a 5000-year antique, but it's certainly faster than the Yusei Go. He takes the first turn and draws, then since he has more than five cards in his hand, he Normal Summons "Wicked Priest Chilam Sabak" without Release. Akiza is shocked that Goodwin could Summon a high-Level monster so easily and Jack observes that Goodwin isn't using the "Celestial" Deck that he used when they Dueled. Yusei muses that Goodwin is planning to Summon the Ultimate God; "Chilam Sabak" is no more than its shadow. Goodwin then activates "Card of Heaven and Earth" since he Summoned a high-Level monster, allowing him to draw two cards, though he can't use either of them and will have to Set one face-down. He does so, then he ends his turn.

Yusei declares his turn and draws, then he Special Summons "Junk Giant" from his hand since his opponent controls a monster with a higher Level. Then he Normal Summons the Level 2 Tuner monster, "Screwturn the Apprentice Warrior", and tunes it with "Junk Giant". Sect cheers that Yusei is Summoning a Level 8 Synchro Monster and Goodwin realizes that Yusei is Summoning his Duel Dragon. Yusei chants, "Flash of light that splits the sea of stars! Shake our souls and roar through the world! Synchro Summon! Come forth! Stardust Spark Dragon!" "Stardust" attacks with "Shooting Blast" and Goodwin order "Chilam Sabak" to counterattack. Akiza gasps that both monsters have 2500 ATK, but Sect reminds her that "Stardust" has its "Sonic Barrier" effect, which negates its destruction, and thus only "Chilam Sabak" is destroyed. But the destroyed "Chilam Sabak" is revived with 0 ATK, its serpent heads transforming into replicas of its torso. Goodwin muses that it wasn't his monster's only effect. Yusei scowls in frustration and he Sets two cards to end his turn.

Goodwin declares his turn and he draws, giving him a total of six cards. He Summons a second "Chilam Sabak" without Release since he has at least five cards in his hand, and Akiza is shocked that Goodwin could Summon top-class monsters so easily. Goodwin declares that the preparations for the ritual are now complete, and he explains that ordinarily one must combine the Levels of the Tuner monster and the other Materials. But the resurrected "Chilam Sabak" has become a Minus Tuner monster via its effect, which instead subtract its Level from the other Materials. He minus tunes the Level 8 "Chilam Sabaks" and Sect realizes that Goodwin is Summoning a Level 0 Synchro Monster. Goodwin chants, "Source of strength that wells from the dimension of chaos! The origin and apex of everything! Slake your endless craving in this world for a brief time!" The eyes of the Ultimate God statue glow and the statue shatters and releases a red shape into the sky. Goodwin declares, "Descend! Ultimate God Ultimaya Tzolkin!" The Ultimate God dominates the sky; a Crimson Dragon whose form appears to be made of fire. 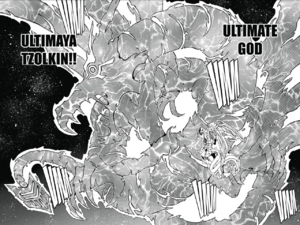 Seibal begins to crack and Sect wonders if it's because Goodwin Summoned the Ultimate God. Jack observes the dragon cloaked in a red aura, and he praises the sublime shape of the Ultimate God. Yusei races through the wreckage, and he wonders what powers the 0 ATK Level 0 Synchro Monster has. Goodwin claims that "Ultimaya Tzolkin" is a being that has transcended Level; it is a god. He Sets a card, prompting a shocked reaction from Jack and Yusei as "Ascension Sky Dragon" appears on the field. Jack asks why Goodwin's Duel Dragon has suddenly appeared, and Goodwin explains that the effect of "Ultimaya Tzolkin" only allows players to Set a single card each turn. But when Goodwin does so, he can Special Summon a Duel Dragon. He explains that the ATK of "Ascension Sky Dragon" is determined by the number of cards in his hand. He has four, so "Ascension Sky Dragon" has 4000 ATK. "Ascension Sky Dragon" attacks with "Ultimate Ascending Wave", and Yusei activates the "Sonic Barrier" effect of "Stardust" to protect itself. But the ground shatters beneath Yusei, and his Duel Runner tumbles into freefeall as his LP falls to 2500. Sect and Akiza scream Yusei's name, and Goodwin calls Yusei a fool for daring to defy a god and he claims that it's still too early to despair; this is merely the prelude to terror.

Turn 1: Rex
Since Rex has 6 cards in his hand, he Normal Summons "Wicked Priest Chilam Sabak" (2500/0) without Tributes via its own effect. He then activates "Card of Heaven and Earth"; since he Summoned a Level 8 monster, he draws 2 cards, however those cards cannot be used this turn. Rex Sets a card.

Turn 2: Yusei
Since Rex controls the Level 8 "Chilam Sabak", Yusei Special Summons "Junk Giant" (2000/2400) from his hand. He then Normal Summons "Screwturn the Apprentice Warrior". Yusei tunes "Screwturn" with "Junk Giant" to Synchro Summon "Stardust Spark Dragon" (2500/2000). He attacks "Chilam Sabak" with "Stardust", using the latter's effect to prevent its own destruction. "Chilam Sabak" is destroyed, and its effect activates; it is Special Summoned back from the Graveyard with its ATK reduced to 0; also, it becomes a Dark Tuner Monster. Yusei Sets 2 cards.

Turn 3: Rex
Since Rex has 6 cards in his hand, he Normal Summons a second "Chilam Sabak" without Tributes. He Dark Tunes the newly Summoned "Chilam Sabak" with the Dark Tuner "Chilam Sabak" to Dark Synchro Summon the Level 0 "Ultimate God Ultimaya Tzolkin" (0/0) in Attack Position. He Sets a card. The effect of "Ultimaya Tzolk'in" activates; Rex Special Summons "Celestial Conquering Dragon - Drago Ascension" (?/3000). Since Rex's hand is currently 4, the ATK of "Ascension" becomes 4000. Rex attacks "Stardust" with "Ascension", with Yusei using the effect of "Stardust" to prevent its destruction (Yusei 4000 → 2500).