Yu-Gi-Oh! 5D's Wheelie Breakers is a Yu-Gi-Oh! 5D's game for the Nintendo Wii, it is a mix of racing and dueling with cards used as "power-ups", very similar to the Mario Kart series. Characters who don't have D-Wheels in the anime are given exclusive ones for this game (Such as Leo, Akiza Izinski, Luna, and Mr. Armstrong). Some card effects have been changed in the game to be more suitable for the style of the game.

The story mode takes the player, guided by Rally, through many head-to-head duels, leading up to the Fortune Cup and a duel with Yusei. Duels with Turbo Duelists such as Trudge, Greiger,and Hunter Pace are done in the real world, while those who don't use Duel Runners, such as Luna, Leo, and Akiza, duel using virtual simulators. Between levels, it is shown that Goodwin and Lazar are conspiring to use you for a special mission. 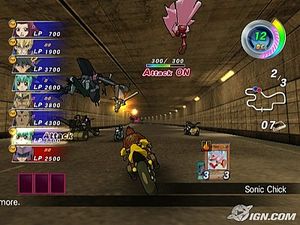 The game is more akin to a racing game than Duel Monsters. Players can use monsters to defend themselves and attack opponents, magic cards that power up the player, and trap cards that can defend against player attacks. Monsters can attack if the player has enough Speed Counters that accumulate with racing, and more powerful monsters will require more Speed Counters to attack. Players each have 4000 Life Points, though a player does not lose if he/she reaches zero, they just spin out. This game will also offer a 7 opponent runner mode in which cards will change their effects to power that can help or trap players, just like "Level Down!? that will "decrease the Top Speed of a player in a higher place than its owner for a limited" moment. In this mode, cards will be power-ups just like in Mario Kart Series.

Linking Yu-Gi-Oh! 5D's World Championship 2009: Stardust Accelerator with Wheelie Breakers using the DS's Wireless Connectivity will give you 10 DP as well as unlocking "Dark Resonator" for purchase in the shop if it hasn't been unlocked yet. The second time that you connect Stardust Accelerator, you will get 5000 DP and you will unlock "Blue Eyes White Dragon" for purchase in the shop.