"Bad Business", known as "You Show School's Crisis!! LDS Invasion" in the Japanese version, is the eighth episode of the Yu-Gi-Oh! ARC-V anime. It first aired in Japan on June 1, 2014 and in Canada on September 18, 2015. It became available with official subtitles via Crunchyroll on November 15, 2016.

After Sylvio’s Duel with the mysterious man who looks like Yuya ends with him taking a ton of damage from a monster made from an Xyz Summon, word of it reaches the ear of Declan, the CEO of Leo Corporation. His mother, Henrietta, who just returned to the country, also receives a report about it. Followed by the elite of the Leo Institute of Dueling, she marches to the You Show Duel School that the criminal Yuya goes to. And they plan to... 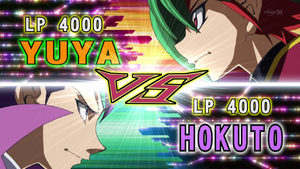 At the start of the Duel, the Field Spell Card "Cosmic Sanctuary" is activated, as per the rules of an Action Duel. It will allow the players to use Action Cards, but they may only have one in their hand at a time. 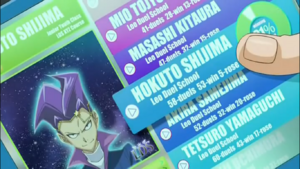