"Something's Fishy", known as "Ayu's Entertainment Aquarium" in the Japanese version, is the twenty-eight episode of the Yu-Gi-Oh! ARC-V anime. It first aired in Japan on October 19, 2014 and in Australia on December 5, 2015. It became available with official subtitles via Crunchyroll on November 22, 2016.

The Arc League Championship finally kicks off. Following Frederick's smooth victory as the first representative for You Show Duel School, Allie is next to Duel for the Youth. Allie's opponent is Riley, known as "The Treasure of Leo Institute of Dueling". In contrast of the enthusiastic Allie who receives the support of everyone, Riley seems to be afraid of something. While Declan and Henrietta watch, Riley utilizes a strange strategy to copy Allie's monsters. 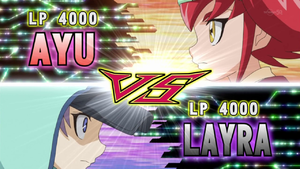 At the start of the Duel, the Field Spell Card "Sun Valley" is activated, as per the rules of an Action Duel. It will allow the players to use Action Cards, but they may only have one in their hand at a time.

Turn 5: Allie
Allie Tributes "Guppy" to Tribute Summon "Aquaactress Arowana" (2000/2000). Because the monster it was targeting left the field, "Layer 1" is destroyed. "Arowana" attacks directly, but Riley activates his face-down "Instant Shutter", Special Summoning it as a Normal Monster with the same name, Type, Attribute, Level, ATK, and DEF as "Arowana" (2000/2000), but it will be destroyed at the end of the Battle Phase. By the effect of "Aquarium Set", it gains 600 ATK (Riley's "Arowana" 2000 → 2600). Allie activates her face-down "Aqua Story - Urashima", banishing two "Aquaactress" monsters from her Graveyard to make the ATK of one of her opponent's monsters 100 and prevent its ATK from being changed by other card effects this turn. She banishes "Guppy" and "Tetra" and targets Riley's "Arowana" (2600 → 100). "Arowana" attacks and destroys "Arowana" (Riley: 2300 → 400 LP).

Turn 6: Riley
Riley Normal Summons "C/C Critical Eye" (1400/1000). He then activates the Continuous Spell Card "Montage Fusion", allowing him to Fusion Summon a Fusion Monster in his Extra Deck as long as both him and his opponent control the required Fusion Material Monsters. Since Allie controls a WATER monster, he uses his "C/C Critical Eye" to Fusion Summon "C/C/C Water Sword of Battle" (2400/0). "Water Sword" attacks and destroys "Arowana", with its effect increasing its ATK by the ATK of all other WATER monsters on the field ("Water Sword" 2400 → 4400; Allie: 1900 → 0 LP).