"A Duel Personality", known as "Imperial Wrath Awakening" in the Japanese version, is the thirty-ninth episode of the Yu-Gi-Oh! ARC-V anime. It first aired in Japan on January 18, 2015 and in Australia on December 27, 2015. It became available with official subtitles via Crunchyroll on November 29, 2016.

Yuya's opponent is Iggy Arlo from the Bandit Warrior Academy in the second round of the Arc League Championship. Facing against Iggy who claims that victory is everything, Yuya tries to make his opponent smile with his Entertainment Duels. However, with his violent Dueling methods, Iggy forces Yuya to a corner. And then an abnormal change occurs before Yuya...

Duel is shown from an unspecified turn. Gong controls "Superheavy Samurai Warlord Susanowo" (2400/3800), while Trick controls no cards and has 400 LP. 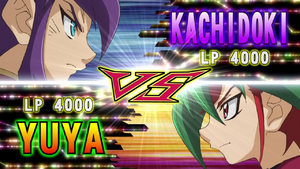 This Duel is conducted as an Action Duel, so at the start of the Duel the Field Spell Card "Bamboo Battleground" is activated. It will allow the players to use Action Cards, but they may only have one in their hand at a time.