"Danger Zones", known as "Sora Shiun'in, Storms Forth!!" in the Japanese version, is the forty-fourth episode of the Yu-Gi-Oh! ARC-V anime. It first aired in Japan on February 22, 2015 and in Australia on January 11, 2016. It became available with official subtitles via Crunchyroll on December 13, 2016

The Entertainment Duel between Zuzu and Dennis starts. On the other hand, Yuya meets Shay at the Ancient Ruins Area. As they exchange questions with each other, they are suddenly attacked by the Knights of the Duel Disks members and blasted away. Furthermore, a Duelist who had previously gone missing appears again in front of them. The destinies and mysteries behind everything starts to move once more. 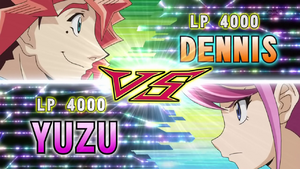 Turn 1: Dennis
Since there are no monsters on the field, Dennis Special Summons "Performage Stilts Launcher" (2200/0) from his hand in Attack Position via its own effect. Dennis Sets a card. He then activates "Pendulumstatue Yellow Scarab" (

10) in his left Pendulum Zone. Dennis activates its Pendulum Effect, increasing the ATK of all Spellcaster-Type monsters on the field by 300 ("Stilts Launcher": 2200 → 2500).

9) in her Pendulum Zones. Zuzu Pendulum Summons "Soprano the Melodious Songstress" (1400/1400) and "Tamtam the Melodious Diva" (1000/2000) from her hand in Attack Position. She then activates the effect of "Soprano", allowing her to Fusion Summon a Fusion Monster using "Soprano" and other monsters she controls and from her hand as Fusion Material Monsters. She fuses "Tam-tam" and "Soprano" to Fusion Summon "Bloom Diva the Melodious Choir" (1000/2000) in Attack Position. As "Tam-tam" was used as a Fusion Material, its effect reduces the ATK of "Bloom Diva" by 500 (1000 → 500) and then inflicts 500 damage to her opponent (Dennis: 4000 → 3500 LP). "Bloom Diva" attacks "Stilts Launcher". Its effect activates since it is battling a Special Summoned monster. "Stilts Launcher" is destroyed and Dennis takes the battle damage she would've taken (Dennis: 3500 → 1500 LP). Dennis finds and activates the Action Card "Flame Ball", which would inflict 200 damage to Yuzu. As a Spell Card was activated that would inflict damage to his opponent and he took effect damage this turn. He banishes "Stilts Launcher" from his Graveyard to make that damage equal to the highest effect damage he took this turn. As he took 2000 damage from the effect of "Bloom Diva", Yuzu receives the same amount of damage (Zuzu: 4000 → 2000 LP).[Notes 1] Yuzu activates the Continuous Spell Card "Slow Tempo", preventing any Normal Summoned or Set monsters from attacking during the turn they are Normal Summoned or Set.

Ashley vs. Bram vs. Carl[edit]

Ashley, Bram and Carl each control one "Slash the Assault Knight" (???/???) in Attack Position.

Carl's turn
"Slash the Assault Knight" attacks Ashley directly via its effect. Ashley activates the effect of his own "Slash the Assault Knight", reducing the battle damage to 0. In doing so, the attack hits Yuya and Shay, who are in the middle of them. The attack deals no Life Point damage to them, but physically harms them. In addition, they may not counterattack, as doing so would be interfering with a Duel that has already started, and thus would incur a 2000 Life Point penalty on them.

The Duel ends with no result when Obelisk Force arrives. Carl, Ashley and Bram subsequently lose to three members of Obelisk Force and are sealed into cards.

Olga and Halil vs. Reed Pepper[edit] 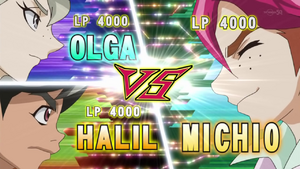 Olga and Halil vs. Reed