Yu-Gi-Oh! Duel Monsters 4: Battle of Great Duelist (☆☆デュエルモンスターズ  Yūgiō Dyueru Monsutāzu Fō: Batoru Obu Gureito Dyuerisuto) is a Japan-only Yu-Gi-Oh! video game for the Game Boy Color, and the fourth installment in the Duel Monsters series, preceded by Yu-Gi-Oh! Dark Duel Stories. It was released December 7, 2000 as three separate versions (Yugi Deck, Kaiba Deck, and Joey Deck), each being able to use only a certain selection of the 900 available cards.

Each of the god cards are usable after completing the game, but they can only be obtained from a different version by trading:

There are two debugging options, hidden from normal gameplay.

Each opponent in a stage must be defeated 5 times to unlock the next stage. After this, opponents can continue to be battled for more points and card drops.

The first stage is Domino Park. The second stage is the bridge underpass. The third stage, is the boss, Maximillion Pegasus. After defeating Pegasus five times, the player is given the password for the ending credits and an additional Dark Stage appears, with Mai Valentine as an opponent. The opponent for this stage can be changed with a password.

The secret stage can be unlocked by entering the password for one of its two characters. It is found by navigating left from the first stage. Like the Dark Stage, only one opponent will be available at a time and the opponent can be changed with a password.

The versus menu (Joey Deck)

Cards can be added to the player's chest in the password menu, by entering eight-digit passwords from OCG/TCG cards. There are a few non-card passwords used to unlock other features.

The debugging screens are unavailable during normal gameplay. They can be enabled by altering the ROM data. When enabled, their options are not visible on screen, but the player can access them by continuing to move the cursor past the campaign or trade options, which are normally the first and last options in the list.

The two debugging options are to play a sound or to view a screen.

Play sound: The user may enter a number to play a sound.

The player begins the game with a fixed Deck of 40 cards.

Each opponent has a different list of cards the player can get for beating them, with each card on the list having an assigned probability of randomly obtaining it. See Mako Tsunami (Duel Monsters 4) § Drops for example.

By entering 17232574 into the password menu, Solomon Muto will appear after each Duel to award the player a card.

Fusions are attempted during Duels by play a card from the hand on top of a monster on the field or hand. If successful, the two cards will merge into one.

The game does not use rules from the Yu-Gi-Oh! Official Card Game. It uses the rules from its predecessor Yu-Gi-Oh! Dark Duel Stories and makes a number of modifications and updates.

Although each game has cards that cannot be included in the Deck, some of those cards can still be used by acquiring them through temporary means. This is the only way of using "Thousand-eyes Rest" and the Ritual Monsters, which are otherwise unusable in all three games.

The player's initial Deck Volume is 1600. It can be altered using these methods, until it reaches the maximum of 9999.

12 is a special Level, used only by the Egyptian God cards. 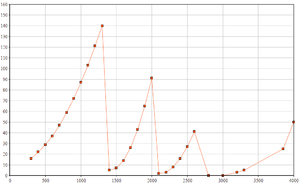 The vertical axis shows monsters' Deck Costs. The horizontal axis shows their maximum stat (whichever is higher out of ATK and DEF). Each drop in the graph corresponds to an increase in the number of Tributes required to Summon the card.

The Deck Cost of a Monster Card depends on the number of Tributes required to Summon it and is exponentially proportional to the whichever is higher out of its ATK and DEF.

Certain monsters intended to be Summoned by other means, such as Ritual Summon, are given a Deck Cost of 255 to discourage Summoning them normally.

The following cards are Limited, meaning only a single copy can be included in the player's Deck.

The game has three versions; Yugi Deck, Kaiba Deck and Joey Deck. The differences between each game include:

Each copy of the game came with three random promotional cards from a pool of five. Each of the three versions had a separate pool of five cards.

Each of the two guide books came with a promotional card.