At the beginning of your turn, you throw 3 dice with different icons, each dice corresponding to a monster. If you get two stars with the same level, you can summon a monster, unfolding the dice to create a path on the playing field. The goal of this game is to hit your opponent three times. 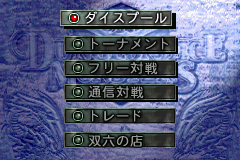 All these options can be chosen from the main menu:-

In the game the player must play many tournaments in order to beat the game, here are list of these tournaments listed in 3 Divisions