The chapter opens with Syrus Truesdale declaring an attack against an unseen opponent with his "Tankroid". His opponent is revealed on the next page to be Jaden Yuki, who has activated "Hero Barrier" to negate the attack against his "Elemental Hero Lady Heat". Syrus has 3700 Life Points, and Jaden has a full 4000. Syrus Sets a card to end his turn. Syrus knows he has to wint his duel to stay at Duel Academy, and Jaden knows that to - but if Jaden loses, his Deck will be confiscated, and he can't let that happen.

Flashbacks are shown to the previous day, revealing how it got to his point. Dr. Crowler arrives at the office of the teacher in charge of the Slifer Red first-years, Professor Hibiki. He's come to pick up the mid-term grade evaluations, but the other professor is nowhere to be found. Crowler then remembers that Hibiki has gone on a business trip until the next day, but finds the mid-term grades in the printer. He sees one student with a grade of zero. Elsewhere, at the school's computer lab, Jaden and Syrus are checking up Syrus' brother Zane on the computer. He's studying abroad at the American branch of Duel Academy, and the article says he's representing Duel Academy well. The picture shows him standing with "Cyber End Dragon" behind him. Bastion Misawa comments that Zane and Atticus Rhodes are the stars of the Academy, and is jealous that they get to study abroad. Jaden asks why Syrus refers to him as "big brother", when he already has a real big brother. Dr. Crowler arrives before he can answer, and states that he'd like to know how Syrus could be related to Zane, and decides to expel him, revealing that Syrus' midterm score was zero.

Crowler decides to give Syrus a chance to stay, and seeing as this is Duel Academy after all, he declares that Syrus will duel Jaden. Should Syrus win, he'll be allowed to stay. Bastion and Alexis are surprised, and think that Jaden could simply forfeit the duel. Knowing that's a possibility, Crowler states that should Jaden lose, his entire Deck will be confiscated, citing the fact that Jaden has failed every written exam he's taken since entering Duel Academy as the reason he can justify it. That night, Syrus cannot sleep, and sits on the porch of the Slifer dorm. He wants to stay at the academy to prove to his brother that he can be a duelist, as his brother once told him he was too kind of a person to get anywhere in the dueling world. Syrus informs Jaden that he wants him to duel him with all his skill. 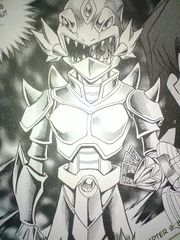 The duel resumes, and Jaden uses his "Elemental Hero Stratos" to attack and destroy "Tankroid". Syrus activates his face-down "Return Ticket", letting him Special Summon another "Tankroid" from his Deck, while the effect of the first activates, permitting him to draw one card. Jaden ends his turn, and Syrus begins his, drawing the card his brother gifted him with as a child - "Transformation". Syrus activates "Tune Up", increasing the attack of "Tankroid" by 300, and then uses it to attack and destroy "Lady Heat". Syrus Sets "Transformation" to end his turn. Jaden isn't having fun, but Syrus wanted him to duel with all his skill, so he activates the effect of "Stratos", which lets him attack Syrus directly with it by halving its attack points. However, Syrus remains unscathed, as he's activated "Transformation", which gives him armor resembling the "Blue-Eyes White Dragon". This has reduced the damage to zero and destroyed "Stratos".

Jaden's turn
Jaden Summons "Elemental Hero Stratos" (1800/300), and uses it to attack and destroy "Tankroid" (Syrus: 3700 → 3400). Syrus activates his face-down "Return Ticket", Special Summoning another "Tankroid" from his Deck in Attack Position, while the effect of the first "Tankroid" lets him draw a card.

Jaden's turn
Jaden activates the effect of "Stratos", halving its ATK and allowing it to attack Syrus directly. However, Syrus activates "Transformation", and equips it to himself, reducing the damage to zero and destroying "Stratos".