Jaden fuses "Winged Kuriboh" with "Light and Darkness Dragon" to create "Ma'at", which harnesses the power of the Millennium Items. Using the abilities of this monster and his own "Elemental Hero Terra Firma", Tragoedia is defeated. Years later, Jaden competes against his mentor Koyo Hibiki for the Pro League title.

Jaden has Summoned "Winged Kuriboh", which appears as white as it once did in Ancient Egypt. Syrus says that won't help - "Winged Kuriboh" can't do anything in this situation. Alexis questions why "Winged Kuriboh" is white now, and Tragoedia responds that its because he's been released from the seal. Chazz simply says Jaden's name, and Jaden remembers what Chazz had told him earlier. He activates Chazz's face-down "Hopeful Future". As his hand is at zero, he returns all cards in his Graveyard to his Deck, shuffles and draws two cards. Chazz reveals that all the cards in both their Graveyards will return to Jaden's Deck, and tells Jaden to show him his most powerful draws. Jaden draws "Polymerization" and Chazz's "Light and Darkness Dragon". Winged Kuriboh says "Kuri kuri kurii" and Jaden responds "Partner! I understand". He uses "Polymerization" to fuse "Winged Kuriboh" with "Light and Darkness Dragon". Syrus questions what the result of this fusion will be and Tragoedia appears amazed, simply saying "What?!". 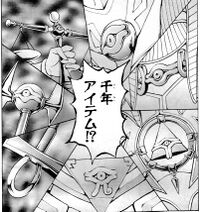 Tragoedia sees the Millennium Items on the body of "Ma'at".

"Ma'at" is Fusion Summoned in Attack Position. It holds all seven Millennium Items somewhere on its body, which seems to worry Tragoedia greatly. Jaden declares he's activating the effect of "Ma'at". He will declare what card he will draw next and then draw. If he is correct, he may activate the effect again. Alexis says there's no way he can possibly know what he'll draw. "Ma'at" appears to communicate with Jaden telepathically and informing Jaden of what he'll draw next via the Millennium Eye. Jaden declares "Mystical Space Typhoon". He draws it and plays it to destroy Tragoedia's "Ebon Sun". Next, he declares "Elemental Hero Ocean". He is correct, so "Ocean" is Special Summoned. Next, he declares "Elemental Hero Woodsman". He is correct again, and "Woodsman" is Special Summoned. He declares "Polymerization" as his fourth card, and is correct. He plays it, fusing "Woodsman" and "Ocean" to Fusion Summon "Elemental Hero Gaia" in Attack Position. Its effect activates, halving the ATK of Tragoedia's "The Supremacy Sun" and adding it that of "Gaia". Tragoedia curses the priests, realizing that "Ma'at" is lending Jaden its power. The priests had even hidden the power of the Millennium Items inside that spirit. He declares that he won't accept that which destroyed his brethren and that he will destroy the Millennium Items with his own hands. Jaden declares his next draw as "Miracle Fusion". As he reveals that its correct, Alexis states that she can't believe this is happening, while Midori says that despite that, its happening before their very eyes. Syrus states that Jaden's draws are the strongest.

Jaden plays "Miracle Fusion", removing the "Ocean" and "Woodsman" in his Graveyard from play to Fusion Summon "Elemental Hero Terra Firma" in Attack Position. Jaden draws once more via the effect of "Ma'at", but does not reveal the drawn card. He announces that the ATK and DEF of "Ma'at" are equal to the number of cards drawn via its effect times 1000. Therefore, it has 6000 ATK. Jaden activates the effect of "Terra Firma", Tributing "Gaia" and adding its ATK to that of "Terra Firma" - including the ATK "Gaia" itself took from "The Supremacy Sun". Alexis is flabbergasted - Jaden has two monsters - one with 6000 ATK and one with 6700. Jaden declares an attack with Earth Magma Slash using his 6700 ATK "Terra Firma". Tragoedia's Life Points drop to 2800 as he questions how a brat like Jaden could defeat him. Jaden tells him that they'll put an end to his destiny and "Ma'at" attacks directly, blasting Principal MacKenzie's body backwards. Syrus cheers that they've won, but Jaden tells him its not over yet. Tragoedia agrees as the shadow rises from MacKenzie's body and in its completed form once more. 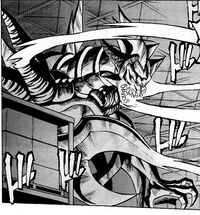 Tragoedia declares that he never thought he'd be on the losing end of a Shadow Duel, especially at the hands of the Millennium Items he so despises. He says that although he lost in the Shadow Duel, he will not disappear - it will be Jaden and Chazz who do so. Zane asks what that is, and Jaden says that Tragoedia sounds a bit desperate. He responds that tearing them to pieces will be an easy task, but stops, saying he's being absorbed. Winged Kuriboh is attempting to absorb him. This distracts him enough that he misses with the energy beam he fired from his mouth, as it goes right between Jaden and Chazz. Tragoedia declares that though he's damaged, he is in his complete form - a small spirit like Kuriboh will not be able to seal him. The spirit of "Light and Darkness Dragon" appears, and blasts a beam of light from its mouth at Tragoedia. Tragoedia is shocked to see the Feather of Ma'at again. He curses the spirits as Jaden comments that Winged Kuriboh is turning dark again. 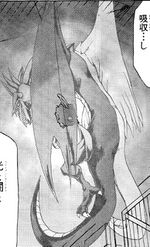 Winged Kuriboh and Light and Darkness Dragon become one and fade away.

Winged Kuriboh looks back at Jaden with a devastated look, communicating with him. Jaden asks why Kuriboh is so sad, and Jaden realizes what's about to happen. Tragoedia screams that he will not be sealed and Jaden starts to move towards Kuriboh. Chazz holds him back, telling him he must be strong too. The spirits are trying their hardest to seal Tragoedia, even at the cost of their own lives. They must simply stand and watch the result. Finally, Tragoedia is absorbed, and "Winged Kuriboh" and "Light and Darkness Dragon" become one and fade away, with Kuriboh casting one more look to Jaden in its final moment. At the hospital where Koyo has been, he opens his eyes, rises to his feet and puts on his glasses.

Jaden about to face Koyo for the world title after he graduates.

Years later, Chancellor Sheppard and Dr. Crowler watch the Pro League on TV from the former's office. Crowler says he never expected this to happen. The announcer asks who will stand at the top of the world of Duelists. He states that the man who vanished from the Dueling world for a few years has recovered and earned countless titles. Midori watches from her own office, excited that it will soon begin. The announcer declares that last year's world champion is here in America again tonight and will try to obtain that title again - and that his opponent is also Japanese - one of this year's many hopeful rookies. Alexis, Syrus and Bastion watch from the stands. Alexis and Bastion are both unsure who will win. Bastion comments that "he" should have done something about his clothes, with Alexis agreeing that its odd he's still dressed like that after graduation. Syrus responds that that's just like him, though. Adrian, James, Axel and Jesse are all in attendance. Principal MacKenzie stares out of the window in his office, finally free from Tragoedia after so many years. Aster and Zane stand together watching David through a window, while Reggie and Atticus sit together and watch the Duel on TV. As Jaden approaches the Duel field, he sees Chazz waiting for him in the hall. Jaden asks if the latter plans to watch from the entryway, with Chazz responding with a "hmph." Jaden tells him to watch his heroics from here and Chazz tells him the champion is already waiting. Jaden asks if this situation feels familiar, and Chazz tells him not to embarrass himself. Jaden responds with "Gotcha" and looks at his "Winged Kuriboh" card, telling his partner that its time to go. The announcer states that its finally time for the championship match. The two "Hero" users are at the Duel field - it will be the rookie Jaden Yuki against the world champion Koyo Hibiki. As Jaden approaches, Koyo tells him that they should have a fun Duel as they both arm their Duel Disks and yell "Duel!"

Turn 17: Jaden
Jaden activates Chazz's face-down "Hopeful Future". As he has no hand, he returns all cards in both his own and Chazz's Graveyards to his Deck and then draws two cards - "Polymerization" and "Light and Darkness Dragon". He plays the former card, fusing the latter with the "Winged Kuriboh" on his field to Fusion Summon "Ma'at" (?/?) in Attack Position. He activates the effect of "Ma'at" - he declares a card name and draws a card. If it is the card he declared, he may activate the effect again. He declares "Mystical Space Typhoon", which he draws. He activates it to destroy Tragoedia's "Ebon Sun". He declares he'll draw "Elemental Hero Ocean". He does so, and Special Summons it. He declares he'll draw "Elemental Hero Woodsman". He is correct and "Woodsman" is Special Summoned. He declares he'll draw "Polymerization". He does so and plays it to fuse "Woodsman" and Ocean", Fusion Summoning "Elemental Hero Gaia" (2200/2600) in Attack Position. The effect of "Gaia" activates, halving the ATK and DEF of Tragoedia's "The Supremacy Sun" and adding it to that of "Gaia" ("The Supremacy Sun" 2000/1500, "Gaia" 4200/4100). He declares he'll draw "Miracle Fusion". He does so, and removes the "Woodsman" and "Ocean" in his Graveyard from play to Fusion Summon "Elemental Hero Terra Firma" (2500/2000) in Attack Position. Jaden draws once more, but the card is not shown. The ATK and DEF of "Ma'at" become equal to the number of cards drawn via its effect x1000, so it has 6000 ATK. Jaden activates the effect of "Terra Firma", Tributing "Gaia" to add its ATK to that of "Terra Firma" ("Terra Firma" 6700/2000). "Terra Firma" attacks and destroys "The Supremacy Sun" (Tragoedia 7500 → 2800). "Ma'at" attacks directly (Tragoedia 2800 → 0).

The following cards were featured in this chapter. Cards in italics debuted here.