"Sad But Truesdale", known as "Sho VS Insect Girl! Insect Princess" in the Japanese version, is the fifty-sixth episode of the Yu-Gi-Oh! GX anime. It first aired in Japan on October 26, 2005 and in the United States on August 24, 2006.

Syrus Truesdale is offered a promotion to the Ra Yellow dorm should be able to defeat an Obelisk Blue student named Missy. However, this factors into Vice-Chancellor Bonaparte's plan of demolishing the Slifer Red dorm.

As Chazz Princeton will still be staying at the Slifer Red dorm, he used his family's money to build an add-on to it for him to occupy. It's the size of a small house by itself, and is complete with an indoor pool and two floors. Alexis Rhodes arrives and explains that she has moved out of the Obelisk Blue dorm, due to Dr. Crowler and her brother's urgings to make Alexis and Atticus a singing duo. Chazz gives the whole group a tour of his expansion and Alexis asks if she can stay here at the Slifer Red dorm. Chazz allows her to have the expansion and thus has to move back in with Jaden Yuki and Syrus Truesdale.

Bastion Misawa arrives and informs Syrus that Dr. Crowler has set up a Duel between him and an Obelisk Blue student, Missy. This is part of Crowler's plan to find the school a representative for the Pro League. Syrus was chosen as one of the duelists because of his brother's status. Should he win, he'll be promoted to Ra Yellow. If Missy wins, Dr. Crowler will let her advance to the Pro League, which she wishes to do because she in love with Zane. Syrus doesn't like the situation and runs away. Tyranno Hassleberry runs after him and sets him straight, telling Syrus to fight his fear. He persuades Syrus to take advantage of the opportunity he has, calling it Syrus' chance to "evolve". That night, as Syrus thinks about what Hassleberry said, He soon realizes his fear is that the others will move on as duelists and leave him behind. The next day, Syrus seals his "Power Bond" card in an envelope and hands it to Chazz, telling him to deliver it to Jaden. Syrus wins the Duel without "Power Bond" through "Super Vehicroid Jumbo Drill", thus advancing to Ra Yellow. However, he still opts to live at the Slifer Red dorm. 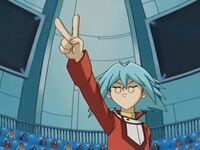 The English dub name for this episode is a reference to the phrase "Sad but true". 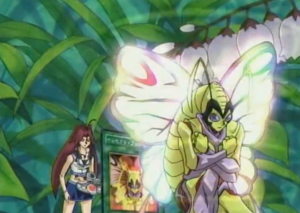