Aster Phoenix challenges Jaden Yuki to a rematch, to test the strength of their Hero Decks in battle, with Aster revealing new "Hero" monsters in his Deck, known as the "Destiny Heroes".

Aster Phoenix holds a press conference after his defeat of Zane Truesdale in the Pro League. He issues a challenge to Jaden Yuki, knowing that both of them play "Elemental Heroes". He states he'll be coming to Duel Academy tomorrow. Aster meets with his manager, Sartorius. Aster doesn't seem to have any real interest in dueling Jaden, but is doing so once more on Sartorius' advice. Aster arrives that night by skysurfing. Aster thwarts the escape of a man who was robbing Duel Academy's card shop. He appears to be looking for a certain card and when he does not find it, he tosses the man's cards causally on the ground. The Duel begins and Aster Summons "Elemental HERO Shining Phoenix Enforcer" while Jaden Summons "Elemental HERO Shining Flare Wingman". Aster uses a strange Field Spell Card called "Clock Tower Prison", which appears to turn its hands each turn and do nothing else. Aster plays "D - Time" and Special Summons "Destiny HERO - Doom Lord", a monster that no one in the crowd is familiar with. Its effect removes "Shining Flare Wingman" from play.

Turn 3: Aster
Aster's hand contains "Avian", "Burstinatrix", "Elemental HERO Sparkman", "D - Time", and "Destiny Signal". Aster draws "Polymerization" and subsequently activates it to fuse his own "Avian" and "Burstinatrix" together and Fusion Summon "Elemental HERO Phoenix Enforcer" (2100/1200) in Attack Position. "Phoenix Enforcer" attacks "Flame Wingman". Due to the former's effect, it can't be destroyed in battle, so only "Flame Wingman" is destroyed.

Turn 4: Jaden
Jaden draws "Elemental HERO Bubbleman" and subsequently Normal Summons it (800/1200) in Attack Position. Since Jaden Summoned "Bubbleman" while he had no other cards on his side of the field, its second effect activates, allowing Jaden to draw 2 cards.[Notes 1] Jaden then activates "The Warrior Returning Alive" to add "Avian" from his Graveyard to his hand. Jaden then activates "Polymerization" to fuse "Bubbleman" with "Elemental Hero Sparkman" and "Avian" in order to Fusion Summon "Elemental HERO Tempest" (2800/2800) in Attack Position. "Tempest" attacks "Phoenix Enforcer", but due to the latter's effect, it is not destroyed (Aster 3200 → 2500). 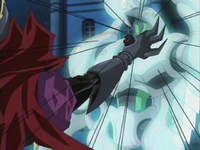 Turn 7: Aster
Aster draws "Clock Tower Prison" and subsequently activates it, destroying "Skyscraper". This card's effects will be revealed as the duel progresses. Aster then Normal Summons "Destiny HERO - Doom Lord" (600/800) in Attack Position. He then activates the effect of "Doom Lord" to remove "Shining Flare Wingman" from play for two turns, however Aster will not be allowed to declare an attack this turn.

In the original version, Aster prohibits spectators from watching his duel with Jaden because he is worried it will give his pro-league competitors insight into his deck. In the dub, Aster vainly refuses to duel for a crowd if he's not being paid. This is one of several changes made in the dub to make Aster into more of a villain.

When Aster's "Clayman" is destroyed, another one is shown in his hand.

In the dub, when Jaden is shuffling his Deck in the Ra Yellow dorm, "Balloon Lizard", "Black Luster Soldier - Envoy of the Beginning" and "Copycat" can be seen in it.