"A New Breed of a Hero, Part 2", known as "VS Edo (Second Part) - D-Hero of Destiny" in the Japanese version, is the fifty-ninth episode of the Yu-Gi-Oh! GX anime. 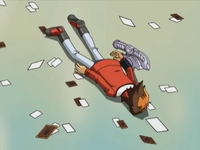 Jaden passes out after being defeated by Aster.

Aster explains his past: His father was a card designer for Industrial Illusions, who designed the "Destiny Heroes" himself. One day, Aster came home to find his father dead (kidnapped in the English version). The person who did it also took one of the "Destiny Hero" cards, which was known to be the most powerful among them. Aster's vigilante activity is centered around stopping crime to find the person who took his father from him, as he would be able to identify them by their possession of the stolen card. Jaden protests, saying that his father created the Destiny Heroes for fun, not for revenge. His "Dreadmaster" blocks the effect of Jaden's "Elemental Hero Thunder Giant" and wins Aster the Duel with its attack. Jaden falls to the ground, his cards flying about, and they turn blank as he falls.

Jaden has 2800 LP remaining and controls no cards.

Turn 9: Aster
Aster draws. During Aster's Standby Phase, he activates the effect of "Captain Tenacious" to revive "Doom Lord" (600/800) in Attack Position since it was destroyed in battle last turn. Aster Normal Summons "Destiny Hero - Diamond Dude" (1400/1600) in Attack Position. Aster then activates the effect of "Diamond Dude" to reveal the top card of his Deck. If that card is a Normal Spell Card, it will be sent to the Graveyard, and Aster can activate its effect on his next turn's Main Phase. He reveals "Misfortune", so the latter is sent to the Graveyard. "Diamond Dude" attacks and destroys "Wroughtweiler" (Jaden 2800 → 2200). Since "Wroughtweiler" was destroyed, its effect activates, allowing Jaden to add "Polymerization" and "Bubbleman" from his Graveyard to his hand. "Captain Tenacious" attacks directly (Jaden 2200 → 1400). Aster Sets a card.

Turn 10: Jaden
Jaden draws. During the Standby Phase, "Clock Tower Prison" gains a Clock Counter. It now has a total of two. Jaden then Normal Summons "Elemental Hero Bubbleman" (800/1200) in Attack Position. Since Jaden Summoned "Bubbleman" while he had no other cards on his side of the field, its second effect activates, allowing Jaden to draw two cards.[Notes 1] Jaden then activates "Bubble Blaster", equipping it to "Bubbleman" and increasing its ATK by 800 ("Bubbleman": 800 → 1600/1200). "Bubbleman" attacks "Captain Tenacious", but Aster activates his face-down "D - Shield", equipping it to "Captain Tenacious" and switching it to Defense Position. Due to the last effect of "D - Shield", "Captain Tenacious" can't be destroyed in battle.

Turn 15: Aster
Aster draws. During the Standby Phase, the final effect of "Destiny Hero - Doom Lord" activates, returning "Shining Flare Wingman" (2500 → 4000/2100) from the Removed from Play Zone in Attack Position. Through the effect of "Diamond Dude", Aster activates the effect of "Magical Stone Excavation", discarding "Fusion Sage" and "Terraforming" to add "Misfortune" from his Graveyard to his hand.[Notes 2]

Aster then activates "Misfortune" and targets "Shining Flare Wingman" for its effect, but Jaden activates his face-down "De-Fusion" and his face-down "Burial from a Different Dimension". The effects of the three activated Spell Cards activate in reverse order. "Burial from a Different Dimension" resolves first, allowing Jaden to return "Elemental Hero Flame Wingman" and "Elemental Hero Sparkman" from the Removed from Play Zone to the Graveyard. "De-Fusion" resolves next, returning "Shining Flare Wingman" to the Fusion Deck and reviving "Flame Wingman" (2100/1200) and "Sparkman" (1600/1400) in Attack Position. Since "Shining Flare Wingman" was removed from the field, "Misfortune" resolves with no effect.

Turn 16: Jaden
Jaden draws "Fusion Gate" and subsequently activates it, destroying "Clock Tower Prison". Now both players can Fusion Summon without using "Polymerization", but the Fusion Material Monsters will be removed from play instead of being sent to the Graveyard. Since "Clock Tower Prison" was destroyed while it had four Clock Counters, its final effect activates, allowing Aster to Special Summon "Destiny Hero - Dreadmaster" (?/?) from his Deck in Attack Position. Since "Dreadmaster" was Summoned, its first effect activates, destroying all of Aster's non-"Destiny Hero" monsters and Special Summoning Destiny Heroes "Doom Lord" (600/800) and "Captain Tenacious" (800/800) from the Graveyard in Attack Position. Due to the final effect of "Destiny Hero - Dreadmaster", its original ATK and DEF are both equal to the sum of the ATK of all other face-up "Destiny Hero" monsters Aster controls ("Dreadmaster": ? → 2800/? → 2800). 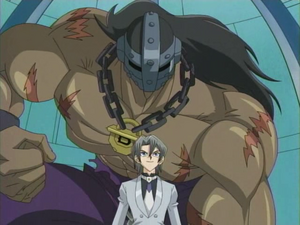 Jaden then uses the effect of "Fusion Gate" to fuse "Clayman" and "Sparkman" together and Fusion Summon "Elemental Hero Thunder Giant" (2400/1500) in Attack Position. Since "Thunder Giant" was Fusion Summoned, its effect activates, allowing Jaden to destroy "Diamond Dude",[Notes 3] but since "Destiny Hero - Dreadmaster" was Special Summoned via "Clock Tower Prison", none of Aster's face-up "Destiny Hero" monsters can be destroyed this turn and Aster takes no battle damage when they battle. 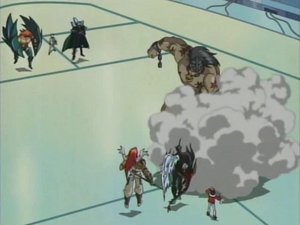 In the Japanese version, Aster's father is killed by the man who steals the card he made. Aster is actually shown to find his body on the floor, with the remaining "Destiny Heroes" scattered around him. In the English version, the body is not there, and Aster states his father was kidnapped.