Curry Worries, known as Kenzan VS Curry Devil! Spicy Duel is the sixty-third episode of the Yu-Gi-Oh! GX anime.

The Ra Yellow dorm head, Sartyr, begins a vendetta to bring his best students back to the dorm. Syrus Truesdale, Tyranno Hassleberry and Bastion Misawa have all been living at the Slifer Red dorm. He Duels Hassleberry, with the wager being that they will return to the Ra dorm should Sartyr win (Jean-Louis Bonaparte who is secretly watching the events unfold believes if Sartyr wins, destroying the Slifer Red dorm would be easier). He disguises himself and uses and an alias, luring them out with curry. Sartyr states he will only allow them to have curry if Hassleberry can beat him in a Duel.

Sartyr is quickly reduced to 200 Life Points by the fourth turn. At this point, his disguise falls off, but nobody recognizes him. Hassleberry then questions who is he and Sartyr introduces himself. Hassleberry asks why did he want them to go back to their dorm and Sartyr states it's because he believes that he was completely abandoned. The Ra Yellow dorm is almost completely empty as Sartyr's best students have already either graduated to Obelisk Blue or have chosen to stay at the Slifer Red dorm. Hassleberry states he won't abandon the Slifer Red dorm for Jaden's sake, so Sartyr decides to continue the Duel and bring back his students by force.

He then proceeds to Special Summon "Curry Fiend Roo" and reduce Hassleberry to 100 Life Points in a single turn. Hassleberry narrowly defeats him with "Tyranno Infinity". Sartyr believes he will remain alone forever, however Hassleberry reveals that they didn't leave because of him, they wanted to be closer to the Slifer Red dorm, so they could prevent it from being demolished. Bastion, Syrus, and Hassleberry agree to return to the Yellow dorm from time of time if Sartyr continues to cook curry.

All the students are having curry and find it delicious though Hassleberry, Alexis, and Syrus note they wish Jaden was here to have some curry.

Elsewhere, Jaden is still trying to find his way back to the Duel Academy building. He complains that he is hungry and wants some curry right now.

Turn 1: Don Simon
Don Simon draws "Curry Pot". He then Normal Summons "Carrotman" (800/900) in Defense Position. Don Simon then activates "Curry Pot". Now any monster sent to the Graveyard will be removed from play instead, which is visually represented by them going into the pot itself. 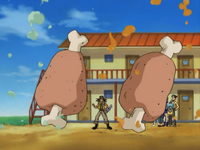 "Dark Tyranno" and "Dark Driceratops" being removed from play by "Curry Pot". 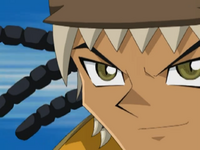 Hassleberry shows his wild side as he Summons "Tyranno Infinity".

In the Japanese version, Sartyr's alias was "Curry Mask", while in the English version it was "Don Simon".

In the English dub, when Hassleberry and Saryr begin their opening remarks before the Duel begins, Sartyr says, "And should you lose, well then, it's no soup for you!" which is a likely reference to the infamous quote of the Soup Nazi.