With the belief of recruiting more students for the Society of Light, Aster Phoenix returns to Duel Academy to challenge Alexis Rhodes, only to find that he'll be Dueling for the fate of the Slifer Red Dorm. However, Jaden Yuki makes a sudden and surprise return, and volunteers to be Aster's opponent in Alexis' place.

Alexis Rhodes is set to Duel Aster Phoenix. The fate of the Slifer Red dorm hangs in the balance. If Aster wins, then it will be demolished. If Alexis wins the dorm remains. Vice-Chancellor Bonaparte is confident that Aster will win, being a Pro League Duelist. Aster is slightly confused, however. He had met Chazz Princeton, prior to the Duel, who had assumed that Sartorius had sent Aster to help recruit more members for the Society of Light (in the dub he assumed he was there to defeat Jaden again). Aster has no clue what Chazz is talking about, despite Sartorius being his manager. Jaden Yuki finally makes it back to Duel Academy and is lead by a light into a cave. He meets another Neo Spacian there, and then hurries to the Academy. He takes Alexis' place in the Duel, and his rematch with Aster begins. Aster uses his "Destiny Heroes" again, and Jaden unveils Contact Fusion, which the "Neo-Spacians" can use to fuse with "Elemental Hero Neos" without "Polymerization". However, even he was unaware that this results in the Fusion Monster returning to the Fusion Deck at the End Phase, and is reduced to 200 Life Points via direct attacks as a result. Aster is confident he will win since Jaden has no clue on how to use his new cards, but Jaden refuses to give up and the dorm's fate hangs in Jaden's hands.

Turn 1: Aster
Aster draws "Destiny Hero - Diamond Dude" and subsequently Normal Summons it (1400/1600) in Attack Position. He then activates the effect of "Diamond Dude" to reveal the top card of his Deck. If that card is a Normal Spell Card, it will be sent to the Graveyard, and Aster can activate its effect on his next turn's Main Phase. He reveals "Graceful Charity", so it is sent to the Graveyard.

Turn 2: Jaden
Jaden draws "Neo-Spacian Aqua Dolphin" and subsequently Normal Summons it (600/800) in Attack Position. He then activates "Fake Hero" to Special Summon "Elemental Hero Bladedge" (2600/1800) in Attack Position, however it won't be allowed to attack this turn. Jaden then activates "Aqua Dolphin's" effect to discard "Hero Kid", look at Aster's hand, and choose a monster in it. If that monster has less ATK than a monster Jaden controls, that monster will be destroyed and Aster will take 500 damage. Jaden chooses "Destiny Hero - Captain Tenacious" (800/800) and it is subsequently destroyed (Aster 4000 → 3500). Jaden then Sets two cards. During the End Phase, "Bladedge" returns to Jaden's hand due to "Fake Hero".

Turn 3: Aster
Aster draws. Through the effect of "Destiny Hero - Diamond Dude", Aster activates the effect of "Graceful Charity" from his Graveyard, drawing three cards and discarding two ("Destiny Hero - Doom Lord" and "Ring of Magnetism"). Aster then activates "Mausoleum of the Emperor". Now both players can Normal Summon monsters without Tributing by paying 500 Life Points times the number of monsters needed to Tribute Summon that monster(s).[Notes 1]

Aster uses the effect of "Mausoleum of the Emperor" to pay 1000 Life Points (Aster 3500 → 2500) and Normal Summon "Destiny Hero - Dreadmaster" (?/?) in Attack Position without Tributing. Since "Destiny Hero - Dreadmaster" was summoned, its first effect activates, allowing Aster to Special Summon "Captain Tenacious" (800/800) and "Doom Lord" (600/800) from his Graveyard in Attack Position.[Notes 2] Due to the last effect of "Dreadmaster", its ATK and DEF are equal to the combined original ATK of all other Destiny Heroes that Aster controls ("Dreadmaster": ? → 2800/? → 2800) . "Dreadmaster" attacks "Aqua Dolphin", but Jaden activates his face-down "Negate Attack" to negate the attack and end Aster's Battle Phase.

Turn 4: Jaden
Jaden draws "Elemental Hero Neos". He then uses the effect of "Mausoleum of the Emperor" to pay 1000 Life Points (Jaden 4000 → 3000) and Normal Summon "Elemental Hero Neos" (2500/2000) in Attack Position without Tributing. Jaden then Contact Fuses "Neos" with "Aqua Dolphin" in order to Special Summon "Elemental Hero Aqua Neos" (2500/2000) in Attack Position. He then activates the effect of "Aqua Neos" to discard "Bladedge" and destroy two random cards in Aster's hand.[Notes 3] 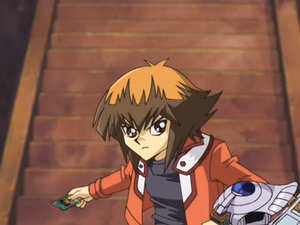 Jaden draws "Mausoleum of the Emperor".