"Happily Never After", known as "Yomi Frog! Alive Frog! Death Frog!" in the Japanese version is the seventy-fourth episode of the Yu-Gi-Oh! GX anime. It first aired in Japan on March 1, 2006 and in the United States on October 12, 2006.

As Duel Academy plans for an upcoming field trip, the Society of Light is gaining strength rapidly, with most of the Obelisk Blue and Ra Yellow students having been converted. Meanwhile, Jaden Yuki faces off against Princess Rose, an enforcer sent by Sartorius, with the victor choosing the destination of the field trip. 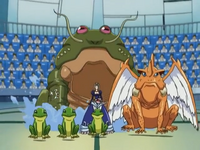 Sartorius, posing as a new student, is welcomed in the Obelisk White dorm by the Society of Light. Jaden Yuki, Syrus Truesdale, Bastion Misawa and Hassleberry observe this from outside, and agree he must be stopped.

Duel Academy's field trip day is approaching, and Dr. Crowler and Vice-Chancellor Bonaparte argue about where they will take the students. Sartorius and the large contingent of Obelisk Blue students that Chazz Princeton converted to the Society of Light enter the room. Sartorius wants to pick where they go, and he has most of the student population backing up his choice. Jaden Yuki enters the office while accompanied by Hassleberry, Bastion and Syrus. Jaden states he also has a place to recommend for the school trip, but the Society members order him to get lost until he is smart enough to join them. Jaden states he also has the right of choosing as he is currently the #1 student in the school. It's determined that Jaden will Duel a Society member, with the winner being permitted to choose the trip destination (Sartorius also mentions if Jaden loses then he has to promise to join the Society of Light). Sartorius chooses Princess Rose to represent the Society of Light.

She claims she can see Duel Spirits and that hers are three frog princes, referencing well-known fairy tales. Jaden ultimately wins the Duel, and announces that the field trip will be to Domino City, the site of the Battle City tournament.

Rose then activates "De-Fusion" to send "D.3.S. Frog" to the Graveyard and Special Summon her three "Des Frogs" from her Graveyard (1900/0 each) in Attack Position. [Notes 2] One "Des Frog" attacks "Elemental Hero Avian", but Jaden activates his face-down "Hero Ring" and equips it to "Elemental Hero Avian". Due to the effect of "Hero Ring", "Avian" can't be attacked by monsters with 1900 or more ATK, so the attack made by the attacking "Des Frog" is nullified.