Jaden Yuki continues his Duel with Mr. Stein, and the latter reveals more of his motives and past history.

Alexis is still trapped in a room by herself, and it's filling up with water quickly. Jim and Shirley manage to finally scare off the tiger that had attacked them, after Jim Summons "Flint Cragger" to intimidate it further.

Meanwhile, Jaden's Duel with Mr. Stein continues. If Jaden wins, he'll be able to get to where Thelonious Viper is hiding. Jaden questions Stein why he's doing this and Stein reveals his past. He had previously been a Duelist in the Pro League and was skilled enough that the was eventually able to challenge The D for the world championship. However, he was also attempting to get his teaching degree, and was thus taking classes at night. This left him exhausted and his Duel with The D was never finished. Due to his health issues, he retired, and got a job at Duel Academy, devoting himself to teaching the next generation of Duelists.

Elsewhere, Jesse and Syrus make a break for the elevator. Jesse explains when the power died, the elevator died with it. This frightens Syrus and causes him to panic, leaving Jesse to scan the area for trouble. From a distance, he hears Jaden Dueling and sets off after him, trailed by Syrus.

Meanwhile Stein reiterates that he blames Jaden for influencing other students into lethargy, and states that it doesn't matter if Jaden didn't do it intentionally - it simply makes it worse because he never realized the effect he was having on others. Stein tells Jaden that it wouldn't matter if he wasn't so talented - but he's a role model for other students. He defeated the Sacred Beasts and The Light of Destruction and other students wish to emulate him. Because Jaden also skips or sleeps through classes, other students believe they can do the same and still be just as good a Duelist as Jaden is. However, Stein says that other students don't have Jaden's "natural ability". He says that the last student to stop attending his classes was Alexis.

Viper later interrupts the Duel, appearing via a hologram. He shows Jaden the room where Alexis will soon drown. He informs Jaden that if Stein's Life Points reach 0, the room will completely fill up with water. Stein was unaware of this, and questions Viper about it. Viper responds with a clip of Alexis stating she doesn't enjoy Stein's classes either. This spurs him to continue the Duel.

Stein Summons "Scar-Knight", which is revealed in flashbacks to be the original form of "Scab Scarknight". It transformed when Stein's outlook on life began to collapse, and it morphed along with Stein's views. "Scar-Knight" is shown to be Stein's most beloved card, and a montage of his Duels during his days in the Pro League is shown, with Stein using the card to defeat many opponents. In addition, this card is also his Spirit partner. Stein appears to have the ability to see his own spirit, but not those of others.

Jim and Hassleberry have been searching for Alexis, and Shirley points them in the right direction. She demolishes a wall underwater and this allows Jim to swim into the room and rescue Alexis. This allows Jaden to continue the Duel, and he ultimately defeats Stein when the latter attempts to end the Duel in a Draw. Unfortunately, Mr. Stein's Bio-Band causes him to collapse and plunge into the abyss below when he attempts to pick up his "Scar-Knight" card.

Jaden has 2000 Life Points remaining and controls one set card.

Turn 5: Stein
Mr. Stein draws. "Elemental Hero Burstinatrix" attacks directly, but Jaden activates his face-down "Negate Attack" to negate the attack and end the Battle Phase. Mr. Stein then activates "Scab Blast" to inflict 200 damage to Jaden for every monster he controls that has a Scab Counter. Mr. Stein currently has two (Jaden 2000 → 1600).

Turn 9: Stein
Mr. Stein skips his Draw Phase to add "Scab Blast" from his Graveyard to his hand. He then switches "Scab Scarknight" to Attack Position. "Sparkman" attacks directly, but Jaden activates his face-down "A Hero Emerges" to make Stein randomly picks a card in Jaden's hand. If the card he picks is a monster, Jaden can Special Summon it. Mr. Stein picks a card and Jaden reveals "Elemental Hero Neos", so Jaden Special Summons "Neos" (2500/2000) in Attack Position. A replay occurs and Mr. Stein chooses not to attack. Mr. Stein then activates "Scab Blast" (Jaden 600 → 400). 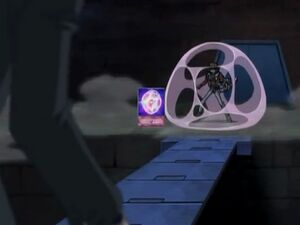 Jaden protected by the effect of "Cocoon Veil".

Turn 11: Stein
Mr. Stein draws. On Mr. Stein's End Phase, he activates the effect of "Scar-Knight" to destroy all monsters on the field and inflict 500 damage to both players for each monster destroyed. Jaden then activates his face-down "Cocoon Veil" to Tribute "Chrysalis Larva" and reduce the damage he would take to 0. Three monsters are destroyed by the effect of "Scar-Knight" (Stein 200 → 0).