Jaden Yuki and friends end up in a different alternate dimension, and Jaden finds himself in a lethal Duel against an oppressive Duel Spirit. 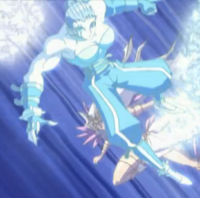 As Bastion Misawa had feared, the portal has not led to the dimension they were previously in, but a different one entirely. Jaden Yuki immediately runs off on his own, desperate to rescue Jesse Anderson. Axel Brodie chases after him, and Bastion ends up falling through weak ground and ends up with Jaden too. They also meet up with Tania, who explains that some sort of anomaly showed up her own dimension and she ended up in this one. She reveals that many of the weaker Duel Spirits have been enslaved by a group of mid-level Winged Beast monsters, led by Sky Scout. Axel develops a plan to take out their main power supply, as they would be disoriented in the dark. Jaden rushes in to challenge Sky Scout.

However, Jaden is unaware of the possible consequences of this. Tania reveals that in this dimension, players take real damage. Losing a Duel actually results in death (in the dub, this is changed to "sent to the stars", but it's still heavily implied that term is euphemism for death). Tania gets Jaden's attention as the Duel begins and reveals this. Jaden is shocked, while Sky Scout is surprised that rumors of there being a dimension where Duel Monsters is not life-or-death are true. Sky Scout states that in this dimension, the only people who have Duel Disks are those willing to risk their lives. A Duel cannot be stopped once both Duel Disks are activated, and so Jaden must Duel.

Sky Scout locks down Jaden's Summoning of high-level Fusion Monsters with "Level Tax" and dominates with the ATK and effect of "Simorgh, Bird of Divinity". Though Jaden is reduced to 100 Life Points, he wins by Summoning "Winged Kuriboh LV10". The Duel also distracts Sky Scout from his sentry duty, and allows Axel to shut down the main power generator, disorienting the remaining Winged Beasts and allowing the low-Level monsters to escape their slavers. Sky Scout is defeated by Jaden; he states he has no regrets and that the Duel showed his pride as a warrior, and tells Jaden that he must defeat the one who is the true cause of the war, being someone known as "The Supreme King" (in the Japanese version, Birdman tells Judai that Judai himself must become the Supreme King). He then fades away. Jaden meets up with the rest of his friends and they prepare to continue on. Bastion opts to stay with Tania, supposedly to attempt to find out more information about the dimensions.

Turn 1: Sky Scout
Sky Scout draws "Simorgh, Bird of Divinity". He then activates "Summon Storm" to pay 800 Life Points (Sky Scout 4000 → 3200) and Special Summon "Whirlwind Prodigy" (1500/1600) in Attack Position. Sky Scout then Tributes "Whirlwind Prodigy" in order to Tribute Summon "Simorgh, Bird of Divinity" (2700/1000) in Attack Position (as "Whirlwind Prodigy" counts as two Tributes for the Tribute Summon of a WIND monster). Sky Scout then sets a card and activates "Level Tax". Now as long as "Level Tax" is face-up, neither player can summon a Level 5 or above monster without paying Life Points equal to the ATK of the summoned monster. On Sky Scout's End Phase, the effect of "Simorgh, Bird of Divinity" activates, inflicting 1000 damage to both players, but Sky Scout takes no damage as he has at least two cards in his Spell & Trap Card Zone (Jaden 4000 → 3000).

Turn 3: Sky Scout
Sky Scout draws "Wing Requital". He then Normal Summons "Tornado Bird" (1100/1000) in Attack Position. Sky Scout then activates "Wing Requital" to pay 600 Life Points (Sky Scout 3200 → 2600) and draw one card for each Winged-Beast type monster on his side of the field, however the drawn cards can't be used this turn. Since Sky Scout has two Winged-Beast type monsters on his side of the field, he draws two cards.

Turn 4: Jaden
Jaden draws "Graceful Charity" and subsequently activates it to draw three cards and discard two cards ("Elemental Hero Burstinatrix" and "Elemental Hero Necroshade"). Jaden then Normal Summons "Neo-Spacian Grand Mole" (900/300) in Attack Position. "Grand Mole" attacks "Simorgh, Bird of Divinity" with Jaden intending to activate the effect of "Grand Mole" and return to "Simorgh" to Sky Scout's hand, however Sky Scout activates his face-down "Glory Level Talisman" and equips the latter to "Simorgh, Bird of Divinity". Due to the second effect of "Glory Level Talisman", "Grand Mole" is destroyed as its Level was lower than the Level of "Simorgh".

Sky Scout then activates his face-down "Icarus Attack" to Tribute "Tornado Bird" and destroy two of Jaden's Set cards ("Polymerization" and "Fake Hero"). Sky Scout then activates his face-down "Explosion Wing" to inflict 500 damage to Jaden for each of his cards that were destroyed this turn by a card effect. Three cards were destroyed by an effect (Jaden 1900 → 400). Jaden then Sets two cards. On Jaden's End Phase, the effect of "Simorgh, Bird of Divinity" activates, but neither player takes any damage.