"Friend or Fiend", known as "Judai VS Scarr, Scout of Dark World" in the Japanese version, is the one hundred and thirty-third episode of the Yu-Gi-Oh! GX anime. It first aired in Japan on April 25, 2007 and in the US on December 27, 2007.

To protect a small boy, Jaden Duels Scarr and learns more about the state of the world that they've entered in the process.

Jaden Yuki's group leave the lair of the Winged Beasts and proceeds onward. They end up in an abandoned, mostly destroyed town. A comet is seen in the sky, and this seems to adversely affect Jim Crocodile Cook, though he claims that light just hurt his eyes. As they witness a young boy run out of a building, Jaden again impulsively runs after him without thinking. The boy is cornered by Scarr, Scout of Dark World, who attempts to kill him with some sort of bladed ranged weapon. Jaden volunteers to Duel Scarr in order to save the boy's life. Tyranno Hassleberry asks to Duel him instead, but Jaden orders him back. Jaden is hesitant to let anyone else Duel, as he fears they would lose and thus die (the dub changes this to "sent to the stars", though death is still heavily implied).

Jaden defeats Scarr in two turns. Sir Freed, leader of the Steel Knight Army appears and scolds the boy, Kyle, for running off alone. They hear more figures approaching and Freed urges them to follow him back to the sanctuary, before more of the Dark World Army arrives. At the sanctuary, contained in a hidden cave, Kyle introduces Jaden's group to his sister, who then reveals that they are from yet another alternate dimension, and were recently dragged into this one. She reveals that the Dark World Army appears in the legends and folklore of their dimension, but here, they actually exist. 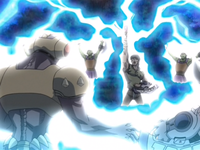 An army of knights led by Freed opposed them, but all of them save Freed himself were either captured or killed, leaving only a small group of women, children and the elderly. Jaden questions whether anyone present has seen Jesse Anderson, but no one has. When they decide to leave, Freed requests that they stay until the light of the comet fades, as at that time the Dark World monsters sleep. If they were to leave now, it would compromise the location of Freed's sanctuary. At the village, Zure, Knight of Dark World, receives a report from his troops that a prisoner has escaped. The prisoner is chased by members of the Dark World Army, who attempt to Summon "Emissary of the Afterlife" to stop him. The prisoner plays "Justi-Break", defeating the monsters. He reaches Freed's sanctuary, where it's revealed he is Kyle's father, Rahz. He says the prison camp is located under a cliff near the village, and their comrades still live. When questioned by Jaden, he also claims that was someone there that resembled Jesse. However, his wounds are too great, and Rahz dies. Jaden states he'll save Jesse and Freed's people.

Turn 1: Scarr
Scarr draws "Archfiend Soldier" and subsequently Normal Summons it (1900/1500) in Attack Position. He then Sets a card.

Scarr activates his face-down "Fake Friendship Treaty". Now Jaden is forbidden from summoning any monsters that are Level 4 or below. If one of Scarr's monsters attack or Jaden takes damage from a card effect controlled by Scarr, "Fake Friendship Treaty" will be destroyed. Scarr then activates "Hurricane Nest". Now if Jaden Special Summons a monster while "Hurricane Nest" is face-up, Scarr can send one "Special Hurricane" from his hand or Deck to the Graveyard to destroy the Special Summoned monster.