"The Darkness Revealed", known as "Supreme King Descends - The Duelists of Death" in the Japanese version, is the one hundred and thirty-eighth episode of the Yu-Gi-Oh! GX anime. It first aired in Japan on May 30, 2007 and in the US on February 8, 2008.

Jim and Axel join the resistance against the forces of The Supreme King, this dimension's new tyrant. Attempting to storm his castle, they find a low-ranking scientist instead, who Jim defeats. They then learn the true identity of The Supreme King, which shocks both of them to their cores. 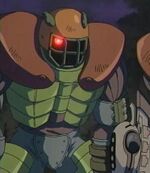 Axel Brodie and Jim Crocodile Cook, dressed in cloaks, enter a cave and find an elderly man and his young grandson, Nero. Jim shows them a picture of Jaden Yuki and asks if they have seen him. They say they haven't, and ask if he's a Duelist. When Jim responds that he is, the old man suggests that he's already dead, as anyone with a Duel Disk in this area has been killed by The Supreme King's Army. Two Duel Spirits of "Battle Footballer" enter the cave and state that if any hidden Duelists don't reveal themselves, they will take away everyone present. Jim and Axel step in to Duel them.

Outside a tall spire made of rock, an army forms and chants "Supreme King" in unison over and over again (in the dub, the army chants "He is the power" over and over again), appearing to nearly worship their master. In the top room of the spire, five Duel Spirits report to their King. Chaos Sorcerer states that they've taken over the Eastern sector and Guardian Baou reveals that the North sector has also fallen. Skull Knight claims that the West will soon fall, while Skilled Dark Magician and Skilled White Magician say that only the Southern quadrant remains free.

Jim and Axel easily defeat the Battle Footballers, though the Duel isn't actually shown. The old man explains that the Supreme King appeared in this world suddenly, and is attempting to rule over it as a tyrant, having Duelists arrested and brought to his keep, from which no one returns alive. Axel and Jim question whether Jaden could have been captured by the King, since his current mental state could very well affect his Dueling skills. It's revealed that after Jim and Axel left Jaden in the previous episode, Jim returned and attempted to convince Jaden that the deaths of his friends was not his fault. He states Jaden would not respond and it was as if "his soul left him".

The comet appears in the sky once more, which had previously affected Jim in a negative way. A flashback now ensues, and shows a much younger Jim walking through a forest. He finds numerous bear traps simply lying around and Shirley nearly walks right into one. To prevent her from doing so, Jim tackles her, and they end up plunging off a cliff over a waterfall. In the present, Jim states he wants to save Jaden no matter what, and the next scene shows he, Axel, the old man, and his grandson aboard an unnamed fossil car, heading towards the old man's village.

At the village, foot soldiers of the Supreme King are attacking it, the Duel Spirits of "Abaki", "Blast Asmodian" and "Mechanicalchaser". The Duel Spirit of "Total Defense Shogun", appears and attempts to destroy them. Jim and the others arrive and Jim jumps off to help, and is nearly killed by the Total Defense Shogun, who calls himself Burgundy. The old man intervenes, stating that Jim and Axel are new allies. However, Burgundy reacts too quickly and ends up hitting Jim anyway, though the blow only appears to knock him out. Jim remembers when he first arrived at Duel Academy and found Jaden, Syrus Truesdale and Tyranno Hassleberry attempting to feed Shirley. Jim states she won't accept food from anyone but him, but Jaden proves him wrong, successfully feeding her without getting his arm ripped off. 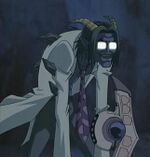 Kozaky, head researcher for the army of The Supreme King.

Jim awakens in a hut, and is greeted by the Duel Spirit of "Spirit of the Harp", who calls herself Claret. Burgundy enters and apologizes to Jim, stating he thought he was with The Supreme King. Burgundy states that no one ever returns from the Supreme King's keep alive, and suggests they stay here in the village, as for now it's safe, and they would be valuable allies to help defend it if it's attacked. They opt to leave, intent on reaching the Supreme King's keep and rescuing Jaden. Upon arriving, they find it deserted, and see numerous Duel Disks burning in pits of lava. The only remaining resident of the castle is Kozaky, who reveals himself as a researcher of the Supreme King's army. He states that all the captured Duelists are dead, sacrificed to enable the completion of "The Ultimate Card". Kozaky also reveals that The Supreme King and the rest of the army have left this castle and proceeded south to launch an all-out attack on the last free area of the dimension.

Kozaky doesn't allow them to leave, and though Jim believes it be a waste of time, he Duels Kozaky. Though Kozaky summons three monsters and nearly wipes out Jim's Life Points on his first turn, Jim still easily wins on his second turn by Summoning "Fossil Machine Skull Convoy". They leave, and see Burgundy's village burning, the attack having already come to fruition. They see Nero's Duel Disk on the ground, cracked, and Burgundy limp out of the village, urging them to flee, as they are no match for the Supreme King. Burgundy then fades away. Jim runs after the army and challenges The Supreme King to a Duel. He accepts, and takes off this helmet's visor - revealing that The Supreme King is none other than Jaden himself.

Due to the first effect of "Skull Convoy", it can attack up to three times during each Battle Phase while Kozaky controls at least one monster. "Fossil Machine Skull Convoy" attacks and destroys the two "Chaosrider Gustaph" and "Dokurorider" (Kozaky 4000 → 3900 → 3200 → 3000). Since "Fossil Machine Skull Convoy" destroyed a monster by battle and sent to the Graveyard, its second effect activates, inflicting 1000 damage to Kozaky for each monster destroyed this way. Three were destroyed this way (Kozaky 3000 → 0).