"What Lies Beneath, Part 1", known as "The Supreme King of Terror! The Wandering O'Brien" in the Japanese version, is the one hundred and forty-first episode of the Yu-Gi-Oh! GX anime. It first aired in Japan on June 20, 2007 and in the US on April 26, 2008.

Zane and Aster interrogate and defeat members of the The Supreme King's forces, while Axel wanders, struggling with his cowardice before The King, and doubting himself severely.

At a secluded mansion, the Goblin Elite Attack Force arrives, searching for more Duelists to defeat for the Supreme King. The door is answered by Aster Phoenix, who asks what they want. They respond they are subordinates of Skull Knight and question whether Aster is a Duelist. He responds in the negative, claiming to be a servant of the house's master. The Goblins enter, stating that they need to search the place, as someone in this vicinity has been causing members of the Supreme King's Army to disappear. Aster leads the Goblin captain into the next room, but leaves, locking the door behind him and trapping the goblin inside. He is met by Zane Truesdale, who claims he's entered his Cyber Style dojo. He activates his Duel Disk and challenges the goblin. 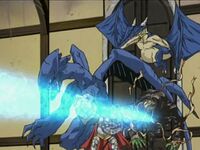 Aster returns to the front door, where another member of the Goblin Force is questioning what's taking so long. Aster says the goblin's boss had something to discuss with his master, and suggests the goblin relaxes. However, he hears his leader scream, and Aster responds by activating his own Duel Disk to defeat the goblin. Zane is then shown using his three "Cyber Dragons" to destroy the goblin's "Luster Dragon", "Spear Dragon" and "Return Zombie" and then he fuses them with "Polymerization" to Fusion Summon "Cyber End Dragon". The goblin begs for Zane to spare his life, and Zane begins interrogating him. He asks if it's true that The Supreme King is really Jaden Yuki. The goblin says yes, but Zane asks for proof. The goblin claims he had once been requested to bring the King his Duel Disk, and as he was doing so, a card fell out of it - "Elemental Hero Neos".

Back out front, Aster has "Destiny Hero - Doom Lord", "Destiny Hero - Captain Tenacious", "Destiny Hero - Diamond Dude" and "Destiny Hero - Plasma" out on the field. The goblin's field is bare, and he begs for his life. Aster questions what the King's next move will be. The goblin responds that he plans to invade the southern portion of the dimension, to flush rebels out of hiding and put them in a prison camp west of their current location. Aster and Zane both opt to defeat their opponents, claiming they can't spare them because they are dark heroes.

Having witnessed the defeat of Jim Crocodile Cook at the hands of The Supreme King, Axel Brodie is sleeping, having nightmares of being killed by the King's forces. He wakes up and leaves his hiding place - a destroyed village, leaving his Duel Disk behind. He passes Syrus Truesdale and Ojama Yellow as he's leaving, but does not notice them. The other members of the Goblin Elite Attack Force appear, chasing down Maiden of the Aqua. Syrus leads her a safe hiding place as the King's forces pass. She is accompanied by Dancing Fairy, who Ojama Yellow is instantly smitten with. The Maiden asks if Syrus is a Duelist who could oppose The Supreme King, and he responds in the negative, but points her in the direction of Axel. She meets with him, but Axel states that no one can oppose the Supreme King. 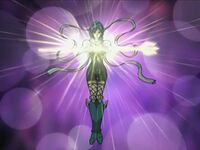 Maiden of the Aqua casts a spell, covering the area in water, which mirrors her card's effect of treating the Field as "Umi".

As he continues on, Axel witnesses more members of the Goblin Elite Attack Force release a pack of flaming, wolf-like monsters to track down refugees. They attack the Maiden and the fairies, and Axel intervenes, but is unable to do much without his Duel Disk. The Maiden has it in her possession, as Syrus had picked it up and given to her with instructions to return it to Axel when the time was right. However, any cards fired have no effect on the wolves, as they are the same Attribute as Axel's cards, which he realizes after firing several "Volcanic Shells". The Maiden activates her ability, filling the surrounding area with water. This lets Axel fire three copies of the "Anchor Bind" card to tie up the wolves, sending them plunging into the water. The Maiden tries to convince Axel to fight The Supreme King, but Axel cannot bring himself to do so. She departs, and Axel meets up with Syrus, who states that since Jaden betrayed them, he's taken the role of an observer, but has tried to influence events from behind the scenes.

Meanwhile, Zane and Aster reach the prison camp, and Summon "Cyber End Dragon" and "Destiny Hero - Plasma" respectively. Axel journeys to what appears to be the last village free from the Supreme King's influence, inhabited by both humans and Duel Spirits. He witnesses the few soldiers they have left stealing food from the villagers who cannot fight. Then, Guardian of the Labyrinth and Ancient Brain appear, claiming they are taking over. The Guardian's shield does most of the talking, with he himself only responding to it by stating "exactly." Later, Ancient Brain turns to leave and report back to The Supreme King, telling Guardian of the Labyrinth to throw open the village's gates when the King's army arrives, calling the villagers stupid.

Axel is eavesdropping nearby, and Ancient Brain reveals his true form - Skull Knight, one of the five Duelists of Death. The shield states they can't let Axel warn the villagers as the "Guardian of the Labyrinth" Summons his sword, but Skull Knight tells both of them they don't need to worry about Axel telling the villagers about their plans as he previously fled the Supreme King when the latter asked if he was going to Duel him. Regardless of this, Axel challenges Skull Knight to a Duel and the latter accepts, thinking Axel will be easy prey.