"What Lies Beneath, Part 2", known as "The Victor is Righteous! The Supreme King VS O'Brien" in the Japanese version, is the one hundred and forty-second episode of the Yu-Gi-Oh! GX anime. It first aired in Japan on June 27, 2007 and in the US on May 3, 2008.

Axel plans an assault on The Supreme King's castle, and defeats Skull Knight in order to save one of the last remaining villages. Axel is backed up by Zane and Aster, who Duel the King's subordinates as Axel heads for the tower.

Axel Brodie begins his Duel with Skull Knight. Using "Magical Merchant", Skull Knight sends numerous Normal Monsters to the Graveyard and then Summons "Lycanthrope", whose effect does more damage for each such monster in the Graveyard. Axel is reduced to 100 Life Points by the end of Skull Knight's second turn. However, Axel defeats Skull Knight on his next turn, using a combination of "Volcanic Mine" and "Volcanic Doomfire". Skull Knight fades away, cursing Axel and claiming The Supreme King is invincible. In the Japanese version, he specifically tells Axel that he'll be waiting for him in Hell.

Axel captures Guardian of the Labyrinth (and its talking shield) and accepts the position of commander of the village's defenses. He instructs that the gates be immediately closed and for the village to assemble any and all Duelists present together. However, someone is already approaching the village, but it ends up being Zane Truesdale and Aster Phoenix leading a group of warriors they had freed from the prison camp, including "King's Knight", "Queen's Knight", "Jack's Knight" and "Warrior Lady of the Wasteland". Axel plans an immediate sneak attack on the Supreme King's castle, and Zane and Aster insist on accompanying him. They aim to find out what brought out such a sudden change in Jaden Yuki, and Aster speculates that if they can prove Jesse Anderson is still alive, they may be able to save Jaden from himself. Dancing Fairy offers to aide them by questioning everyone they can find on Jesse's status. 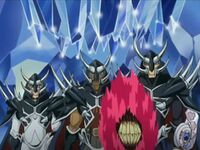 Axel, Zane and Aster dressed in the armor of "Dark Blade" as they attempt to infiltrate The Supreme King's keep.

At the Supreme King's keep, Chaos Sorcerer reports that they now have an army of several thousand, and will soon begin the assault on the village. Zane, Axel, Aster and the now-hostage "Guardian of the Labyrinth's shield use Zane's "Cyberdark Dragon" to fly near the castle. The trio is dressed in the armor of "Dark Blade" and their plan to masquerade as the members of the Supreme King's Army while the Guardian's shield guides them to the throne room. They encounter Chaos Sorcerer, who questions why they are not with the rest of the army. The Guardian's shield replies that they have a message from Skull Knight to deliver to The Supreme King. Chaos Sorcerer feigns believing them, but then attacks, stating that all of Skull Knight's orders go through him before they get to The Supreme King. Zane offers to Duel him, as Aster and Axel move on ahead, stating that he's had no real challenges since arriving in this dimension.

As they near the stairs, they are stopped by Skilled Dark Magician and Skilled White Magician. Aster Summons "Destiny Hero - Double Dude" and urges Axel to continue on while he Duels them. Axel reaches the throne room and The Supreme King questions why he returned. Axel says he's nowhere near him in terms of sheer power, but also says there are two kinds of power - the kind the King has, and the kind that courage provides. He fights for all the people who now need his power to survive - the same power that Jaden himself used to wield. The Duel begins, and The Supreme King gains an early lead, reducing Axel's Life Points to 2100 on his first turn.

Turn 1: Skull Knight
Skull Knight draws a monster and subsequently sets it. He then sets a card.

Turn 4: Axel
Axel draws "Volcanic Doomfire". He then sends "Tri-Blaze Accelerator" to the Graveyard in order to Special Summon "Volcanic Doomfire" (3000/1800) in Attack Position. Axel then activates his face-down "Volcanic Mine" to Special Summon a "Bomb Token" in all of Skull Knight's unoccupied Monster Card Zones. Skull Knight has four unoccupied Monster Card Zones, so four "Bomb Tokens" (1000/1000 each) are Summoned to Skull Knight's side of the field in Defense Position.

Axel Brodie vs. The Supreme King[edit]

Turn 1: Axel
Axel draws a card and subsequently sets it.

Turn 2: Supreme King
The Supreme King draws "Dark Fusion" and subsequently activates it to fuse "Elemental Hero Avian" with "Elemental Hero Wildheart" in order to Fusion Summon "Evil Hero Wild Cyclone" (1900/2300) in Attack Position. "Wild Cyclone" then attacks directly. Axel tries to activate his face-down card in response, but the Supreme King states that due to the first effect of "Wild Cyclone", Axel can't activate any Spell or Trap Cards when it attacks until the end of the Damage Step. The direct attack continues (Axel 4000 → 2100). Since "Wild Cyclone" inflicted battle damage, its second effect activates, destroying Axel's face-down "Firewall".