"The Forbidden Ritual, Part 1", known as "Activate! Ultimate Unsealing Ritual Technique" in the Japanese version, is the one hundred and forty-fourth episode of the Yu-Gi-Oh! GX anime. It first aired in Japan on July 11, 2007 and in the US on May 17, 2008.

As Jaden recovers, his small group of remaining companions continue on. Adrian reveals himself after a long absence and intends to sacrifice his childhood friend Echo to release the spirit of Exodia. Aster opposes him.

Jaden is freed from the influence of the The Supreme King, but at a great cost. His only remaining companions are Syrus, Ojama Yellow, Aster and Zane. Jaden is sleeping it off, and wakes up screaming as he remembers his Duels with Jim and Axel. He questions where they are, and realizes they are gone—defeated by his own hands. Aster tells him to calm down and reveals that Jesse is still alive, so Jaden needs to focus on locating and saving his friend. Jaden responds that at this point, he doesn't deserve to be anyone's friend. Jaden then passes out again (in the English Dub it is revealed that he has a high fever).

Elsewhere, Adrian Gecko is in a cave, holding the five Exodia cards he received from Marcel while the latter was still possessed by Yubel (the English dub still features the original Japanese cards, text and all). Adrian determines that he was will have to fight Yubel for control of this dimension and believes he can win if he unlocks Exodia's seal and makes it his servant. He also realizes that to break the seal, he needs a sacrifice. He reveals that Yubel's Devil Arm has been transplanted onto his own, as his current power is only a result of his deal with Yubel.

Aster thumbs through Jaden's Deck and sees the "Super Polymerization" card and is confused as to how it got there - as it was not there the last time he checked. Zane comments that he would have liked to Duel The Supreme King and explains that he came here seeking his ultimate opponent. Aster wants to help Jaden find Jesse, as Aster feels he is indebted to Jaden, since the latter aided in saving Aster's own friend—Sartorius. In the canyon below them, Dr. Crowler and Echo are being chased by a pack of "Abare Ushionis". They are saved when Zane and Aster Summon "Cyber Dragon" and "Destiny Hero - Diamond Dude" respectively. Crowler and Echo begin traveling with the rest of the group. 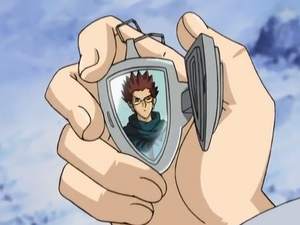 The picture of Adrian in Echo's locket.

That night, Aster returns a locket Echo had dropped to her - one with Adrian Gecko's picture. He questions whether she's here to save Adrian. She replies that she's not - she knows Adrian will rule this dimension, without his brother and the rest of his family to hold him back. A deep fog gathers, and the whole group is suddenly transported into a cave, where they meet Adrian, who reveals that he was not left behind in the other dimension - he chose to stay. Jaden questions whether he's seen Jesse, but Adrian replies he hasn't. He reveals that in order to become King, he needs to sacrifice Echo's life. Aster steps in, wishing to save Echo and challenges Adrian to a Duel.

The Duel begins, and Adrian's strategy seems to consist of playing defense and reinforcing his hand. Eventually, Aster realizes that he may be trying to complete Exodia, and blocks this strategy by playing "Force of Four". At this point, Adrian's hand consisted of four Exodia pieces and a Spell Card - and he had just moved the fifth piece to the top of his deck after his "Deep Diver" was destroyed. However, the Spell Card he discarded was "Ritual of the Ultimate Forbidden Lord", which lets him Special Summon "Exodios the Ultimate Forbidden Lord". However, he must sacrifice someone he loves in order to break the seal. Echo willingly steps forward to be sacrificed.

Turn 2: Aster
Aster draws "Destiny Hero - Diamond Dude" and subsequently Normal Summons it (1400/1600) in Attack Position. Aster then activates the effect of "Diamond Dude" to reveal the top card of his Deck. If the card is a Normal Spell Card, he can send it to the Graveyard and activate its effect during his next turn's Main Phase; if the card is not a Normal Spell Card, the card will go to the bottom of Aster's Deck. Aster reveals "Destiny Draw", so it is sent to the Graveyard. "Diamond Dude" attacks and destroys "Vortex Trooper". Since "Vortex Trooper" was destroyed, its second effect activates, letting Adrian draw a card. Aster sets two cards.

"Destiny Hero - Dunker" attacks and destroys "Deep Diver". "Disk Commander" and "Diamond Dude" attack directly (Adrian 3500 → 3200 → 1800). "Dreadmaster" attacks directly, but Adrian activates his face-down "Dimensional Prison" to remove "Dreadmaster" from play. At the end of the Battle Phase, the effect of "Deep Diver" activates, letting Adrian place a card from his Deck on top of his Deck.

Turn 5: Adrian
Adrian draws "Exodia the Forbidden One". Due to the effect of "Force of Four", he must send it to the Graveyard.[Notes 1] Adrian then activates the effect of "Ritual of the Ultimate Forbidden Lord" from his Graveyard. On this note, Echo steps toward Adrian, agreeing to offer her life force in exchange for Adrian's victory.

Mistakes in the English dub[edit]