"Goodbye, Duel Academia! The Road Judai Chooses" is the one hundred and fifty-eighth episode of the Yu-Gi-Oh! GX anime. It first aired in Japan on October 24, 2007. The episode was never dubbed, but became available to the world with official subtitles via Crunchyroll on August 23, 2016.

Jaden contemplates leaving Duel Academy, as his friends investigate who burned the room of "defective" cards. Jaden again Duels the black-clad man, who calls himself Trueman. Elsewhere, Atticus appears to be having nightmares, and Yusuke Fujiwara continues his mysterious activity.

The episode starts with Jaden at the same volcano he first Dueled Nightshroud at. This time, he is Dueling the mysterious man from earlier, who has a "Meteor B. Dragon" on the field. He attacks directly, and Jaden questions how he got himself into this situation. At this point, time flashes back, and it reveals how Jaden came to be in his current predicament.

Jaden questions Yusuke Fujiwara, who disappears in a burst of light after discovering that Jaden can resist his mind control techniques. However, he leaves behind a small, rainbow-tinted feather, which Jaden grabs. He takes out the cell phone he had previously received, and calls someone, telling them to do background check on Yusuke Fujiwara. At the school, Chazz, Alexis, Syrus and Hassleberry survey the damage the fire caused, with all of them stating that they have some idea who might have started the fire, but can't seem remember the person's name. Syrus goes to get Jaden, believing he can help.

At the Abandoned Dorm, Fujiwara kneels down by a small circle on the ground, and believes something horrible happened here. At the Obelisk Blue dorm, Atticus begins to remember things he had previously forgotten. He recalls rushing into the Abandoned Dorm and finding Fujiwara there, wearing the same mask that Atticus himself would one day dawn under Nightshroud's possession. Fujiwara claims he's discovered the power of Darkness, and that he has cut his hand open. Blood drips onto a circle on the floor and Fujiwara appears to vanish into darkness. Atticus wakes up, and questions whether that was a dream or a memory of a real event. He gets up, and goes to a cabinet, where he keeps the Nightshroud's mask card.

At the Slifer Red dorm, Jaden comments that it's time for him to go. Later, his friends arrive to talk to him, but he is not in his room at all. Hassleberry states they can't rely on him anymore. Since returning from the other dimension, Jaden has changed, and seems to be avoiding them. In Chancellor Sheppard's office, Jaden informs Sheppard at the he's leaving, and Sheppard questions why - he'll be graduating in less then half a year. Jaden replies that he doesn't wish to cause Duel Academy any more trouble. As he turns the leave, the phone rings, and Sheppard answers. It's for Jaden, and Sheppard tells him there's someone who wishes to meet with him before his departure. Sheppard states that if Jaden doesn't go meet with them, then he won't accept Jaden's request to withdraw from Duel Academy. 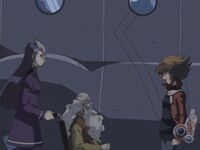 Jaden talks with Kagemaru and Sartorius.

Jaden walks near the volcano, and a helicopter lands near him. Sartorius exits, pushing Kagemaru in a wheelchair. Surprised to see them, Jaden asks why they called him here. Kagemaru replies that the matter is important, but that wanted to avoid eavesdroppers. Kagemaru reveals that they have need Jaden's help with something. Jaden replies that he's leaving the island, and that they should ask someone else. Kagemaru says that what's happened is not Jaden's fault. Sartorius reveals that he had a premonition and called Chairman Kagemaru about it. This is odd, as when The Light of Destruction left Sartorius, it took his powers with it. Kagemaru says that his research time uncovered evidence that something would soon take place on the island, a tremendous release of energy, similiar to an earthquake.

Sartorius states his theory - the incidents of the previous years - the revival of the Sacred Beasts, the attack by The Light of Destruction, and Yubel's rampage across the dimension all centered on this island. Due to this, pressure has built up, and another incident will soon occur when the pressure releases. Kagemaru says that Jaden leaving will not stop the event from happening - and thus he requests that he stay to help. He also theorizes that this is their punishment for misusing Duel Monsters. Sartorius also states that they know that Jaden is fused with Yubel. The ground begins to shake, and the black-clad man Jaden previously Dueled appears to literally rip a hole into the fabric of the dimension and steps out, with the hole closing behind him. Jaden asks who he is, and the man replies that it's difficult to say, as he has no name. He suggests he be called Trueman, as he speaks the truth, or Mr. T for short.

Trueman states that the three of them have come too close to the truth, and that he must eliminate them. Jaden urges Kagemaru, Sartorius, and their bodyguards to leave, while Jaden distracts Trueman, who uses his power to cause the volcano to shoot flaming rocks at the helicopter. Jaden activates his Duel Disk, and Summons "Elemental Hero Neos". Jaden's eyes briefly glow the yellow of The Supreme King, before turning the same bichromatic style as Yubel's. Neos' spirit manifests itself physically and shoots beams of energy at the rocks, protecting the helicopter. Neos fires another beam at Trueman himself, who disappears, reappearing in a different spot and appearing to manifest out of black Duel Monsters cards. He activates his Duel Disk. The ground around Jaden begins to fall, leaving him with only a small amount of space, with sheer drops into lava to three sides of him, and Trueman blocking the fourth.

The Duel begins, and Trueman plays the same seemingly suicidal strategy as last time, damaging his own Life Points to Summon powerful monsters via "Dark Archetype". However, he also uses "Draining Shield" to circumvent some of the damage. He ultimately Summons "Meteor B. Dragon", and Jaden wins using "Soul Union" to increase the ATK of "Neos". Trueman disappears in a puff of black cards again. Then it shows Trueman conversing with what is seemingly a clone of himself. They comment that Jaden is much more powerful than expected. Jaden receives another phone call, and his contact is revealed to be Axel Brodie, who has Jaden's requested information about Yusuke Fujiwara. He was a Duel Academy student - one of those who vanished at what is now the Abandoned Dorm. Atticus has now journeyed to the Abandoned Dorm, and Fujiwara reveals himself to him.

Trueman then activates the effect of "Dark Archetype" to send "Twinheaded Beast" from his hand to the Graveyard and Special Summon "Meteor Dragon" (1800/2000) in Attack Position. "Meteor Dragon" attacks directly (Jaden 4000 → 2200). Trueman then Sets a card.

"Mudballman" attacks "Meteor Dragon", but Trueman activates his face-down "Draining Shield" to negate the attack and increase his Life Points by the ATK of "Mudballman" (Trueman 2200 → 4100). Jaden then activates "Fusion Shot" and equips it to "Mudballman". Now once per turn, Jaden can remove from play one of "Mudballman's" Fusion Material Monsters from his Graveyard and inflict the removed monster's ATK as damage to Trueman. Jaden activates the second effect of "Fusion Shot" by removing from play "Clayman" from his Graveyard (Trueman 4100 → 3300). Jaden then sets a card.

Turn 4: Trueman
Trueman draws "Polymerization" and subsequently activates it to fuse "Meteor Dragon" with "King of the Swamp" (who acts as the substitute for "Red-Eyes Black Dragon" due to its own effect) in order to Fusion Summon "Meteor B. Dragon" (3500/2000) in Attack Position. "Meteor B. Dragon" attacks and destroys "Mudballman" (Jaden 2200 → 600).

Turn 5: Jaden
Jaden draws a card and subsequently sets it.