"Shall We Duel? An Invitation to a Pair Duel" is the one hundred and sixty-first episode of the Yu-Gi-Oh! GX anime. It first aired in Japan on November 14, 2007. The episode was never dubbed, but became available to the world with official subtitles via Crunchyroll on August 29, 2016.

The junior students at Duel Academy organize a Tag Dueling tournament, where the senior students Duel against the junior students. Jaden Yuki ends up paired with Alexis Rhodes, and the two are unable to function as a team, as Jaden does not cooperate with Alexis, and simply wins all of the Duels without her help, even when she sets up strategies that could take advantage of the cards they both hold.

Blair, Hassleberry and several other students have been assigned to take pictures of each student who will soon graduate for the class yearbook. They also begin to plan a graduation party for the third-year students, as well as a Tag Dueling tournament. Hassleberry asks Alexis to find Jaden and invite him, as they have been unable to locate him or get his picture. After graduation, Alexis plans to stay at Duel Academy as a research student. However, Chancellor Sheppard wrote to the headmaster of an American Duel College, and they have agreed to accept Alexis as a transfer student should she be interested. Looking through pictures on her computer from her first year at the Academy, she comments that she's not seen Jaden smile as he does in such pictures in a long time.

Jaden is sitting on a rock, fishing, Pharaoh at his side. The spirit of Professor Banner emerges and questions whether Jaden should be relaxing that much. He responds that both Maximillion Pegasus and Kagemaru are cooperating with him, but he cannot take any further action until Axel discovers something more in his investigation. Alexis and Blair finally locate him, and force him to take some pictures for the graduation album. After this, Jaden walks away, not eager to spend any more time than he has to among others. Alexis tries to convince him to be more cooperative, but he ignores her altogether. Blair reveals the Tag Dueling tournament they are planning and urges him to participate. Jaden responds that he will, if "he feels like it." 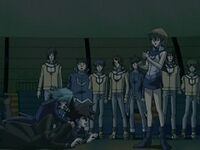 Syrus and Chazz fight over who will be Alexis' partner.

On the day of the tournament, Jaden contemplates attending as he wanders the halls, looking through his Deck and commenting on "the friends he has fought with", not referring to his human friends, but to his cards, such as "Winged Kuriboh" and "Elemental Hero Flame Wingman". Hassleberry reveals the rules for the tournament. Teams of two, consisting of one boy and one girl will be formed. Senior students must pair together, and junior students must pair together. Each team shares one field between the two partners, and each partner may attack with one another's monsters and utilize any Spell and Trap Cards their partner has Set as if they were their own. Chazz and Syrus begin fighting over which of them Alexis will partner with, and she ultimately decides to leave. Chazz tells Syrus to pair up with Jaden since he has always been for him. Syrus still holding Chazz angrily questions why should he pair up with a guy. As she nears the door, Jaden enters, having finally decided to come. Assuming Alexis has chosen Jaden as her partner, Hassleberry announces the pairing as official. This leaves both Chazz and Syrus without partners, so they do not participate. 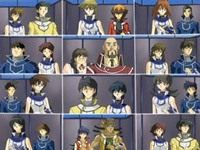 Jaden and Alexis' first Duel is against Chancellor Sheppard and Ms. Dorothy, who reveal that they were allowed to participate in the junior student block specifically to Duel them. Sheppard Summons his "Cyber Ogre 2" on the first turn. Alexis Summons a monster in Defense Position and Sets "De-Fusion", thinking Jaden can use it on his turn. Ms. Dorothy appears not to know how to Duel, and Summons "Marshmallon" in Attack Position and does not attack with Sheppard's "Cyber Ogre 2". Jaden defeats them on his first turn, using "Elemental Hero Darkbright" and his own "De-Fusion", as he does not bother to check what Alexis had Set, even after she asks him to do so.

Hassleberry and Blair are partners, and defeat both Mindy and Jasmine along with their unnamed partners back-to-back. As his "Dark Tyranno" finishes off the opponent, they watch Jaden and Alexis' next Duel. Alexis equips "Cyber Angel Benten" with "Ritual Weapon", while their opponent Summons "Stone Statue of the Aztecs" and equips it with "Mist Body", preventing it from being destroyed in battle. She has "Mystical Space Typhoon" Set. Once again, Jaden does not check the Set card, and instead uses "Gift of the Martyr" to Tribute "Cyber Angel Benten" in order to power-up "Elemental Hero Flare Neos" after playing "Neo Space" and "H - Heated Heart". He then uses "Flare Neos" to attack "Stone Statue of the Aztecs". Although it was not destroyed due to "Mist Body", their opponents still took Battle Damage as "Flare Neos" was affected by "H - Heated Heart". The male opponent is then knocked down as his team's Life Points drop to 0. His teammate asks if he is okay. Jaden then apologizes to the group if he did any harm to them before returning to Alexis's side.

When Jaden heads back to Alexis, he is shocked that Alexis is upset with him. Jaden questions why is she angry. Alexis explains that even though her "Benten" was powered up by "Ritual Weapon", Jaden Tributed it like it was nothing. Jaden notes they still won. Alexis tells him it isn't all right. Though they are consistently winning, they are not functioning as a team, which is the whole point. Alexis tells him to trust her as a partner. Jaden tells her to trust him as he is trying to win 100%. Alexis gets even more angry at this, which leaves Jaden shocked and confused by what Alexis told him.

Turn 1: Sheppard
Sheppard draws "Cyber Ogre". He then activates "Polymerization" to fuse his two "Cyber Ogres" together in order to Fusion Summon "Cyber Ogre 2" (2600/1900) in Attack Position. Sheppard then Sets a card.

Obelisk Blue Boy's turn
The student draws. He then Normal Summons "Stone Statue of the Aztecs" (300/2000) in Defense Position. He then activates "Mist Body", equipping it to "Stone Statue" and granting it immunity to destruction by battle.