"The Graduation Duels Begin! Neos Versus Horus the Black Flame Dragon" is the one hundred and sixty-eighth episode of the Yu-Gi-Oh! GX anime. It first aired in Japan on January 4, 2008. 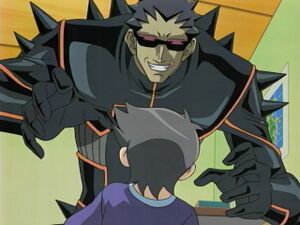 Trueman takes Tsutomu to the World of Darkness.

In Domino City, a small boy named Tsutomu cries, bemoaning the fact that he can't become stronger as a Duelist. His eyes briefly glow blue, and a strong wind comes through his window, blowing his cards onto the ground. He goes to pick them up and his "Gigobyte" card turns black. Trueman appears before him and informs him that his grief, anger and pain has tainted the card. He recommends that Tsutomu accept the darkness in his heart - in this way, he'll become stronger. Trueman disappears, taking the form of the whirlwind of black cards again, and engulfs Tsutomu. His parents go to check on him, and Tsutomu tells them not to worry, but to follow him to the World of Darkness.

When Jaden returns to the Slifer Red dorm, he finds a group of students waiting for him. A second-year Obelisk Blue student named Daigo Sorano challenges him, stating he's always dreamed of Dueling Jaden and informs him that the large group of second-year Obleisk Blue and Ra Yellow students behind him also wish to Duel him. At the Obelisk Blue dorm, Alexis, Syrus and Chazz find themselves similarly popular targets, as students crowd around, wishing to Duel them. Atticus is also attempting to find an opponent, and is then cornered by what appears to be the entirety of the girl's dorm, save Alexis, who all wish to Duel him.

The Duel between Jaden and Sorano begins, and Sorano mentally thinks that he's studied Jaden's strategy and believes he has a counter that can defeat him. Sorano is playing a Horus Lockdown Deck, and Summoned "Horus the Black Flame Dragon LV8" by the end of his first turn. This card can negate the activation of Spell Cards, so Sorano believes that will prove to be the key victory, since much of Jaden's strategy revolves around "Polymerization". Axel is sitting a van in Domino City, several computer monitors around him detailing the residents of Domino. One by one, the names of the residents begin to vanish. He calls KaibaCorp, but there is no answer, and it shows a list of employees on clipboard, which vanish one by vanish, leaving only Seto Kaiba's name behind. The city appears completely empty save for Axel himself.

At the Duel, Jaden plays "E - Emergency Call", which is negated by "Horus", but Jaden reveals he knew that would happen, and uses the opportunity to remove "E - Emergency Call" from play to Special Summon "Spell Striker". Sorano then seals the effect of Trap Cards with "Royal Decree", and reduces Jaden to 1000 Life Points. He then activates "Sealer Formation" to add "Stop Defense" to his hand during his Draw Phase. He is happy and confident since on his next turn he'll finally defeat Jaden. Jaden however says that he has evolved his dueling since he first got to the academy. He then wins by using "Contact Out" to Special Summon "Elemental Hero Neos" and "Neo-Spacian Flare Scarab" after destroying "Horus" with "Elemental Hero Flare Neos" via Contact Fusion (which does not use any Spell or Trap cards). After his loss, Sorano wanders through the forest, wondering how his calculations failed him. Because of his anger, his Deck turns black, and Trueman appears before him. Sorano questions who he is, and he responds that he was awakened from the darkness of Sorano's heart. He changes his form, now looking identical to Sorano himself, and states he'll need to get rid of the original. He activates his Duel Disk.

Jaden defeats a Ra Yellow student using "Elemental Hero Sparkman" and then notices a flock of black birds over the forest. Trueman defeats Sorano, attacking directly with "Dark Archetype" to win. The black birds swoop down on him. Jaden has a vision as his eyes change to the bichromatic style of Yubel, and he sees Sorano and other students engulfed in blackness and asking for help. His next Duel is supposed to start, but Jaden tells them all they'll have to continue tomorrow, and calls Tyranno Hassleberry to follow him. The two run off. They arrive where Sorano was defeated by Trueman, and find a pile of black-tainted cards. Jaden receives a call from Axel, who informs him of the strange going-ons in Domino City, and requests Jaden join him there. Jaden tells Hassleberry to locate Sorano, and runs off towards the docks. On his way, he calls Chancellor Sheppard, telling him it's an emergency, and he's borrowing one of the school's speedboats. Axel sees Tsutomu and attempts to question him on what's happening as he's the only resident Axel has located. Tsumotu runs, and leads him into a trap. He's surrounded by what appear to clones of Tsutomu, and they merge into their true form - Trueman.

Turn 1: Jaden
Jaden draws "Dandylion" and subsequently Normal Summons it (300/300) in Defense Position. He then Sets a card.

Turn 4: Sorano
Sorano draws "Stop Defense" and subsequently activates it to switch one of Jaden's "Fluff Token" to Attack Position. "Horus the Black Flame Dragon LV8" attacks the Attack Position "Fluff Token", but Jaden activates his face-down "Secret Mission", which will let him choose on either making Sorano attack one random monster on his side of the field or end the Battle Phase. Sorano, in response, activates his face-down "Royal Decree", whose effect negates the effects of all other Trap Cards while it is face-up on the field. "Horus the Black Flame Dragon LV8" then destroys the Attack Position "Fluff Token" (Jaden 4000 → 1000).

Duel already in progress. Jaden controls "Elemental Hero Sparkman" (1600/1400) in Attack Position, while the student controls no cards and has 300 Life Points.

Duel already in progress. Trueman controls "Dark Archetype" (1400/400) in Attack Position, while Sorano controls no cards and has 400 Life Points.

The names of Trueman's victims include many characters from the Toei or NAS Yu-Gi-Oh anime series, including Miho Nosaka, Tetsu Ushio and Koji Nagumo.