"Farewell, Judai! A Tearful Graduation Ceremony" is the one hundred and seventy-ninth episode of the Yu-Gi-Oh! GX anime. It first aired in Japan on March 19, 2008.

Jaden attends his graduation ceremony and ends up traveling back in time, where he Duels Yugi Muto when he was at his strongest - just after winning the Battle City tournament and acquiring the Egyptian God cards.

As Jaden defeats Nightshroud, what is seemingly the entirety of Duel Academy runs forward to thank and congratulate him. Shortly thereafter, the school gathers for the Graduation Ceremony and results of the Graduation Duels. Dr. Crowler attempts to announce the results, but begins weeping, as he does not want the third-year students to leave. Ultimately, he has to be physically forced from the room by Ms. Dorothy, Nurse Fontaine and Professor Sartyr, as he beings hysterically saying he is against the ceremony taking place. Chancellor Sheppard steps forward to read the results instead and announces that it's a three-way tie between Alexis, Chazz and Syrus. This presents a problem however, as they only have 1 replica of Yugi Muto's Deck to award. In the end, all three opt not to take the Deck, stating that they will continue with the Decks they currently have.

They move on to the Graduation ceremony, and Sheppard calls the second-year representative, Hassleberry forward to give a farewell speech. He too, begins weeping, and has to be escorted out just as Crowler was. Alexis has been chosen to be the representative for the third-years, so Sheppard calls her forward to give her own speech. As she speaks, a montage of flashbacks is shown, with events from all four seasons being played. Alexis states that time moves too fast, and it seems like they only first arrived at the Academy recently. She states no one will ever forget the friends they've made at the Academy, no matter how far away they may become. The ceremony begins, and the students receive their diplomas, before heading to the graduation party at the Obelisk Blue dorm. Axel and Jesse are still present, and they state they'll be leaving to go to their own graduation ceremonies on different days. Yusuke arrives, and apologizes for all the trouble he caused. Atticus tells him he's wrong, Duel Academy will accept the growth and mistakes of any student.

Jaden does not attend the party, and instead begins packing his things up in Slifer Red dorm. The spirit of Professor Banner questions why, and Jaden states his work here is done. He states that he intends to begin traveling, and aid anyone he can with his power to connect humans to Duel Spirits. At the same time, during the party, Alexis, Jesse and Axel have a conversation outside of Obelisk Blue dorm, confident that they will see Jaden again. As Jaden leaves, Winged Kuriboh flies off, and he follows him. He's lead the room where Yugi's replica deck is stored. Waiting for him there is Yugi himself, who tells him it's time to begin the true graduation Duel. He says he is going to test Jaden to see if he has become a Duelist worthy of holding the card that Yugi gave him three years earlier. He states that Jaden has grown into a reliable adult, but that there is something that Jaden has lost, but not yet realized it, and that thing is extremely important. He instructs Jaden to hold "Winged Kuriboh" up to the display case, and that it will lead him to the person who can help him recover what he has lost, somebody that Yugi considers even stronger than himself. 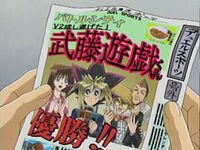 He does so, and is engulfed in light. He suddenly finds him himself in front of Solomon Muto's game shop and finds a flyer on the ground. It appears he's been transported back in time to just after a second version of Battle City tournament ended, as the flyer announces Yugi as the winner. Yugi rushes from the shop, telling his Grandpa that he's off to school, and bumps into Jaden in much the same way that Jaden did to him when they first met. Yugi does not appear to remember Jaden, and states he doesn't remember giving him "Winged Kuriboh", but comments it does resemble his own "Kuriboh" as he compares the cards. He states that the spirit of "Kuriboh" contacted him in a dream the previous night, and told him that he would soon meet someone whom he must Duel. They find a spot to Duel, and Yugi comments that there doesn't appear to be anyone else around, and Jaden notices the clock has stopped. As they shuffle each other's Decks, Yugi states that he senses something in Jaden, and believes that they are similar to one another. As they move to their Dueling positions, Yubel comments that she's impressed that Yugi could sense her, and also says that his Deck will be a problem, with Jaden replying that he could sense powerful energy coming from it and that it must be the Egyptian Gods.

Turn 3: Jaden
Jaden draws "Elemental Hero Bubbleman" and subsequently Normal Summons it (800/1200) in Defense Position. Since Jaden summoned "Bubbleman" while he had no other cards on his side of the field, its second effect activates, letting Jaden draw two cards.[Notes 1] Jaden then sets three cards.

Turn 4: Yugi
Yugi draws "Thousand Knives". He then Normal Summons "Obnoxious Celtic Guardian" (1400/1200) in Attack Position. Yugi then activates "Thousand Knives" to destroy "Elemental Hero Bubbleman". "Dark Magician" attacks directly, but Jaden activates his face-down "A Hero Emerges" to make Yugi select one card in his hand. If it's a monster, Jaden may Special Summon it. As Jaden has only one card in his hand, he Special Summons "Elemental Hero Neos" (2500/2000) in Attack Position. A replay occurs, and Yugi chooses not to attack.