As with all the other Tag Force games, some anime-original cards are present in the game. Anime originals from the previous two games are also present, but not listed here.

There were two downloadable Deck Recipes for this game, which are no longer available to obtain.

When beginning a new save file, the player can only team up with Tier 1 characters. However, Bastion cannot be partnered without doing UMD Recognition with Tag Force or defeating him in duels at least 10 times.

Unlike the previous game, partnering with any alternative version of the various characters has them using different Decks with different cards designated as favorites.

Syrus' Story (Obelisk Blue) Syrus in this adventure focuses more upon dueling other students than his friends, reminding everyone about the need to respect the opponent, as Zane taught him.

Syrus' Story (Ra Yellow and Slifer Red) This Syrus, in contrast to the one above, is one that never grew as a duelist or as a person; he lacks confidence, and has no respect either for himself or for others as duelists, childishly demanding the other party buying sandwiches for him and hiding behind the player character like a shield.

Chazz' Story (Obelisk Blue) This Chazz is who he was at the beginning of the first season — even more arrogant and elitist than usual. His goal throughout this adventure is to take over the school's administration and force out all underperforming students to make it an elite academy. It concludes with him successful, standing at the side of his two older brothers, while the rest of the campus despairs.

Alexis' Story (Angry) -- This Alexis is much more hostile in general, and never fails to mention how she thinks the player character is a slacker at every opportunity, even when complimenting him. Her Deck is based around her Society of Light version's Ice Deck, and her goal is to shape up the player character and get rid of all the "slackers" at the school.

Bastion concludes the adventure with the statement that although he is often forgotten by others, he will continue to fight for what is right, and be an "invisible protector" of the world.

Bastion's Story (Excited) This adventure is a parody of Neo-Jaden's story arc above, with Bastion proclaiming himself to be a defender of truth and justice, hounded by fans at all times (in contrast to how things usually are, where most people keep forgetting he's there). In fact, at one point he expresses a wish that some people would forget him. The closing illustration for this adventure parodies Jaden's as well, with Bastion's Decks for this storyline being Fusion-based Elemental Heroes and builds focusing entirely on the constant and easy summoning of "Elemental Hero Neos".

These pictures are registered in the photo gallery by finishing their corresponding story. The pictures for Tier 2 and Tier 3 characters are associated to several characters, and they only need the player to finish 1 of its characters' stories to be unlocked.

The ending pictures for Tier 2 and Tier 3 characters are signed in the Japanese version.

Some of the Yu-Gi-Oh! Tag Force 3 game boxes come with the Yu-Gi-Oh! Tag Force 2 Promos instead of the correct promo cards. To rectify the problem, players can contact Konami through their support centre. If you supply a scan of the game's proof of purchase and your address, Konami will then send you the correct cards free of charge. Click here to go directly to the support centre. Alternatively, players can contact their local Konami office or one of Konami's distribution partners via regular mail, enclosing a copy of the proof of purchase. Details of local Konami offices and their distribution partners can be found here and here. This option works for Customers who have imported the game as well providing the game was purchased from a reputable dealer and there is a digital copy of the proof of purchase (Paypal sales page, digital recept, etc.). 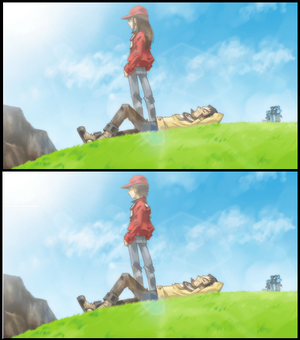 The female and male player characters alongside Bastion, at the end of one of his storylines.