The game features characters and cards from the manga, including Capsule Monster Chess pieces.

The picture of Dark Yugi on the intro screen is taken from the title page of Yu-Gi-Oh! Duel 06565 (Duelist Duel 6): "Let the Duel Begin!". 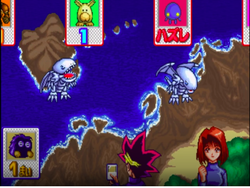 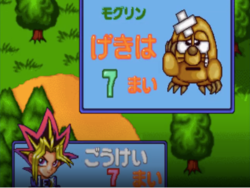 The player chooses a card. Each card has a different number printed on it. More cards scroll horizontally across the screen. Each of them has a different number, which is proportional to the number of the player's card, and one card with the word "lose" (ハズレ hazure) printed on it. Two "Blue-Eyes White Dragons" fly below the scrolling cards. The player can attempt to hit one of the scrolling cards by throwing their card at it. 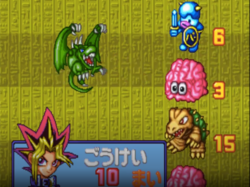 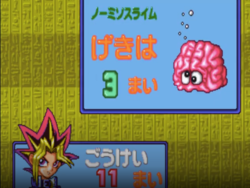 In the bonus battle, the player's card appears on the left-hand side of the screen and a list of monsters with numbers next to them scroll vertically down the right-hand side of the screen. The numbers of these monsters are proportional to the number on the card thrown by the player. When the player gets their card to attack, it will charge into whatever card is horizontally in line with it. The hit card appears at the front of the screen, visibly dazed, and the player receives another payment equal to its number.

The player is able to use the following cards, which have the preceding numbers printed on them.

The following monsters scroll vertically in the bonus battle: