Yu-Gi-Oh! Online: Duel Evolution was a major update from "Yu-Gi-Oh! Online", that changed many aspects of the game. Players now have their own avatars and can explore portions of Domino City from the original Yu-Gi-Oh! series and the Duel Academy from the Yu-Gi-Oh! GX series. The dueling screen and the Deck editor have also been redesigned and improved. 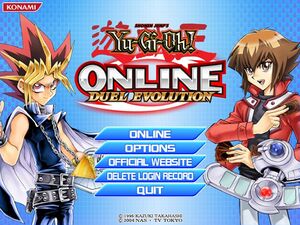 Cards could also be obtained through trading (only if the player has played 36 or more duels) or exchanging Mileage Points (MP). MP is earned in amounts for claiming duel pass codes, and could be used to buy some of the game's more sought-after cards (such as Doomcaliber Knight, and Grandmaster of the Six Samurai). Since the update to Duel Evolution, MP is being done in the form of a Duel Shop, where packs, single cards and custom parts for your avatar can be purchased. Buying packs through these stores gives you 5 random cards from that pack, rather than the usual 1 or 3. 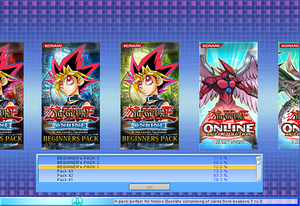 The game includes cards from OCG boosters up to and including Light of Destruction, as well as a variety of OCG promos.

There are 30 player Levels, Levels 1 through 30. Once a player has played at least 36 duels, he or she can advance beyond Level 1, and must to move from the beginner's lobby to the other lobbies where all players Level 2 and above play. 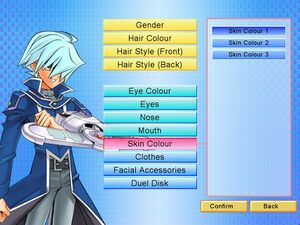 These championships are held once every season (excluding Fall). A preliminary tournament is held and the top 16 duelists go into the Final Tournament where they play a knock-out tournament until they lose. Qualifiers are awarded with cards based on what place they arrived in. 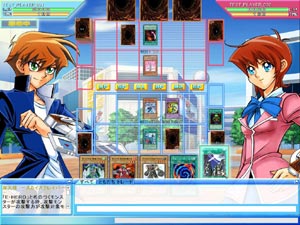 These are held yearly and offers prize cards depending on how many times you win over a 24 hour period.

This is an online purchase that is equivalent to 5 Duelpasses (150 Duelpass points). The 5 cards gained from this type of Duelpass are chosen randomly from a set. At one point, sale of the Duelpass 150 was suspended in the United States due to fraud, but since the release of Duel Evolution, the Duelpass 150 is available in United States again.

The USB Duelpass Key is equivalent to 3 Duelpasses (90 Duelpass points). It is a USB device that is sold in retail stores in the United States, such as Toys 'R' Us and Target. It works like a standard USB flash drive, except it only contains the information necessary to transfer game credits to your account. A CD-ROM with the full version of the game is included in the packaging for the USB Duelpass Key. The flashdrive itself has only 128K or so of memory, unusable for anything but the duel pass credits. The 3 cards gained from this type of duelpass are chosen randomly from a set. The USB Duelpass Key is sold only in the United States and Mexico. Players in other locations must get duelpasses from one of the other methods or buy them from a third party.

The SMS Duelpass is available in the United Kingdom to date and for a charge of £1 you gain 15 Duel Points and 10MP. It's a quick and popular way of obtaining Duel Points.