Yu-Gi-Oh! Power of Chaos: Joey the Passion is the third Yu-Gi-Oh! game for PC. It is also the final game of the Power of Chaos game series. The game features 771 cards, including 234 new cards and 466 cards which were introduced in the previous two games of the series.

This game features Yugi's friend Joey Wheeler as the opponent and typically urban themed menus and fields. The game also adds new dueling choices, new dueling options and more Decks for the opponent, making this the Power of Chaos game with the most content.

The cards from the previous two games, if installed, are included. New game features include a ranked difficulty for the computer opponent, denoted by a star gauge in the Duel menu, which ranks from 1 star to 9. As you win duels, the difficulty increases, and the opponent swaps his Deck for a more potent one every time this happens. Later difficulty levels (8-9) allow the opponent to use different Decks in that same level. Losing consecutive duels results in decreased difficulty for the first time in Power of Chaos games. Other options include allowing the opponent to use cards from the previous two games, increasing the difficulty. Also, the option to make many Limited cards Forbidden is given, making the game more balanced. One other new addition to the game is that when you win cards that you already have, you may have a choice of getting different cards, or keep the ones you've earned. This can only be done when every card you win in a match or one card in a single duel is a common card, not new. Last, you can also duel a friend via LAN or via Gameranger. 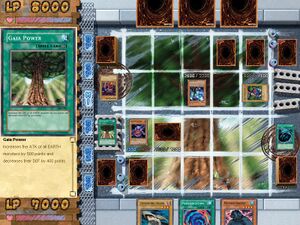 Theses quotes your opponent use during the game.

Quote 1: Joey Wheeler doesn’t take a back seat to nobody! It’s time to duel!

Quote 2: Come and bring it! I’ll take ya on anytime anyplace!

Quote 3: Listen up, a true duelist doesn’t back off from nobody cuz only cowards don’t stand up to a challenge! You betta come strong cuz it’s time to duel!

Tie: It’s a tie! If you wanna duel me again, name the time and place and I’ll be there

Quote 1: Look buddy, you gotta work harder and put yourself into the deck! Once you learn all about the heart of the cards, I can guarantee that you’ll win.

Quote 2: Let me give ya some advice. I didn’t win cuz I’m the number one duelist in da world I won cuz you stink.

Quote 1: Hey hey! Gimme one more match! I know I can beat ya this time!

Quote 3: Argh! Man, I got totally whooped! But I’m never gonna quit as long As I got my whole future ahead-ame.

Quote 1: Alright! With this, victory is in the bag!

Quote 2: This card used to be one of my opponent’s precious cards. Note: Refers to cards that Joey got from opponents in the anime.

Quote 3: Yeah! This is the card I’ve been waiting for!

Quote 4: I offer two of my monsters on the field as a tribute! Note: For monsters with 7 or 8 stars.

Quote 5: I offer my monster as a tribute! Note: For monsters with 5 or 6 stars.

Quote 9: Oh-Kay! I offer two monsters as a tribute! Note: For Fusion Summon, although there's a mispell here.

Quote 11: As a thousand years pass by, my legendary dragon become smarter and stronger! I summon Thousand Dragon!

Quote 13: I ain’t gonna get taken down that easy!

Quote 14: TA-DAAA! I activate my handy-dandy Kunai with Chain! My monster’s attack points increase by 500 points!

Quote 19: I activate my spell card! Note: Quotes 15-18 are used when you do something that triggers a trap/magic card.

Quote 26: I’ll just go along and set this little card here. Let me give you a little hint. Better be careful, cause this card’s a trap. Note: After Joey’s skill advances once the odds of this being true decrease from 100% to about 50%.

Quote 28: I’m gonna resurrect a monster from the graveyard!

Quote 29: It feels soooooooo good to snatch victory from the jaws of defeat!

Quote 31: Uhhhhh... NO! Note: When you destroy one of his good monsters.

Quote 34: Aaaaa! I better think of something fast, I’m running outta options! Note: When his LP are low.

Quote 41: The effect’s gonna activate at the same time!

Quote 50: Gonna have to risk it all I summon Time Wizard!

Quote 55: I hope Lady Luck is on my side I activate Graceful Dice!

Quote 57: This card's gonna turn the tables, Shield and Sword!

Quote 58: Hehehehehe! You fell right into my trap, I activate Giant Trunade!

Quote 59: It’s all or nothing, I activate Skull Dice!

Quote 60: Voila! I bet you didn’t think I was gonna activate this Graverobber.

They may be used in the following manner: