Yu-Gi-Oh! Power of Chaos: Kaiba the Revenge is the second Yu-Gi-Oh! game for PC also it's the second one of the three Power of Chaos game series. The game adds features 466 cards, including the 155 cards from the previous game, Yugi the Destiny and 311 new cards. 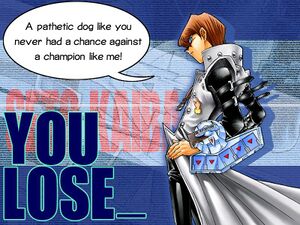 Here are some combos that may prove useful in duels. New combos that use these same basic techniques may also be discovered.

This combo allows you to get rid of one of your opponent's monsters and also summon and attack with your own powerful monster. "Tribute to The Doomed" and "Monster Reborn" are necessary for this combo.

Using "Pot of Greed", this combo allows you to draw a pair of cards of your choice from the top five cards in your deck. In addition to "Pot of Greed", "Big Eye" is also necessary.

This combo works with monsters that can attack your opponent directly, such as "Jinzo #7". "Axe of Despair" and a monster that can be used for direct attacks are necessary.

This combo is a counter-combo, designed to be used in response to an opponent's attack. The "Tailor of the Fickle" card is necessary.

This combo allows you to force your opponent to discard their hand. "Robbin' Goblin" and a monster that can be used for direct attacks are necessary.

This combo sends your opponent's monster to the Graveyard, and at the same time allows you to add a monster to your hand. "Share the Pain" and "Witch of the Black Forest" are necessary for this combo.

(You begin with "Monster Reborn", "Mystical Space Typhoon", "Tribute to The Doomed", "Kazejin" and "Negate Attack" in hand. Youropponent begins with a "Vorse Raider" in attack position on his field;you will draw "Block Attack" at the beginning of the round.)

First, activate "Tribute to The Doomed", and discard a powerful monsterfrom your hand. (activate "Tribute to The Doomed", discard "Kazejin")A powerful monster on your opponent's Field is destroyed.(destroy "Vorse Raider")Then, activate "Monster Reborn" and return the monster you discarded from your hand to the Field. (activate "Monster Reborn"; you may only select "Kazejin") Now, use this monster to attack.

(You begin with "King of Yamimakai", "Pot of Greed", "Beautiful Headhuntress", "Block Attack" and "Giant Red Seasnake" in hand; "Big Eye" in defense position on the field. You will draw "Share the Pain" at the beginning of the round.)

(You begin with "Mesmeric Control", "Corroding Shark", "Axe of Despair", "Bean Soldier" and "Fake Trap" in hand; "Jinzo #7" in attack position on the field. Your opponent begins with a "Prevent Rat" in defense position on his field.)

(You begin with "Monster Reborn", "Mesmeric Control", "Faith Bird", "Dragon Seeker" and "Stim-Pack" in hand; "Maha Vailo" is set in an attack position on the field while "Tailor of the Fickle" is set in a face-down position on the field. Your opponent begins with "Blue-Eyes White Dragon" in attack position on his field and will equip this monster card with "Axe of Despair"; he will lose 50 Life Points by the end of the "Fickle Fate" combo tutorial.)

(You begin with "Mesmeric Control", two "Block Attack" cards, "UFO Turtle" and "Jinzo #7" in hand; "Robbin' Goblin" is set in a face-down position on the field. Your opponent begins with a "Prevent Rat" in defense position on his field; you will draw "Mystical Sheep#1" at the beginning of the round, while opponent will discard "Negate Attack before the end of the "Goblin Ambush" combo tutorial.)

(You begin with "Block Attack", "Stim-Pack", "Dragon Seeker", "King of Yamimakai" and "Share the Pain" in hand; "Witch of the Black Forest" in defense position on the field; and three "Giant Red Seasnake" cards in the Graveyard. Your opponent begins with a "Prevent Rat" in defense position on his field; you will draw "Mesmeric Control" at the beginning of the round.)

Theses are the quotes Kaiba says during the game (taken from the game's data files):

Quote 1: "Let's see if you're worthy of calling yourself a duelist."

Quote 3: "If you even think for a second you're going to win, you're lying to yourself."

Quote 1: "You lost, but, you've earned my respect as a duelist."

Quote 2: "I compliment you on making it this far, but you'll never be able to defeat me."

Quote 3: "Drill this into your head! Your dueling skills didn't beat me, I only lost because you had the luck of the draw!"

Quote: "I can't believe I let a miserable twerp fight me to a draw..."

Quote 1: "Prepare to feel the touch of cold steel, as I summon my Vorse Raider!"

Quote 2: "I summon my faithful servant, La Jinn the Mystical Genie of the Lamp!"

Quote 3: "With this card, I will eradicate you into oblivion." - About to Tribute Summon.

Quote 6: "I offer two of my monsters on the field as a tribute."

Quote 10: "That's impossible!" - You are about to Tribute Summon or Special Summon from your hand.

Quote 11: "This card represents my pride and soul as a duelist... I summon my almighty Blue-Eyes White Dragon!"

Quote 14: "Ahahahahahah! Let me introduce you to my ultimate servant!" - Chooses Blue-Eyes Ultimate Dragon as the Fusion Monster to be Fusion Summoned.

Quote 17: "I switch it to Defense Position."

Quote 18: "It's all over, for you." - Destroys your Level 5 or higher monster or is about to Tribute Summon.

Quote 21: "The effect activates at the same time."

Quote 22: "Flip! Unfortunately for you, your attack triggered my monster's effect!"

Quote 23: "Your pathetic attacks will never reach me, my Ancient Lamp's effect activates!"

Quote 27: "How would you feel, when one of your minions decides to serve me? Well, you're about to find out. I activate Soul Exchange!" - Following Quote 24

Quote 39: "Chain!" - Activates a Quick-Play Spell or Trap Card in response to your card's effect.

Quote 46: "Don't tell me you're trying to resurrect it!" - You activate a card that Special Summons a monster from the Graveyard.

Quote 48: "Wh-What!?" - You activate a Trap, Flip Effect or Special Summon a monster.

Quote 51: "Gwaaah! - You inflict high damage to his Life Points.

Quote 53: "Gwaaaaah! How dare you!?" - You inflict high damage when he has very low Life Points.

Quote 54: "Gwaaaaaaaaahhhh!" - His Life Points are reduced to zero.

You can use them in the following manner: